[email protected] - The Blonde, the GPS and the Tourbillon


[email protected] - The Blonde, the GPS and the Tourbillon

If thereâ€™s one thing that I love about the weekend, itâ€™s the Sunday news-papers. If Iâ€™m in Geneva, Menton or even on that remote lump of rock lovingly referred to as Guernsey, I get The Sunday Times and a local paper to see if Iâ€™m in the obituary column and check whether or not Iâ€™ve won the lottery â€“ although I suppose if Iâ€™m not in the obituaries Iâ€™m already a winner, right?
Recently, in The Sunday Times, neatly tucked in behind a business page that had an article with the intriguing sub-title of â€˜A men-only bash with lingerie models is just business, says city firmâ€™, there was this headline: â€˜Laser clocks stay spot on for 2bn years.â€™ 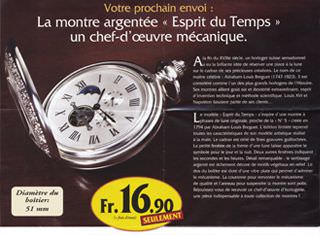 Apparently, some US scientists have created an Optical clock that is accurate to within one second every 1.7 billion years. Without wishing to appear pedantic, how the hell can anyone presume to claim that sort of accuracy without having tested it for at least a million or two of those years? And what about the clockâ€™s functioning in two billion years from now? When the Atomic clock was invented in 1955, that was proclaimed accurate to a second in a more acceptable duration of 300 years. But in around two billion years, who knows what can go wrong, the elastic band that holds the bloody thing together may have worn or the two AA batteries that make it tick may need replacing.
Okay, I know, I can hear you, it probably doesnâ€™t have an elastic band or batteries. So what, the argument still holds true doesnâ€™t it? But to show my willingness to move with the times, this, in laymanâ€™s language, is basically how it works: a laser is fired at an atom which then vibrates at a high and constant frequency and itâ€™s the frequency of the vibrations that measure time. But as to how often the laser is fired at the atom is another mystery altogether â€“ not to mention the fact that youâ€™ll have to be a hell of a marksman to hit an invisible atom.
Be that as it may, it appears that one of the most exciting elements that will emerge with the Optical clock will be the improvement to global pos-itioning systems (GPS) which track planes, ships, cars and shows you the route to your favourite watering hole. What will happen is GPS appar-atuses will receive microwave signals by satellite and by measuring the time these take to arrive, your position can be pinpointed to anywhere between one and ten metres.
Personally, if I was sitting in my car chatting up the blonde, the last thing I would want is a microwave beaming down on me given that I was prob-ably close to boiling point already. On the other hand, it appears that the improved satellite technology will enable you to have a driverless car, leaving your hands free for â€¦ if you see what I mean. A quick chromatic scale on the keyboard of your GPS and youâ€™re en route to your favourite disco, then a few drinks and a rave later you are on the way to an out of the way beauty spot whilst youâ€™re in the back seat of the car with the blonde. You then return home without having broken any laws or anything more ser-ious than your marriage vows.
The only problem with all this is that your missus will more than likely have her own GPS system that can not only track you down, but also inform her as to whether or not the blondeâ€™s wearing Victoriaâ€™s Secret, not to mention how and where to beam down those malicious microwaves â€“ which will give an entirely new meaning to Shirley Basseyâ€™s hit song â€˜Fire down belowâ€™.
Now for something a little different, a tiny morale booster to beat back those economic blues. I recently mailed a form to Editions Atlas in Switzerland agreeing to purchase a mechanical hand-wound â€˜Loireâ€™ pocket watch for CHF 8.90 (thatâ€™s 6 euros). It arrived a week or two later and, surprise, surprise, it works. But the good news doesnâ€™t end there, because, if I accept the next watch from their Heritage Collection â€“ the Esprit du Temps which is nothing less than a tourbillon â€“ at the exorbitant price of CHF 16.90 (11.40 euros), then I donâ€™t have to pay for the Loire watch!
Iâ€™m now waiting with baited breath for the tourbillon to arrive â€“ although I may have to wait 2 billion years before itâ€™s actually in my mail box â€“ and it comes with a distinct absence of microwaves. I may disintegrate from the radioactivity on the luminous hands or become a walking skeleton from corrosive poisoning, but at least Iâ€™ll be the proud owner of a tourbillon for less than the price of a plat du jour in my local brasserie. My sincerest apologies to you Abraham-Louis, but you shouldnâ€™t have invented something that could be proved viable in less than a million or so years!