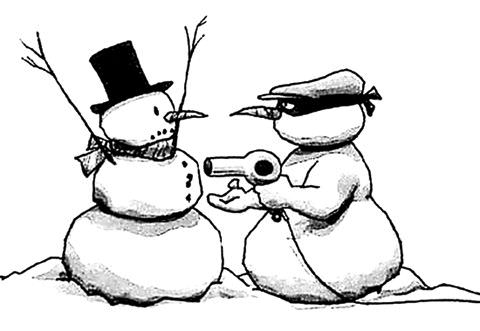 Is there anyone out there in the real world that actually enjoys January? For me, it’s that dreadful time of the year when the costly ceremony of festive present giving and over-eating is finally over and I can get back to being my normal miserable self. Many of you of course will be happily back at work with torn ligaments and a bruised pride from a short skiing break and some lucky people will be recuperating from an over-hyped package holiday to a sun-drenched island paradise where overfed kids kicked sand in your face as they ran to and from their beach mats and marauding mosquitoes enjoyed midnight picnics on your crimson torso.

But now, at last, it’s back to the office for those Monday morning meetings that are such an encouraging alternative to work and the annual January exercise whereby you’re supposed to start afresh by not looking forward, but by looking back. This yearly ritual, carried out with a dour sincerity by the boss, is where you recapitulate and re-live the traumas of the year that you’ve just blundered through, followed by a personal assessment of your contribution to it. This practice is supposed to help you pinpoint your failings, highlight your successes and underline the areas for improvement on a hideously complicated assessment form from the head office that will justify why you won’t be getting a salary increase. Having completed that embarrassing task, you are then expected to implement a plan that you have to instantly devise that will not only improve your underpaid performance, but will be so brilliant in concept that it will transform the company’s bottom line to a black that is blacker than the infamous Hole of Calcutta.

On a more personal note, friends and family will expect you to make that most futile of gestures, the formulation of meaningful New Year resolutions. These vary from stopping smoking to eating less chocolate, participating in the wife’s latest diet from Elle magazine, watching less football on television so that your missus can succumb to the addiction of prime time soap operas, reading a book instead of Playboy, curtailing the e-mailing of inane jokes and photos of half-dressed ladies to everyone and their brother and not forcing your wife to carry the 10-kilo sack of potatoes whilst you reply to a whole host of urgent messages on your Blackberry. Go for it, but, and I speak here from experience, by the time you read this you’ll have inevitably already failed miserably.

For the truly caring, there’s the possibility of joining a charitable organization that tries to make the world a better place in which to live, but unless all the decision makers in the world go through the same ritual as you, nothing is going to change – except an increase in taxes. Those all too familiar and heart-warming headlines concerning war, famine, flooding, avalanches, mud slides, sectarian killings, racism, global warming and religious intolerance will continue to stare out at us from the newspaper and, if we’re honest, there’s absolutely nothing that we can conceivably do that will right the wrongs perpetrated by world’s hierarchy.

You can opt out of the entire process by committing hara-kiri, but if you’re looking for something to get you through those New Year blues …

• After a blazing row with your wife, don’t go to bed angry, stay awake and plot your revenge.
• Be nice to your children because they’re the ones that choose your nursing home.
• Yield to temptation, it may not pass your way again for quite a while.
• Start saying,“Oh, that feels nice,” when the security people frisk you at the airport.
• Stop worrying about getting Alzheimer’s because you’ll get to meet new people every day.
• Being poor is not so bad; at least it’s inexpensive.