By the time you read this, we Europeans will have once again messed about with time and put our clocks forward an hour to benefit from the joys of extra daylight. This bi-annual ritual is called ‘Daylight Saving Time’ or DST – not to be confused with the DT’s, which are the vivid pink elephant hallucinations from which alcoholics suffer.

Personally, I’m not a happy bunny because with the way the weather is at present it will only mean that I’ll see an extra hour of rain or snow every day depending on where I happen to be. At least when it’s dark there’s no obligation to look out the window in the vain hope that a break in the clouds will be sufficiently large for me to dash to the local hostelry without being severely drowned. So why do we go through this annual ritual that millions of people seem to treat with scorn?

To answer that question I switched on my computer, Googled the subject and to my dismay discovered there are 33,400,000 entries on the subject. What I did learn was that Benjamin Franklin was the person that came up with the initial idea of daylight saving time in 1784 when he was America’s ambassador to Paris, although it was, they say, his humorous response to Parisian debauchees’ late night shenanigans and the late night use of candles that brought about his proposal.

The concept was then proposed in a paper to the Wellington Philosophical Society in 1895 by George Vernon Hudson, an entomologist from New Zealand, suggesting a two-hour shift forward in October and a two-hour shift back in March, but there was a bug in that suggestion and it too never came to fruition.

Daylight Saving Time again raised its ugly head in the 1900s via William Willett, an Englishman who enjoyed early mornings and late evenings to either go horseback riding or play golf depending on which of the thirty-three million entries on the Internet you read. He managed to get the idea of moving the clock forward put before Parliament in 1908 but it was rejected as being a preposterous idea. It was proposed again in 1909, 1910 and 1911 with the same result.

Then came World War I and in 1916 Germany went onto daylight saving time to save energy for the war effort. Britain followed on May 17, 1916, and Willett’s scheme of adding 80 minutes in four separate segments, was put in place a month later. Years later the practice slowly caught on until the addition and subtraction of an hour during the year became an institution in the four corners of the globe (hang on, how can you have corners on a globe?). 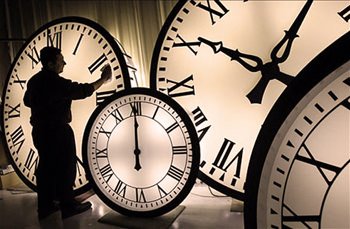 I don’t know how true this story is, but apparently an American Indian on being told the reason for daylight saving time said, “Only the government would believe that you could cut a foot off the top of a blanket, sew it to the bottom, and have a longer blanket.”

Talking, worrying and philosophising about time has intrigued man since Adam and Eve pottered around their garden in their trendy fig-leaf undies and since then philosophers, cosmologists and scientists have continued to delve into the existence of time ever since. According to current thought time hasn’t always existed, it all began with the Big Bang 13.82 billion years ago according to the latest scientific estimates, although Hublot may put the date much later. Out of interest, by adding up the ancestral biblical histories of Adam and Eve, Cain and Abel and Moses etc., James Usher, the 17th Century Archbishop of Armagh in Ireland, concluded that planet Earth was created late on Saturday, October 22, 4004 BC.

Before clicking out of Google and switching off my computer I came across the following quote attributed to Abraham Lincoln that really gave me something to think about: “The trouble with information on the Internet is that you can never know if it’s genuine.” Difficult to know what to believe now isn’t it? All of which reminds me of a delightful story about Adam and Eve.

Adam returned home late one evening and a somewhat peeved Eve screamed, “You’re seeing another woman, aren’t you?” “Don’t be silly,” Adam calmly replied. “You’re the only woman on earth.” Later that night Adam was awakened by Eve tickling his chest. “What the hell are you doing?” he asked. “What do you think I’m doing, I’m counting your ribs!” Well, you’ve go to laugh haven’t you?