[email protected] - ...and you think YOU’VE GOT PROBLEMS?


[email protected] - ...and you think YOU’VE GOT PROBLEMS?

I think it was G. K. Chesterton who first claimed that ‘travel broadens the mind’. Well I can assure you in the period of just one year I have made not one but two mind-broadening discoveries: last year, you may recall, I met a man in Calgary, Canada, with prosopagnosia – face blindness; this year, in the Cape Cod area of the United States of America I almost came face to face with pogonophobia – I say almost because … well let me explain.

On Nantucket, one of the islands off Cape Cod, I was pottering around the over-priced but quaint shops when I espied a boutique with dozens of large round clocks and compasses set into metal housings with thick magnified glass coverings. Intrigued, I entered and began looking around when a young man came up behind me and asked if he could be of assistance. I turned round and said I was just browsing, at which point he immediately lowered his eyes and, without looking at me turned away and said to let him know if he could be of assistance.

Having worked my way around the collection I went over to the desk where the man was shuffling some papers and asked the price of a couple of the pieces. He didn’t look up but walked over to the clocks I’d mentioned and maintaining his interest in either my expensive sandals or my legs (I was wearing shorts) told them the prices. I’m not exactly a George Clooney lookalike but my feet aren’t anything to write home about either. I began to wonder about this fetishism. 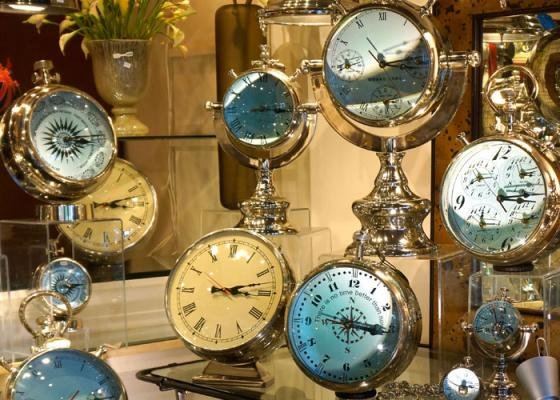 As I turned to leave, the young man said, “Sir, I’m sorry if I appear rude not addressing you directly,’ he explained looking at my feet again, “but I have problem!” Tell me about it, I thought. “A problem?” “Yes, I have pogonophobia.” “Really? Pogowhat?” “Pogonophobia. It’s a fear of beards.” I took a step backwards for fear of having mine ripped out by the roots. “It’s okay, as long as I don’t look at your face,” he said echoing my first wife. Apologising for my hirsuteness I asked if something can be done about his pogowhatsit. “It’s pogonophobia.” He then told my left foot that the first psychiatrist he went to see had a beard and he ran out horrified. “Then I called another psychiatrist and asked the lady who answered if he had a beard. She sounded surprised, said no, so I fixed an appointment. He was the one who told me I had pogonophobia and explained that it was very rare and usually caused by a traumatic experience in childhood.” “And did you discover the cause?” “Yes, after I’d invested a few thousand dollars in his retirement fund. My mother took me shopping one Christmas when I was very small and I was placed on the knee of a Father Christmas in a shopping mall for a photograph. Apparently I cried and the more I cried the closer the beard came to try and console me.” “So what do you do now?” “If I’m really distraught I take a pill to calm me down. Now I avoid looking at anyone with a beard. Unfortunately, white beards are my real nightmare.” I mumbled another apology and turned to leave when he held out a trembling hand. I shook it and whilst he gave my feet a last long lingering look he said he hoped I would visit the boutique again.

Once outside, I scribbled the name of the phobia on a piece of paper and glanced back to see the man mopping his brow with a cloth as he flopped down into the chair behind his desk. The rest of the afternoon passed without incident, but as I made my way to the ferry that would take me back to the mainland I realised that the resort’s other main industry was fishing and fishermen are often heavily stubbled or bearded. Sartre was almost right, Hell is not other people, it’s bearded people!

I know a very naughty limerick about an old man from Nantucket … but I’ll have to tell you that one in private, remind me when you see me. However, here’s an appropriate joke sent to a team at the University of Hertfordshire in the U.K. that had set out to find the world’s funniest joke. Dr Richard Wiseman, a psychologist, conducted the test and after reviewing more than 40,000 entries the winning joke, submitted by Dr Gurpal Gosall, a psychiatrist, was chosen.

Two hunters are out in the woods when one of them collapses. He doesn’t seem to be breathing and his eyes are glazed. The other guy whips out his mobile phone and calls the emergency services. He gasps: “My friend is dead! What can I do?” The operator says: “Calm down, I can help. First, let’s make sure he’s dead.” There is a silence, then a shot is heard. Back on the phone, the guy says: “OK, now what?”

Well, you’ve got to laugh haven’t you?