One of the problems of semi-retirement is that you have so much time to do things that there is a tendency to forget organisation with the result that, despite the best will in the world, you no longer seem to have enough hours in the day to do all the things you promised yourself you would do when you retired.

However, if you have a partner that is ultra-organised in her daily life you don’t have to think about planning anything since it’s done for you. Kate is such a person. A short time ago she mumbled something about making a trip to New York to see her latest grandson and before I could find the time to look at my diary (I still use a real diary in which you actually write) I was comfortably ensconced in a seat on a British Airways flight to New York.

I’m not going to tell you the somewhat unusual name the newcomer has been lumbered with, suffice it to say it sounds like a legal tender allied to a saint, but after oohing and aahing appropriately for a few days as we watched him being fed, burped and changed, we took the ferry from Brooklyn where they live to East 34th Street and made our way to the hustle and bustle of mid-town Manhattan, spent some time shopping then paid a visit to MOMA – the Museum of Modern Art – to see the exhibition of the early paintings of the surrealist René Magritte. 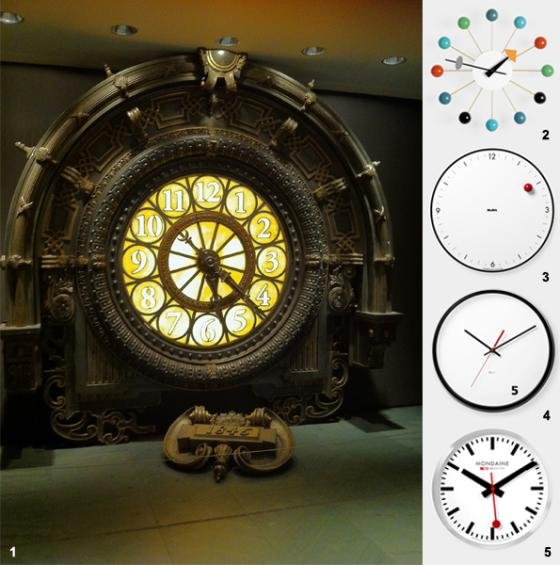 However, just off the main hall I was somewhat surprised to see a huge clock (1). I had the feeling of déjà vu, which wasn’t surprising since I learned that it is one of six large-scale clocks created by Ferretti, the production designer for Martin Scorsese’s film Hugo which is set in a 19th century Paris train station. The clock is based on an illustration in Brian Selznick’s graphic novel The Invention of Hugo Cabret (2007), which in turn was inspired by a clock in the Musée d’Orsay in Paris – which was, of course, once a train station.

One of the clever sales ploys of museums is that you generally pass through the museum shop on the way out and at MOMA I discovered four other clocks that, according to the salesman I spoke with, sell particularly well. The first was the Nelson Wall Clock (multi-colored balls) by George Nelson (2) which was alongside the Timesphere Clock by Gideon Dagan (3); the 5 O’Clock Wall Clock by Tibor and Maira Kalman (4) and finally, I’m pleased to say was the Swiss Railway Clock by Hans Hilfiker (5).

Which brings to mind the story about three salesmen boasting of their sales prowess. The first said that he was so good he sold a colour television to a blind man. Not to be outdone the second claimed to have sold a hi-fi stereo system to a deaf man. The third boasted of his sale of a cuckoo clock to a blonde lady. Somewhat surprised at this mundane sale the two men asked what was so clever about that. The third salesman smiled and said, “I also sold her ten kilos of bird seed!”

Be that as it may, after vainly trying to find the museum where they have all the heads and arms from the statues that are in all the other museums, we left New York on the return flight to London where, because my event manager was no longer with me, I managed to miss my flight to Geneva by queuing in the wrong place. When I finally boarded another flight it was turbulence all the way and I was reminded of a story about the pilot of a passenger plane who suddenly announced that the plane was going to crash.

A woman leapt from her seat, stripped naked, turned to the other passengers and said, “If I’m going to die I want to die feeling like a woman. Is there anyone here man enough to make me feel like a woman? A man stood up, pulled off his shirt and threw it at her saying, “Here, iron this!” Well you’ve got to laugh haven’t you?

A very Healthy and Happy New Year to you all!