Once a year, around Christmas, is usually enough for me. I know many Americans do it at Thanksgiving, but it’s a yuletide event for me. However, this Christmas I had to do it not once, not twice or even three times, but four times! Four times I sat down to roast turkey, roast potatoes, sprouts, peas, chestnut stuffing, bread sauce, mince pies and cream and as if that wasn’t enough, a Christmas pudding doused with brandy. But not just any Christmas pudding, no, it had to be the Michelin-starred chef Heston Blumenthal’s Hidden Orange Christmas pudding that weighs in at 1.2 kilos and contains 550 grams of mixed dried fruit (raisins, sultanas, currants and mixed peel), 1 grated carrot, 1 grated Bramley apple, 100 ml of ale, 3 eggs, 1 tablespoon of black treacle, 115 grams of dark brown sugar, 115 grams of plain flour, 1½ teaspoon of mixed spice, 115 grams of ground almonds and 115 grams of suet. Calories did I hear you say? A few: three thousand nine hundred and seventy-two – yes that’s right, 3,972 calories! I think my waistline bloated two belt notches just writing about it. 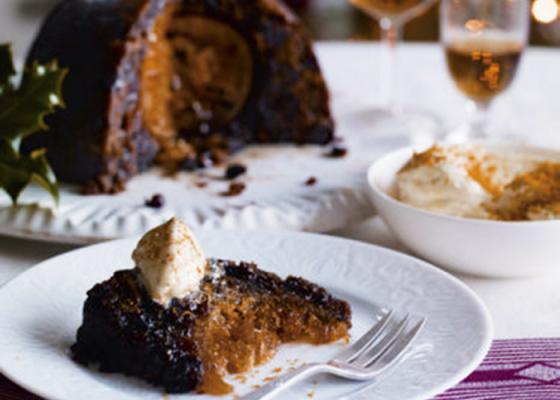 In the U.K. and Guernsey we totalled 16 adults and 10 children and all went as smooth as clockwork but in Geneva, the day I was supposed to collect the turkey, the hairspring must have snapped because the butcher telephoned to say that he didn’t have the five-kilo beast that I had ordered some four weeks earlier. He went further and confessed that he didn’t even have one small turkey.

Personally, I could have made do with steak and chips, a cheese fondue, or even a tin of Heinz beans and sausages, but my youngest daughter had taken the distressing ’phone call in my absence and was close to tears as this annual turkey-fest and present-giving orgy has been a hardy perennial since her birth. I eventually found a fresh turkey (no frozen or defrosted poultry is allowed to cross the threshold) in a supermarket just across the border in France and the late Christmas dinner passed off without any further calamities although, sadly for the girls, there were no Christmas Crackers. In the U.K. Christmas Crackers are inexpensive and in abundance but in Geneva, if you can find any, they cost an arm and a leg and if you try and bring them in on a flight from Heathrow either in your suitcase or your hand luggage, despite their relative innocence, you risk being taken for a suicide bomber.

Christmas Crackers are a very English tradition. They were invented by Tom Smith, who on a trip to Paris in 1840 discovered sugared almonds wrapped in a twist of paper called bon bons and began selling them in London just prior to Christmas. To improve sales he sought something different and added a printed love poem for the ladies, but his eureka moment was when he threw a log on the fire and it started to crackle. By 1847 after many trials and tribulations, that crackle became a cracking mechanism and the cracker was born. Tom’s son Walter introduced paper hats and small gifts into the crackers and the little bits of paper with love poems evolved into corny jokes and riddles such as: What do you get if you cross Santa with a duck? A Christmas Quacker! And why was the broom late for school? He over swept.

However, my favourite story about the origin of a Christmas tradition is how many, many years ago Santa Claus was told by his wife that her mother was coming to stay for the holidays. A little vexed by this news he went into the workshops to see how the elves were doing with their production quotas for the children’s toys only to discover that several of them had gone on strike for more wages and others were off sick. Santa stormed out of the workshops and went to the stables to feed the reindeer where he found two of them were heavily pregnant and the males had broken down the fence and disappeared into the forest. By this time Santa was furious so he went into the pantry for a calming glass of his very old malt whisky to discover that someone had been there before him and emptied the bottle. It was at this point that there was a knock on the front door. Santa opened it to see a gorgeous-looking fairy standing there holding a very large and beautiful Christmas Tree. “Good morning Santa,” she said with a lovely smile. “I’ve brought you this magnificent Christmas tree, where would you like me to put it?” Which is why, tradition has it, there is a fairy at the very top of the Christmas tree. Well you’ve got to laugh haven’t you?