[email protected] - This could leave A BITTER TASTE IN YOUR MOUTH


[email protected] - This could leave A BITTER TASTE IN YOUR MOUTH

What did Thomas Prescher, Menton, oranges and lemons have in common in February this year? The answer is … Jules Verne.

Thomas, who launched his eye-catching creation Nemo Sub I, a steampunk submariner mechanical watch with an automatic-winding bi-axial tourbillon and triple-piece case that is produced mostly from precision machined synthetic sapphire crystal, was inspired by Jules Verne’s Nautilus from his 20,000 leagues under the Sea.

18 carat red gold and palladium are used for this highly original watch case which is divided into three main pieces including a large central tube and two smaller tubes on the sides which indicate the hours and minutes as they are connected by a discreet gear shaft to the cylindrical mechanical movement that is placed inside the larger main tube. The movement has a half-cylinder-shaped automatic rotor that winds in each direction powering the bi-axial tourbillon movement that turns on two axis points in 60-second rotations. At the rear of the main case is a second gyroscopic-style automatic rotor that Thomas Prescher says is used for ‘purely whimsical purposes’: its function is to power the propellers’ shafts located in each of the side tubes which exist to complete the submarine fantasy in the world of Captain Nemo. 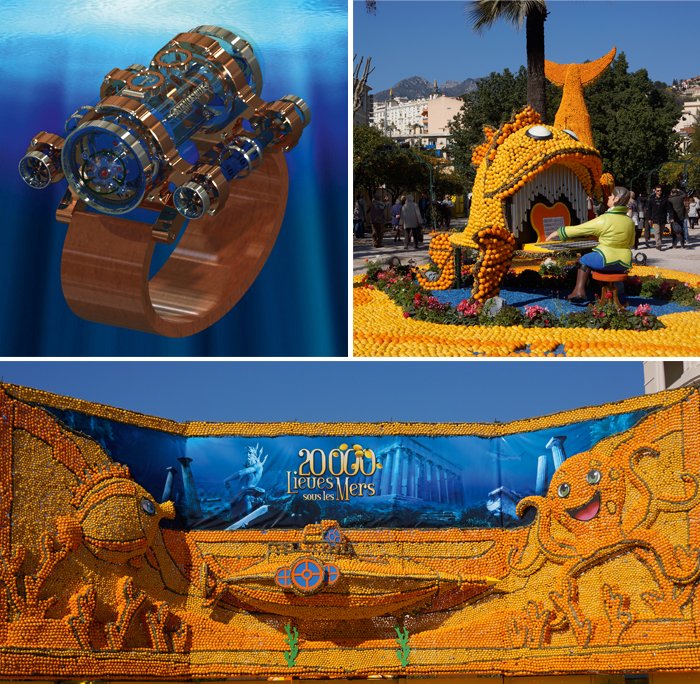 Whilst this science fiction-styled timepiece was being lauded by horological aficionados, Menton was holding its 81st Fête du Citron amidst plaudits by admiring agrarians and, by sheer coincidence unless Thomas has sway with the powers that be on the Côte d’Azur, the theme was Jules Verne’s 20,000 leagues under the Sea. For two weeks flotillas of charabancs and coaches arrived in a murky haze of exhaust fumes which left many an asthmatic’s life expectancy shortened through carbon monoxide poisoning and changed the decorative orange trees in the streets into what looked like a new coal-bearing arborial genus. From the panoramic point of view, the normally sedate palm tree-lined seafront between the old town and the Italian border where the motorized armada was parked was turned into an eyesore that resembled a monstrous mechanical graveyard.

Apart from some 18 carat gold that could be seen around the necks of the fur-coated Italian and German ladies who arrived on a daily basis along with the fresh fish and the newspapers, similarity between the Nemo Sub I and the Fête du Citron ended with the exception of the human tourbillon that was created during certain hours as visitors turned in contemplative circles around the massive exhibits of Captain Nemo playing his organ, the Nautilus, Atlantis, an enormous whale, a giant crab and a gigantic octopus, all of which were depicted using enough oranges and lemons to supply Queen Elizabeth II with enough marmalade for breakfast for the foreseeable future. To create those fruity displays, 75 cubic metres of braided boxwood was used for the basic frames, 100 tonnes of citrus fruit made up the exhibits - around 30 kilos of fruit per square metre – and another 10 tonnes were used to replace any damaged or decomposing fruit during the two weeks of the Fête, a process that we safely describe as lemon-aid. Finally, the thousands of oranges and lemons were held in place by some 500,000 elastic bands and the entire displays, including the floats that are paraded through the town five times during the fortnight, took appropriately 20,000 hours of work to complete.

Which, not unsurprisingly reminds me of the sad tale of two close friends, an orange and a carrot, that were walking down the street when a car completely out of control mounted the pavement and hit the carrot. The orange rushed him to the local hospital and after a lengthy wait a doctor with an ominous look came into the waiting room and said to the orange,“I’ve got some good news and some bad news.” The orange asked for the good news first, and the doctor replied, “Your friend is going to live.” “Thank goodness for that. And the bad news?” asked the distraught orange. The doctor lowered his eyes and said, “I’m afraid he’s going to be a vegetable for the rest of his life!”

Well you’ve got to laugh haven’t you?