[email protected] - AND THE WINNER IS... WITHOUT TEARS


[email protected] - AND THE WINNER IS... WITHOUT TEARS

I’m sure you already know the seventeen winners of the 14th edition of the Grand Prix d’Horlogerie de Genève (GPHG) from the local press and television, a press release by e-mail ‘announcing with pride’ a brand’s win, or you attended the event at Geneva’s Grand Théâtre.

Over the years, Grand Prix has grown from what appeared to be a somewhat biased and subjective awards process for uniquely Swiss made watches to what is now a notarized voting procedure with an objective modus operandi that now includes brands from outside the country’s frontiers. So far, so good.

What I don’t understand is the selection process for the watches. If this is to be a bona fide event, an unbiased Grand Prix, why is it that the brands themselves decide what watch is entered and then pay for the privilege? Okay, the amount is not exorbitant, but by paying five hundred Swiss francs the watch brand buys its participation, it doesn’t guarantee they will receive one of the coveted statuettes, but it does guarantee that they are in with a chance and at least will gain some advertising mileage in the process. Surely if we’re talking about a genuine judgement as to the best watch in a designated category, wouldn’t it be more appropriate for the members of the jury to be making their personal selection from the myriad of new timepieces that appeared during the year thus giving even the smallest of brands a chance, and then, as a unified jury, vote for the winner from all those proposed?

Another element of the event that I believe bothers more than just me is the repetitive and monotonous monologues that the invited political representatives harangue us with year in and year out. As the minutes pass, heads drop, the printed programmes suddenly become an object of attention, the audience fidget in their seats – except those unfortunate enough to be in the first row – and one can’t help wondering if we’re listening to Shakespeare’s Antony proclaiming, “I come to bury Caesar, not to praise him.” We are inevitably told of the importance of the Swiss watch industry and its economic value to the nation, its significance to the low unemployment figures, the number of visitors that come to Switzerland because of its horological reputation. Instead of rehashing the obvious, give us a light-hearted speech that is short, sweet, polished and has at least some semblance of spontaneity. 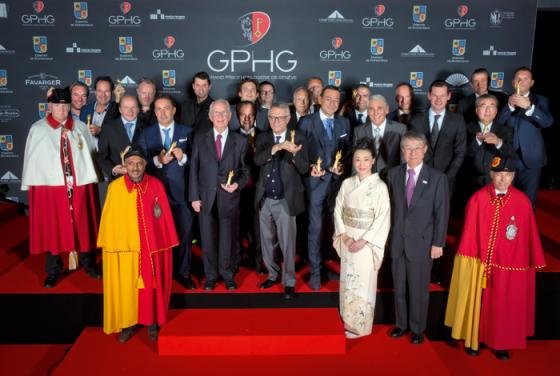 The who’s who of the watch industry, retailers, VIPs and guests and a few hangers-on who attend for the freely distributed champagne in the aftermath of the presentations, all politely but begrudgingly applaud these hackneyed orations out of relief not out of approval. There’s no need to preach to the converted.

This year the Grand Prix was compared to Hollywood’s Oscar night. The Oscars first came into being in 1929, a relatively sedate affair compared to the star-studded flesh feast that it is today, but that’s about as far as the comparison can go. What we get with the Oscars is around three hours of entertainment from one or two show business emcees who not only superbly animate the proceedings with humour and possibly a song and dance, but also obtain audience participation by good-naturedly joking about those peers in attendance. It’s also an emotional affair with lots of tears as many of the winners struggle to thank their mother, father, Uncle Tom Cobley and the lighting engineer and yes, they still love their spouses – until the divorce, that is. But, and it is an important but, if the winners show the slightest inclination to overrun their designated time slot of sixty seconds, music suddenly blasts through the speakers and their stuttering thanks die in the cacophony as they dejectedly and self-consciously trudge off the stage clasping their much vaunted Oscar. It’s called fast-forwarding.

So, to the organizers of the GPHG, for what its worth, here are my suggestions: a very tight time frame for anyone giving a speech that isn’t one of the potential prize winners, and a much shorter one for the winners’ acceptance speeches that, in all fairness, are usually not too long; a more lively, humorous and spontaneous presentation by the emcees with a dash of audience participation; as good as they may be, less of the animated projections that supposedly introduce the various categories; and finally, a more meaningful selection of the timepieces! I rest my case.

Needless to say mentioning the Oscars brings to mind a true story told by Sydney Pollack (you can look it up if you don’t believe me) when Akira Kurosawa, John Huston and Billy Wilder presented the Oscar for the best picture in 1985. Kurosawa was nearly blind, Huston was using an oxygen machine prior to going on stage because of his emphysema, only Wilder appeared to be fit and healthy. The nominees were presented and the sealed envelope was passed to Huston who made no effort to open it and passed it on to Kurosawa, who for whatever reason couldn’t open it so Billy Wilder snatched it, ripped it open and announced that Out of Africa was the winner. Sydney Pollack, who directed the film, came on stage, made his speech and then led the others off into the wings where he heard Billy Wilder mumble, “They had no problem bombing Pearl Harbour, but they can’t tear open a fucking envelope.” Well, you’ve got to laugh haven’t you.