I recently discovered another method of telling the time without looking at a wristwatch: the clinic, not a mechanical watch clinic, medical. I spent seven days in a very pleasant one in Geneva recently - no, you really don’t want to know why - and discovered, after a mere twenty-four hours, precision timing without a watch. 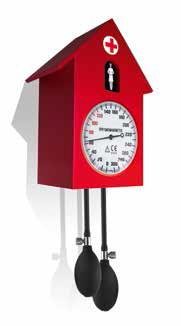 The day of what they called the ‘intervention’ I was roused from a deep sleep early in the morning to take a pre-op pill that would put me back to sleep. It worked because I awoke five and a quarter hours later feeling surprisingly well. The rest of the day was taken up with checks on the tubes that seemed to protrude from most known orifices plus a couple more that had been added for good measure.

A light dinner of consommé and yoghurt was offered and then it was lights out, which is when I began the learning cycle of how to tell the time without a watch. Fast asleep, I was awoken by a nurse who checked my blood pressure, temperature and pulse informing me that all was well and because it was ten o’clock in the evening she was now off duty and would see me the next day. Just after I’d managed to get back to sleep another nurse gently shook me from my troubled slumber, introduced herself as the night nurse, gave me two pills and in answer to my question told me it was midnight. I slept peacefully until the curtains of the room were noisily opened to reveal … darkness. I must have looked alarmed so the nurse informed me that breakfast would be served in an hour’s time at seven o’clock and in the meantime she would help me take a shower, which she did quite expertly by following me into the bathroom manipulating the protruding tubes whilst I sprayed water over my body and half-drowned her.

Breakfast arrived at seven o’clock along with a couple of pills, the cleaners came an hour later, followed by a nurse who checked my blood pressure, pulse and stuck a thermometer into my ear. I settled back onto the bed and within the hour two cheerful ladies came in, helped me to an armchair and proceeded to change the bed linen.

At exactly twelve o’clock lunch was served along with two pills and an hour later the tray was taken away. It was one o’clock and since the anaesthetic was still coursing through my veins I clambered very carefully back into bed to avoid cutting off the blood flow to my legs or strangling myself in the cluster of tubes. At three o’clock my lengthy siesta was interrupted by the tea lady and at four o’clock, a nurse again measured my blood pressure, stuck the thermometer in my ear and fed me a couple of pills. She then marched me up and down the corridor for all and sundry to see my bare blushing buttocks through my open-backed gown.

At six o’clock dinner was served and by seven o’clock I was ready for a peaceful night’s sleep but those timely rituals started all over again at ten o’clock with metronomic precision until five days later when the last of the tubes were removed and I was free to use my wristwatch again. Needless to say the medical surroundings reminded me of the story about an elderly man who walked into a crowded doctor’s surgery. The receptionist asked the reason for his visit and he replied rather loudly, “I have a problem with my penis.”

”You mustn’t say things like that out loud.” she whispered, “you’ll embarrass the other patients. You should say you have a problem with your ear and then discuss it with the doctor in private.” The old man walked out and re-entered a few minutes later.

The receptionist smiled said, “Can I help you sir?”

“There’s something wrong with my ear,” he said quite boldly.

Nodding her approval that he had followed her advice, she said, “And what is wrong with your ear, Sir?”