One of the world’s great bargains is the Star Ferry in Hong Kong. For 30 Swiss centimes (HK$ 2.50) you can take the ferry from Wan Chai to Kowloon, or vice versa, and if you make the trip at night enjoy a spectacularly colourful skyline.

I used to take it regularly when I attended the HKTDC Watch & Clock Fair, happily paying my fare until one day I was alerted to the small notice at the ticket counter stating it was free for people over 65 years of age. Initially I refused to admit to myself that I was an old age pensioner, but one day, late for the ferry, I simply jogged through the gate, nodded to the controller and enjoyed one of the world’s best freebies. From that moment on …

Down here in Menton with its own impressive panorama, there’s another bargain to be had: a fourteen-seater Zest bus that runs from the Pont St. Louis, which is literally on the border of France and Italy, to Monaco, a 9 kilometre trip along the scenic coast road for the bargain price of 1.50 euros (1.60 Swiss francs). A less spectacular but more fascinating Zest trip is from the covered market in the centre of town to where I live via a narrow, hilly and tortuous winding route that is offered for a mere 1.10 euros. The trip to Monaco is a delight, but the trip home is both entertaining and informative since the regular passengers openly discuss what’s happening in town and reveal intimate details of each other which you cannot avoid overhearing. 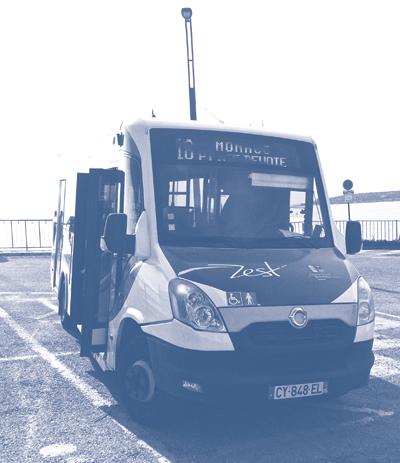 Last Saturday I was the only male passenger on the bus, surrounded by a dozen elderly good-humoured ladies who embrace each other as they get on and off the bus. They laughed and moaned about everything from the price of vegetables, their pensions, the politics of President Hollande and their ailments. However, the real fun started when the first two ladies descended halfway up the hill and the wagging tongues revealed that they lived together and, with a nudge, nod and a wink, whispered that they were in a ‘relationship’. A couple of minutes later, a lady with two vast shopping bags filled with everything from baguettes to highly pungent onions rang the bell for the driver to stop and left to a chorus of au revoir and à bientôt. Once the bus was on its way again the lady’s medical history was discussed in semi-whispered terms, “you know she’s had her ‘machin’ removed and now she’s going to have her varicose veins seen to.”

At this point the driver, a friendly and jovial Italian, burst into song and as all the ladies quickly joined in the bus sounded more like pensioners in a charabanc on a day’s outing as we zig-zagged along the mimosa and fig tree lined road to the next stop, the cemetery.

At the Cimetière du Vieux-château all but yours truly left the bus. It’s very popular with locals and tourists alike since there is a magnificent view of the bay of Menton and the old town with the eye-catching baroque Saint-Michel Archange Basilica. It hosts numerous white Russians and local dignitaries, but the most eminent of its residents is the Reverend William Webb Ellis, an Anglican clergyman and the presumed originator of rugby football. There’s even a statue of Webb Ellis as a schoolboy holding a rugby ball that was unveiled in 2006 to commemorate the 200th anniversary of his birth.

Alone at last, the driver continued his recital regaling me with a highly animated version of O sole mio, the first lyrics of which are Che bella cosa è na jurnata ’e sole - What a beautiful thing is a sunny day - and all for 1.10 euros. For those of you who stockpile trivia, Zest is a part of CarPostal France which is a subsidiary of the Suisse CarPostal company.

Moved by the man’s distress, he went over, apologised for the intrusion and asked if it was his wife or his child who had passed away.

The mourner looked up with tears streaming down his face and said, “No, it was my wife’s first husband.”