This year marks the 400th anniversary of the death of the ‘Bard of Avon’, that man of many words, mostly meaningful, William Shakespeare. 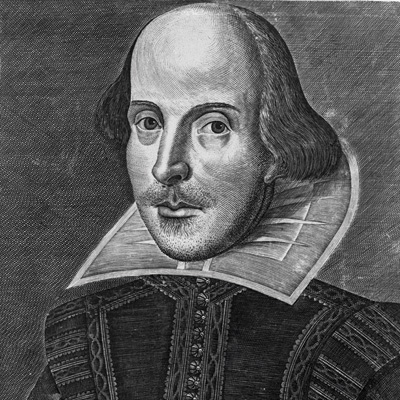 “I would challenge you to a battle of wits, but I see you are unarmed.” – William Shakespeare

Shakespeare scholars know that Shakespeare was baptised on April 26, 1564 and although his date of birth is nowhere to be found, it is conveniently assumed to be three days before that date, thus having him being born on April 23 of that year and dying on April 23, 1616.

Ben Jonson (who is considered by many to be the second most important English dramatist, was not only a contemporary of the Bard, but also it’s rumoured that he was a drinking buddy of Will’s and with him when he contracted the fever which purportedly killed him) wrote that Shakespeare was ‘not of an age, but for all time.’

And how true that is. Here we are four hundred years later still talking about him and his enormous output and unwittingly still using his prose. He was the first to use a heart of gold, set your teeth on edge, wear you heart on your sleeve, break the ice, too much of a good thing, a wild goose chase, vanish into thin air, make your hair stand on end and he’s seen better days, all Will’s words still in daily use.

Not of an age, but for all time, not only time as in immemorial but time as in the passing of it, appears regularly throughout his monumental works. Here is an apt one for the watch industry from Henry IV, Part 1: ‘Unless hours were cups of sack, and minutes capons, and clocks the tongues of bawds, and dials the signs of leapinghouses, and the blessed sun himself a fair hot wench in flame-colour’d taffeta, I see no reason why thou shouldst be so superfluous to demand the time of day.’ And later, in the same play we have: ‘O God! methinks it were a happy life, To be no better than a homely swain; To sit upon a hill, as I do now, To carve out dials, quaintly, point by point, Thereby to see the minutes how they run, How many hours bring about the day; How many days will finish up the year; How many years mortal man may live.’ Like his style or not, Will knew how to string words together to create poetic and philosophical images. From Othello we have ‘There are many events in the womb of time which will be delivered.’ Macbeth gave us ‘If you can look into the seeds of time, And say which grain will grow and which will not, Speak then to me … and ‘Come what come may, Time and the hour runs through the roughest day.’And in preparation of the bucket list we have: ‘The end crowns all, And that old common arbitrator, Time, Will one day end it’ from Troilus and Cressida. And as the end was near, Richard II mumbled ‘I wasted time, and now doth time waste me.’

So endeth my tribute to the Bard’s anniversary and I hope I haven’t wasted your time, but despair thee not, for yea, I be reminded of the tale of a boy who was walking down the street with his mother when suddenly he shouts out excitedly, “Mother, look there’s a bowlegged man!” His mother told him to be quiet, explaining that it was impolite to make remarks about people with an infirmity. The next day they crossed the man’s path a second time and the boy said, “Look mother, there’s that bowlegged man again!”

The mother scolded the boy and told him he would be punished for being so rude. At home, she gave her son a play by William Shakespeare saying, “Go to your room and read this and don’t come out until you’ve finished it.”

Three days later walking down the street the pair saw the bowlegged man again. This time the boy proclaims, “Hark! What manner of men are these, who weareth their legs as parentheses?”