Russia has seen a few revolutions in its time – not least Lenin’s October Revolution and Mikhail Gorbachev's program of economic, political, and social restructuring – lovingly known as perestroika - which dismantled the 75 years of the Marxist-Leninist-Stalinist totalitarian state.Today, Russia is enjoying another revolution – one of structured evolution. 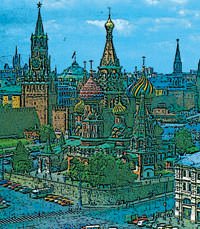 Russia has seen a few revolutions in its time – not least Lenin’s October Revolution and Mikhail Gorbachev's program of economic, political, and social restructuring – lovingly known as perestroika - which dismantled the 75 years of the Marxist-Leninist-Stalinist totalitarian state.Today, Russia is enjoying another revolution – one of structured evolution.

Russia is big! It is the world’s largest country in terms of surface, covering just over 17 million square kilometres (16.9 million square kilometres of land and 79.4 thousand square kilometres of water), an area that corresponds to around 1.8 times the size of the United States. Spread over this enormous landmass that stretches from Rostov in the west to Vladivostok in the east and Irkutsk in the south to Providentya in the north it has a population of 144,526,278 (July 2003 estimate), 89 million of whom comprise the labour force (22.7% in industry, 12.3% in agriculture and 65% in the service industries). The most populated areas of Russia are the cities of Moscow and its suburbs with 16,984,800 people and Saint Petersburg and its region with a population of 6,340,500.
In terms of natural resources, Russia is estimated to have one third of the world’s gas and coal supplies, vast timber and mineral deposits (which include gold, diamonds and 28% of the world’s iron ore deposits) and the country’s oilmen claim Russia has 13% of the world’s oil reserves, making them second only to Saudia Arabia. However, the problems of climate, terrain and distance remain major obstacles in the exploitation of many of the country’s natural resources. On the industrial side, in addition to the oil, coal, gas, chemicals and metal industries, Russia is active in all aspects of machine manufacturing, aeronautics, shipbuilding, road and rail transportation, communications equipment, agriculture, electric power generating and transmitting equipment, textiles, foodstuffs and consumer durables.
Today, Russia’s communications systems are flourishing. Having undergone important changes since 1991, the country has made, and continues to make progress in creating the infrastructure necessary for a more market-oriented economy. For example, there are now more than 1,000 licensed companies offering communications services with improved digital lines in urban centres and there has been a huge improvement in Internet and e-mail services. Estimates suggest that in addition to the 30 to 40 million main lines, there are more than 20 million mobile phones in use. Internationally, Russia is connected by undersea fibre optic cables, and has satellite earth stations providing access to Intelsat, Intersputnik, Eutelsat, Inmarsat and Orbita systems.


Population drops in Russia (Dateline 29. 1. 2004)
The population dropped 0.5 percent in Russia in 2003 compared with the previous year, according to a report by the State Statistics Committee of Russia. As of December 1, 2003, the number of Russia’s population was 144.2 million people.
The decline was due to a natural decrease in population and a decline in the inflow of migrants, offsetting the loss of population by only 4.1 percent.
According to the State Statistics Committee, the inflow of migrants into Russia more than halved in January-November compared with the same period last year. At the same time, the number of people who emigrated from Russia in January-November 2003 exceeded the number of immigrants to Russia over the same period by 36,094 people. 120,919 people came to Russia in January-November 2003, and 87,818 people left the country.
The State Statistics Committee reported that 2,260,500 people had died in Russia last year. 300,100 people died as a result of accidents, poisoning and injuries, which is 0.5 percent less than a year earlier. Of those, 47,900 people committed suicide (3.9 percent less than in 2002), and 83,800 people were crime victims (1.6 percent less than in 2002). 39,300 people died in road accidents (0.8 percent more than in the previous year), and 37,100 people died as a result of alcohol poisoning (0.8 percent more than in 2002).