Wyler Vetta, the pride of the Binda Group


The Binda Group, both a distributor and owner of various brands, is one of the historic leaders in the Italian market. Worthy of mention for its successful marketing campaigns, especially those of the very effective Breil ads, the group is moving into the international arena. Its goal is to reposition itself by presenting a high quality brand, of Swiss origin for which it has played a part since its beginnings - Wyler Vetta.

Wyler Vetta, the pride of the Binda Group 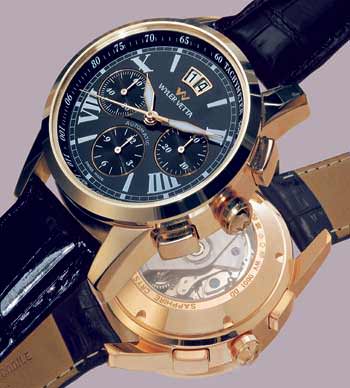 The Binda Group, both a distributor and owner of various brands, is one of the historic leaders in the Italian market. Worthy of mention for its successful marketing campaigns, especially those of the very effective Breil ads, the group is moving into the international arena. Its goal is to reposition itself by presenting a high quality brand, of Swiss origin for which it has played a part since its beginnings - Wyler Vetta.

With its brands Wyler Vetta, Breil, Tribe, and D&G Dolce Gabbana Time, as well as the distribution in Italy for Nike Timing, Seiko and Lorus, the Binda group sold 3.092 million watches in 2003 (+44% compared to 2002) for a total turnover of 190 million euros, representing a growth of 35%. Decidedly, it has been a good year for Binda, although others might qualify 2003 as a ‘disaster’. In fact, despite the general decrease in consumer spending, Binda saw a 29% increase in its traditional distribution, of which Wyler Vetta played a prominent role.
Italy experiences a real rediscovery of the historic brand of Wyler Vetta, which was re-introduced onto the Peninsula in 2002, and is present today in 300 very carefully selected retail stores. According to recent studies, Wyler Vetta enjoys a brand awareness of 70%, as a result of Binda’s ‘rediscovery’ of the exceptional watchmaker Paul Wyler, and its positioning of the brand in the haut de gamme segment of the market. The brand’s communication emphasized its rich history in Italy, and even in the world during a certain period. Over time, Binda’s goal is to have the brand clearly accepted as the embodiment of haute horlogerie in Italy and beyond.

A rich and wonderful history
The remarkable man behind Wyler Vetta was Paul Wyler. Born in Basel, Wyler was a pioneer since 1896 in the development of the balance. His aim was to improve its reliability and sturdiness and make his timekeepers available to a greater number of consumers. After two decades of work, in 1927, he patented his ‘Incaflex’ invention. Already in 1924, he had founded his brand with his brother Alfred. The word Incaflex would soon become famous in the watch world. It involved a balance made from a single piece of metal, thus making it strong, while its resistance to shocks was guaranteed by two half-spiral symmetrical arms that were reversed and that were joined at the centre of the circumference of the balance. This gave surprising flexibility to the balance, and a large degree of shock absorption.
Paul Wyler did not stop with this remarkable device. He would go on to receive nine more patents for balances with flexible arms, watch cases made in two or three pieces, innovations in materials, a pressure automatism principle, and advances in water-resistance.

The meeting of two worlds
During Wyler’s years of study and development, a meeting with a man from Italy would prove decisive. Lucio Binda was an Italian distributor who created his own business in 1906. He formed a relationship with Wyler to create the brand Wyler Vetta for the Italian market. Its resulting success in the Bel Paese was nothing short of remarkable. Binda was a true genius when it came to advertising and could be called a precursor of modern marketing. He ‘invented’ the testimonial in 1934, when he put Wyler Vetta watches on the entire national Italian soccer team. In 1956, as another remarkable publicity feat, he had a Wyler Vetta timepiece thrown from the top of the Eiffel Tower and had a neutral third party certify that it still worked! The same performance was repeated in Atlanta. Already beginning in 1953, the brand had its commercials on television – the first for a watch. The reputation of the brand and its sturdiness became legendary.
In 1993, after a difficult period during which the brand vacillated between the names ‘Vetta’, ‘Wyler Vetta’ and simply ‘Wyler’, Binda purchased the entire brand, giving it the name Wyler Vetta. Then, in 2002, Binda began its grand re-launch and repositioning of this mythical name.

The current concept
Following the success of the re-introduction in Italy, Binda is now promoting the brand on an international scale. The underlying concept is simple and direct. It is based on its watchmaking experience, the strength of its tradition and the importance it places on the movement, which management calls ‘Interior Power’.
Faithful to the original spirit of Paul Wyler, Binda also intends to offer its products at the best price/quality ratio possible. The brand is targeting a particular kind of clientele. “Our customers are the opposite of ‘fashion victims’,” explains Guendalina Crocco, who is in charge of the brand’s communication." Wyler Vetta is not a brand that speaks on your behalf. It addresses, with its classicism and relative discretion, a cultivated clientele who are above trends. Our primary customers are men between 30 and 45, as well as certain women who are not enslaved by the dictates of fashion. In Italy, our communication is very targeted, often tied, for example, to thematic television channels and cultural programs.”

The collections
New designs (entrusted to the Swiss designer Rodolphe), new movements, new materials…Wyler Vetta is counting on its affirmed design choices and production to make its entrance into the prestigious club of the grand watch brands.
The collections comprise a series of automatic movements, whose sturdiness and reliability are proven, as well as complicated chronographs, some of which are equipped with an exclusive in-house calibre. The cases have a refined look, somewhat ‘vintage’ in nature, and are inspired by the historical classic lines of the past. Their careful finishing is very Italian in terms of detail and design. The materials are first rate: steel cases or in yellow, white or rose gold; sapphire crystal, mother-of-pearl dials, screw-in case backs, alligator bracelets, personalized safety clasps.
The flagship collection is 'Espacité’, whose emblematic model is a very handsome automatic chronograph with large date and exclusive Wyler Vetta 8150 movement. The details have been carefully attended to such as the use of blued screws, decorated surfaces, rubies placed in specifically made settings – all of which can be seen along with the movement through the transparent sapphire crystal case back on the rose gold case. At ¤4,200, it has a remarkable price/quality ratio. It also comes with a steel case and ETA 7750 movement with a price tag of ¤1050, or as a simple automatic watch, in steel, with large date for ¤1650.
The second most important collection in the Wyler Vetta range is 'Beaux Arts’. It is a re-interpretation of a Wyler Vetta grand classic from the 1950s, the famous 'Dynastar’ that was immensely successful at that time. Comprised of chronographs and watches with lunar phases and perpetual calendars, the Beaux Arts collection has somewhat of a retro charm, with its curved lines, sapphire crystal, and dial with diamond, appliqué and luminescent indexes.
Besides these two central collections, Wyler Vetta proposes two other collections that are more entry level. One is a delicate and curved tonneau. Others include a few feminine pieces and ‘Valency’, which has been endowed with a very Latin design. In addition to its normal collections, a limited series will be presented at Basel 2004, where the brand hopes its new timepieces will help it conquer new markets.