Out of the blue … came blu

Out of the blue … came blu 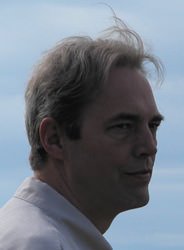 Born in Kornwestheim, a small town near Stuttgart in 1958, Bernhard Lederer “… was more interested in how a watch is made to tick than in how a Latin verb was conjugated.” Being endowed with nimble hands and an inquisitive nature, but knowing nothing about either watches or clocks, Bernhard took apart and repaired his first clock when he was fifteen years old. A year later he inherited two pocket watches from his parents’ family and suddenly the watch bug bit him. 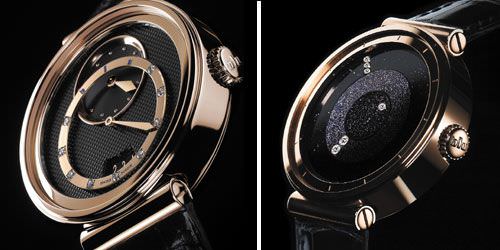 Golden blu – GALAXY
18 carat red gold case (39 mm) with gold logo engraved into the side, equipped with a Swiss automatic movement with an original winding device displaying the brand’s logo (called the blu-Orbit). Three concentrically placed rotating discs are decorated with sparkling aventurine. Each disc revolves at a different speed to indicate the hours, minutes and seconds by the position of the Top Wesselton diamonds set into to them. Sapphire crystals front and back, padded alligator leather strap with gold buckle, water-resistant to 30 metres.


A brief history
Initially the local library was Lederer’s source of information. He copied drawings by people like Graham and Berthoud to better understand the basics of watchmaking, but his fascination with the art soon saw him working as one of three apprentices alongside six watchmakers in the watch and clock restoration department of the Abeler Museum in Wuppertal. Since the restoration work was usually on historical timepieces and many parts were either missing or beyond repair, Lederer taught himself how to manufacture components which stood him in good stead when he set out on his own three years later, specializing in the restoration and reconstruction of vintage watches and clocks for auction houses and museums.
In 1985, Lederer began making his own watches but it was also around this time that one of his clients asked him to check out a clock at an auction to see if it was worth the asking price. Having seen the clock, Lederer immediately suggested to him that for the same amount of money he was willing to pay for the clock on auction he would make him one with more complications. The client accepted and so began a period when clocks were his passion, a period during which he created precision mechanical clocks and began to express his freestyle thinking on the passing of time.
Lederer’s clocks were built around the beauty of its mechanism and one of his finest pieces, The Perpetual, includes the moon’s phase and position controlled by just four wheels and will only become out of date in a few centuries from now – a feature making it far more exact than the renowned astronomic clock in the Strasbourg cathedral.

Bump … and so to watches
Bernhard Lederer’s changeover from clocks to watches began in 1993 whilst he was preparing for the Basel Fair. A member of the AHCI since its founding in 1985, he was to exhibit his clocks on the Association’s stand, but en route the car he was driving was hit from behind and his entire collection of clocks that he taken with him for the show was demolished. Insured, he anticipated full compensation, but the insurance people, as is their wont, decided to offer him only 60% of the value, suggesting that if he challenged the offer, not only would it drag out in court for anywhere up to ten years, but he would also have to pay costs. Disgusted, Bernhard sold all his equipment and abandoned his horological work to go into a period of doubt and contemplation.
Later that year, Hans Donner, the world-renowned artist and designer, had an idea for a wristwatch but was unable find anyone to create it. Hearing about Lederer because of a graphic watch that had been made by him for a blind man, he took up contact and the resulting collaboration was the now famous Time Dimension watch. This collaboration was followed later on by twenty-six monumental countdown clocks that were placed throughout Brazil, where Hans Donner now lives and works, to commemorate the 500th anniversary of the country. 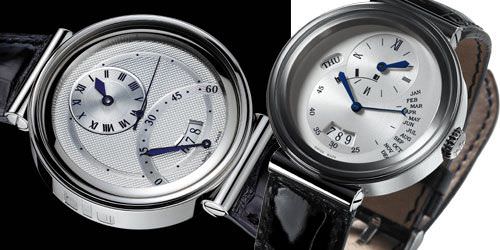 
Out of the blue …
In the year 2000, the blu company was formed, or to give the brand its complete name – blu – source du temps – and from day one, Bernhard Lederer, the brand’s Technical Director, was involved in all aspects of the company’s creative work as well as its production of wristwatches. The first prototypes and watch concepts were presented at Basel in 2001 and anyone visiting the blu stand was asked for their comments. From these, along with some additional ideas and innovative mechanical movements, Lederer created the first blu collection for the following year’s show.
“We had some orders during that show around 120 pieces,” Lederer explains, “however, the good distributors stood back to observe whether the brand would continue or not. In 2003, the orders increased and at this year’s BaselWorld the real orders began to appear. blu now has outlets in the USA, the Middle East, Hong Kong, Taiwan, Japan, Russia, Portugal, Switzerland, the Netherlands and Italy.”
“We will produce around 800 watches this year,” Bernhard Lederer continues. “We want to remain very exclusive since our watches have to be sold in the right outlets. We are looking for people who understand the products and what we are trying to do – people we can work with, which is why we have already refused quite a few possible retailers and distributors.” 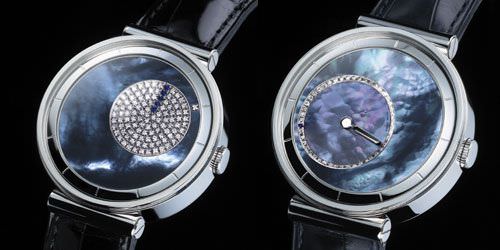 blu – MOONLIGHT
Stainless steel case (39 mm) with logo engraved into the side, equipped with a Swiss automatic movement with an additional device created by blu – source du temps to revolve around the entire dial. Pastel black mother-of-pearl dial that turns on an axis every twelve hours. An off-centre disc set with 78 Top Wesselton diamonds indicates the minutes by the position of a line of six blue sapphires. Côtes de Genève decoration and rotating blu logo visible through a sapphire crystal caseback, padded leather strap, with diamond-set buckle. Water-resistant to 30 metres.

LADY blu – ATOLL
Stainless steel case (35 mm) with logo engraved into the side, equipped with a Swiss automatic ETA 2892 movement with an additional device created by blu – source du temps to revolve around the entire dial. Pastel blue mother-of-pearl dial that turns on an axis every twelve hours. The outer edge of the subsidiary minute dial is set with 36 Top Wesselton diamonds and a sapphire marks the hour. Anti-reflective sapphire crystal, padded leather strap, with diamond-set buckle. Water-resistant to 30 metres


On expressing time
“I create watches that are completely different,” Lederer confides. “I learned to listen to people within the industry and then I created a strategy. I had the luxury of being able to develop something original and I now know that we have chosen the right direction.
“I’ve been in this business for twenty-five years and I am able to create unusual timepieces, but I no longer have to prove anything to anyone. I can create something that I want to create because I don’t like watches and clocks in the traditional sense. I feel that chronographs, for example, tell you that you have wasted your time. The hands are like knives on a cake, they cut out a piece of time and then take it away.
“Time is something emotional, it is something to be enjoyed and not destroyed by hands fighting to show something or other. What I try to do is show just how beautiful it is to have time and how beautiful time can be. Today, time is everywhere we look, it’s on computer screens, mobile telephones, dashboards in our cars, so it’s no longer imperative to carry a watch to know the exact time. All the current lust for the precise time has destroyed the emotional aspects of time itself, although a watch’s precision is still important since it is the ultimate characteristic of a quality watch. However, the symbiosis between technology and design is very important in our timepieces. One does not preclude the other, but it is imperative that these two aspects work in harmony, which is very demanding on our design and technology departments.”

THE STARS OF THE NIGHT
Models blu – Pisces (left) & blu – Scorpius (right)
18 carat white gold cases (39 mm) with logo engraved into the side, equipped with a mechanical automatic movement with Côtes de Genève decoration, Limited Edition number and constellation name engraved on the rotor. The brand’s logo is also integrated onto the rotor. Both dials are in black mother-of-pearl on two levels. The hours are indicated by a single sapphire set on the highly polished flange of the subsidiary minute dial and the dial depicts the astral constellations in diamonds and fine rhodium-plated lines, of Pisces and Scorpio. Sapphire crystals front and back, alligator leather strap, water-resistant to 30 metres.


Philosophy and aestheticism
“blu watches are surprising and fascinating because they do more than simply keep the time, they remind people that their time is their own, yet despite all the philosophical and aesthetic implications, they remain an instrument that displays the precise time,” Lederer reveals. “But time is pure emotion, it’s not something that is displayed on the dial of a watch. Time passes as quickly or slowly as the mood of the person wearing the watch and our goal is to give some of time’s beauty back to the public.
“Our watches are innovative – both technically and aesthetically. The movements are the equivalent of a chronometer – except they cannot have the certificate since I don’t show seconds on my watches. But that is not what the wearer of our watches looks for. They are searching for a feeling for time, something more than simply knowing what time it is. They understand the difference between showing the time and interpreting the time. No other watch manufacturer produces anything that resembles our timepieces. They are unique.”
Bernard Lederer concluded by offering an anecdote.
“A man came to our booth at BaselWorld and told me that because he now has a blu watch he can go shopping with his wife. He explained that before he had the watch he would arrange to meet his wife at a certain time and she was always late – five minutes, a quarter of an hour, half an hour – and he used to get very annoyed hanging around for her. Now he arranges to meet her and simply sits and looks at his watch expressing time in a different manner. Lateness was suddenly of no relevance as he enjoyed watching the changing aspects of the dial.”

The art of being different
The originality of ‘blu – source du temps’ is the brand’s perfect blend of mechanical innovation with a unique visual concept of time. The watches are all about the importance of taking or making the time to understand time. Their raison d’être is not solely to appreciate the beauty of the timepieces or their precision, but to develop a feeling that time can be perceived on another level. ‘blu – source du temps’ is a whole new concept, an intriguing horological philosophy of the appreciation of man’s time.