First, an historical snapshot. In the year 1879, the value of exports from the United Kingdom and Northern Ireland (hereafter abbreviated to ‘UK’) of watches, clocks and parts amounted to low millions of pounds (in the currency terms of 2004). The value of UK-manufactured and VAT-registered goods in 2003 was… nil! This is simply because we no longer make watches, clocks and parts. We just import and assemble them, and thereafter export some. In 2001 there were 105 VAT-registered companies here ‘manufacturing’ watches and clocks. In September 2004 there were 86 left, of which none at all makes every component. Our designs and innovative features produced an export figure in 2003 of about £35 million – but this is meaningless in terms of Swiss statistics. Obviously I generalize a little, because there are a few single watchmakers, the most famous of them being George Daniels, and some manufacturers of straps, bracelets, etc., but they are however mainly for domestic consumption. In 1883, the Goldsmiths’ Hall in London (described later in this report), in its then Assay Office, hallmarked 104,000 silver watchcases, thus verified for sale. By 1900 the figure was down to 5,146. Last year there would have been fewer than 100 UK-made silver watchcases hallmarked in the UK. A further historical note: during the period January–August 2004, the UK imported from Switzerland 578,432 watches to the value of 317.4 million Swiss francs and is Switzerland’s seventh largest market (FH statistics).

Mallory in Bath in 1864 and to-day’s interior


This is all very sad, because Greenwich Mean Time was in use in the UK in 1848, was established by law here in 1880, and was ratified in the USA in 1884 at the famous International Meridian Conference, which resulted in the world being divided into 24 time zones. This was based on the meridian, from which longitude was and is reckoned, and it passes through the Royal Greenwich Observatory, on the edge of London (0 degrees). This was at a time when the UK horological trade employed 22,485 males and 1,363 females, according to a government census.
So what is left of our trade today are imports, distribution, retailing, and selling techniques of all kinds. And these are the areas upon which this Focus takes a look. One piece of advice to readers: in the UK we visit a ‘jeweller’ to buy a watch! It has always been like that. 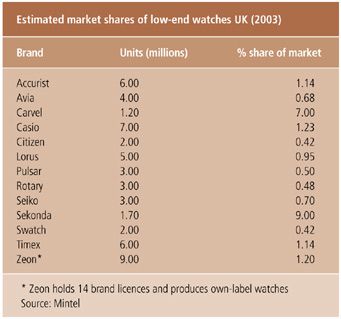