We’ve all seen it… the race to create very haut de gamme mechanical products that has been agitating the Swiss watch industry for the last few years. This race has also resulted in all sorts of alliances, under various forms – mainly buyouts, mergers, or partnerships – all with the primary objective of developing a particular type of product or collection. But, in this context, we really were not expecting a brand such as Timex, which specializes in mass production, to leap into the fray for this very coveted niche.

We’ve all seen it… the race to create very haut de gamme mechanical products that has been agitating the Swiss watch industry for the last few years. This race has also resulted in all sorts of alliances, under various forms – mainly buyouts, mergers, or partnerships – all with the primary objective of developing a particular type of product or collection. But, in this context, we really were not expecting a brand such as Timex, which specializes in mass production, to leap into the fray for this very coveted niche. 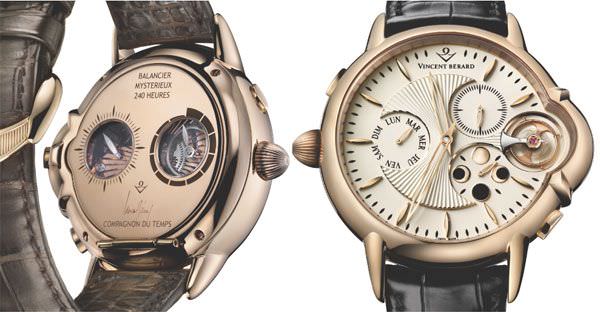 But if we were not expecting this, it means that we were ignoring the fact that Timex has been progressively transformed into a veritable watch group, whose ambitions are, according to the words of Joe Santana, its President and CEO, “to address the needs of all consumers, not only those with the most modest means but also the super rich.” To this end, Timex has moved into the luxury fashion watch sector, with its acquisitions of Valentino and Versace. And, with its recent purchase of Vincent Bérard, the brand is taking an additional step into the domain of very creative mechanical haute horlogerie.

Creative independence
For Herbert Gautschi, the new CEO of Vincent Bérard SA, who has overseen this operation, Timex “offers the guarantee of long-term development, supported by investments that have already been planned and correspond to progressive and well-defined phases.” Timex is a family company, whose sole owner is Fred Olsen, a Norwegian shipping magnate.( As an interesting aside, Olsen’s other claim to fame is that he served as one of the models for the Charles M. Burns character in the hit television series, The Simpsons.)
Sitting next to Gautschi, in the Jura farm where the brand has its ateliers, Vincent Bérard concurs with his statement about long-term development. “This arrangement is beneficial because it provides me with the necessary framework within which I can continue to progress in my work in total creative autonomy,” he explains. “There is also no risk of cannibalization within the Timex group because what we do and how we do it are unique, and will remain so.”

Noticed in 2005
It was in BaselWorld, in 2005, at the stand of the Horological Academy of Independent Creators, that Vincent Bérard first attracted a lot of attention. Of French origin, this watchmaker is a true artist at heart, who also has had his own atelier in La Chaux-de-Fonds since 1992. At the 2005 BaselWorld, he presented a remarkable and unique piece, a variation of the ‘Spring’ model of the four carriage timekeepers that he proposed to make under the common name of the ‘Four Seasons’. Noteworthy by its unusual size, its original movement, and its quite exceptional decoration, this piece was also supposed to be the prelude to another development: a collection of wristwatches with the name ‘Spindle of the Infinite’.
Aware of the potential of this future collection, Vincent Bérard then set about finding the money and the complementary skills needed to bring it to fruition. The offer by Timex, guaranteeing him full and complete artistic independence, seemed to Bérard to be the best solution possible.


An exceptional movement
The first wristwatch, the Luvorène 1, was launched by Vincent Bérard SA at BaselWorld this past Spring during a delightful ‘ceremony’ organized in one of the city’s churches the night before the opening of the Swiss show (see also Europa Star Issue No. 3/2007 on this subject). The new timepiece wonderfully epitomizes the particular spirit that drives this watch creator. As he himself explains it, the idea “is not to change the industry from top to bottom, but rather to take inspiration from the greatest timekeeping traditions in order to give timekeeping a completely contemporary interpretation, using the technological tools that we have today.”

The second fundamental aspect of his approach is his belief in the notion of strict independence. Thus, the VB 441 movement that drives the Luvorène 1 is entirely designed and realized by Vincent Bérard, who explains that he “started from a blank page”. When opening the hinged case back, you discover a surprising movement, with a totally original architecture, one that was inspired by the so-called three-quarter-plate bridge on pillars such as the way the movements of the 17th century were designed. In Bérard’s very original piece are five successive bridges in the form of spindles, which are placed in successive steps to form a spiral. The use of pillars thus allows a clear view, from the sides, of the movement’s interior. Another remarkable detail is that the crown has been placed at 9 o’clock in order to leave space for a balance outside of the plate, situated in a protuberance of the case at 3 o’clock. This balance is labelled ‘mysterious’ because it is designed in such a way that only it is seen, as if moving in a void, with no apparent gear trains or other support (this particularity makes it nearly impossible to copy since the entire gearing system has been revisited).

A ‘tractor’ for the future
The VB 441 movement, with a power reserve of 10 days, lunar phases, and day of the week indication, was designed to become Vincent Bérard’s ‘tractor’. Using it as a base, the watchmaker will add a minute repeater or a perpetual calendar in the future. One advantage is that he can do this using the same case. In fact, during the architectural and functional design of his ‘tractor’, Bérard allowed for enough space to be able to modify the various functions, not by adding layers or additional plates as is the usual scenario, but rather by literally ‘digging’ into the interior of the movement.
Another advantage of this unique and lovely design is the solidity of the movement, a robustness that is strengthened even more by the architecture using pillars, as well as by the greater thickness of the bridges, gears, and even the screws. Bérard redesigned everything, from the gear wheels to the screws, whose heads are no longer a slot but drilled with three small key holes thus requiring a special tool to drive them in (an additional guarantee for after-sales service since it is impossible to dismantle the movement without this very specific tool).

The watchmaking of art
“My conception of watchmaking,” explains Vincent Bérard, “is what we could call ‘the watchmaking of art’. This means that the technique and the mechanics, which I want to be simple, solid, and functional, must yield to the artistic concept. It must be in the service of art, and not the opposite. The design of the movement thus answers in detail to this requirement.
“The form of the spindle determined the final structure of the bridges, and this form is found everywhere in the movement. It also dictates the appearance of the hands, the crown, etc. What’s more, in working with greater thicknesses for the bridges, as we said, but also for the dial, I have more freedom for decoration. Because it is thick, the gold dial can lend itself to all sorts of adornment. It can be black lacquered and set with diamonds, or it can be pavé set, painted, lacquered or set in other ways without us having to make major changes,” adds the artist.
From a decorative point of view, the Luvorène 1 has been splendidly finished, in the old ways, we could say. It has been decorated in a style that is completely out of the ordinary and, just like its movement; it surpasses the usual standards of excellence (Vincent Bérard says, in passing, that the famous Côtes de Genève is a watchmaking ‘cliché’). Its finishing resembles a sort of emotional scene that has been put into place by its creator. The very particular shape of the gold case radiates a sense of softness. The various executions of the dials make them shimmer, yet are very readable.
When the watch is turned over, we find the indications for the seconds and the power reserve through two small windows cut into the cover. By emphasizing this, in the same way a car’s hood is raised, one is awestruck by the beauty and originality of the ‘motor’ decorated with linear grooves that are identical to those on the dial. In passing, we must mention a small detail in regards to the crystal that protects the two small windows in the cover — it is made of two small loupes allowing the details in the movement to be admired from close up.

Production this autumn
Vincent Bérard and Herbert Gautschi are today doing a few small final adjustments to their Luvorène 1 before starting production in October. Positioned in the rather high price range of between CHF 70,000 and CHF 74,000 (justified because of its originality, finishing, and exclusivity), the Luvorène 1 is now in the market-entry phase.
In terms of distribution, Herbert Gautschi explains that, contrary to what we might imagine, the synergies with the Timex Group are far from being non-negligible. In the important Asian market, for example, distribution of Vincent Bérard watches will benefit from the group’s presence and its sales networks, reinforced by what Gautschi has created during his long tenure in the industry. Besides Asia, the main target markets of the young brand are Europe, Russia, and the Ukraine.

An evocative journey from Rome to Paris imagined by architect Peter Marino, experienced through the language of architecture, interior design and the (...)