A world first: under the brand name of Mermod Frères, the Swiss music box manufacturer, Reuge, is presenting a musical wristwatch. This has nothing to do with the ‘minute repeaters’ since there is no hammer striking a bell but rather disks that activate metal strips, just like in your grandmother’s old music box.

A world first: under the brand name of Mermod Frères, the Swiss music box manufacturer, Reuge, is presenting a musical wristwatch. This has nothing to do with the ‘minute repeaters’ since there is no hammer striking a bell but rather disks that activate metal strips, just like in your grandmother’s old music box.

It seems, contrary to accepted opinion, that the music box is enjoying renewed popularity. At least, this is what is maintained by Kurt Kupper, the new CEO of Reuge, a company founded in 1886 and the only remaining music box maker in Switzerland. The brand is also only one of three in the world. The two others are Chinese and Japanese, which manufacture for the low-end range of the sector, while Reuge offers products ranging from CHF 300 to CHF 120,000.
Testimony to this new found modernity is seen in the latest of Reuge’s music boxes, designed in the form of a V-shaped engine for…Ferrari!
“I want to open the curtains,” says Kupper, “and let the sunlight come in to awaken this Sleeping Beauty.” Along with the sunlight has come a number of initiatives: music boxes placed in Maybach automobiles; bell-boy hat-shaped music boxes offered to all the newlyweds at the Peninsula Hotel in Tokyo (the waiting list extends to the end of 2008); Harry Potter music boxes, including a ‘musical piece of furniture’ with an LCD screen and DVD player; and even music boxes for the BirdLife animal welfare foundation whose Honorary President is none other than Her Royal Highness Princess Takamado of Japan.


Renaissance of Mermod Frères
The latest initiatives is Reuge’s acquisition of another sleeping beauty, the watch company Mermod Frères, established in 1816 in Sainte-Croix, also the home of Reuge. At that time, Mermod Frères specialized in complicated watches as well as mechanical music boxes. The crash of 1929, however, put an end to their production.
After nearly 80 years, the company is being re-launched amid a lot of fanfare, if we can say it like that, with the presentation of a world first, the Primo 4. The fruit of four years of research, this new watch reflects the combination of two types of savoir-faire: watchmaking and the art of mechanical music.
A highly complex mechanism, the movement of the Primo 4 is composed of 577 elements. A veritable juke box for the wrist, it is mechanically programmed to play four different melodies, which are produced by four discs visible on the dial. These discs are fixed onto a complex support that is blue coloured steel. On their lower faces are small pins at designated locations. When the discs rotate, the pins raise the musical strips, or teeth, of the metallic comb that is underneath them, causing them to vibrate and play the note.
Activated by a pushbutton at 7 o’clock, this disc-support rotates in two steps. First, it positions the disc between 3 o’clock and 5 o’clock so that it is in the right place for starting the tune. This is where each disc displays its neutral zone, a specific area where there are no pins. Once in the correct position, the support then moves the disc to 6 o’clock, above the red arrow, and starts to rotate. The pins of the disc then come into contact with the strips of the comb, causing them to play the designated tune. Each melody lasts about 10 seconds.
We can easily imagine that such a mechanism would require a considerable amount of energy. The Primo 4, therefore, has two distinct barrels. One is for the watch movement, with the hour and minute indications, and the other is for the additional musical mechanism. The two barrels are wound using the crown, located traditionally at 3 o’clock. The musical mechanism is wound by turning the crown clockwise, while the watch movement is wound by turning it anticlockwise. To set the time, the pusher at 10 o’clock is pressed to release the crown. The tunes are played using a second pushbutton situated at 8 o’clock.
The quality of the sound transmission has been increased by a double case back, incorporating a system of very small vent holes, which serves as a sound amplifier and vibrator. The musical performance has also been enhanced with a sapphire crystal that has been specially developed to obtain optimal acoustical features, thanks notably to the contact points between the musical module and the crystal itself. 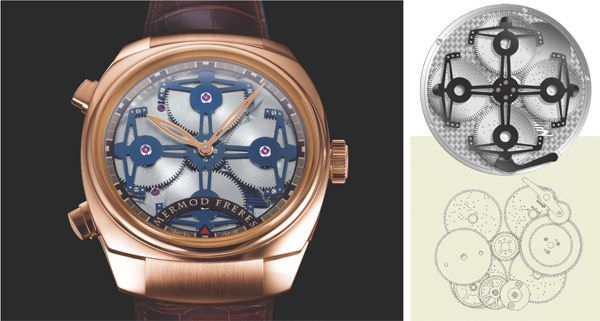 Prelude
From a design point of view, the Primo 4 draws inspiration from the shape of a pocket watch made by Mermod Frères. Its 45.5 mm case, available in rose, yellow, or white gold, is very elegant, but when the discs begin to rotate, it becomes nearly ‘magical’. The ensemble is extremely well finished in keeping with the purest criteria of the art of timekeeping.
The Primo 4, distributed in three limited-edition series of 50 pieces (each by colour), is the prelude to the creation of a complete collection of musical watches that will see the light of day over the next few years. In 2008, Mermod Frères envisions the launch of a Mono-Disc Watch, equipped with only one disc in the form of a dial that pivots on itself, followed by a ladies’ line, and even ‘musical jewels’. But, that is another story. The Sleeping Beauty is waking up to the sound of music… a box of music.