Favre-Leuba rises from the depths


The new team at the head of the historic brand, Favre-Leuba, intends to regain the immense esteem that the 290-year-old brand once enjoyed. In doing so, they have some strong arguments on their side.

Favre-Leuba rises from the depths

The new team at the head of the historic brand, Favre-Leuba, intends to regain the immense esteem that the 290-year-old brand once enjoyed. In doing so, they have some strong arguments on their side.

If ever there was a brand that, during its long and episodically glorious history, has suffered all sorts of ups and downs, even to the point of totally losing its identity, it is Favre-Leuba. But after 290 years (Abraham Favre established his atelier in 1718, and the brand, Favre, was born in 1737; the association Favre-Leuba was created by his grandson who joined forces with Auguste Leuba in 1814), Favre-Leuba is still around.
The brand is now trying to regain its health and prestige under the invigorating leadership of its new CEO, the young Clément Brunet-Moret, and his not less dashing Director of Communications, Frédéric Dumonal. These two men were chosen to head up the brand, now established in a very lovely mansion in the Basel area, by Favre-Leuba’s new Spanish owner. This group acquired the brand in 2003 from LVMH, which had itself purchased it from the Benedom group, which previously had acquired it from the defunct Saphir group. Saphir had originally bought the company in 1970 from the descendents of the family (the eighth generation) during the turbulent quartz era after the death of the last charismatic owner, Henry Favre. 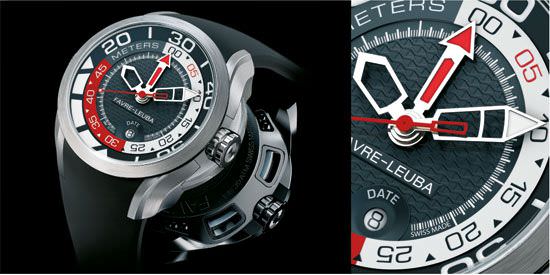 
A sporty, technical, and watchmaking DNA
The most glorious era for Favre-Leuba occurred after World War II. Its expansion was more than impressive (650,000 automatic watches per year) and its reputation and prestige spread around the world, notably because of pieces that were remarkable in their innovation such as the Bivouac Altimeter, introduced in 1969, and the mechanical depth metre, Bathy, launched in 1966.
It is essentially on these sporty, technical, and haut de gamme watches, still highly sought after by collectors, that the owners are basing their strategy for the relaunch of Favre-Leuba. They are betting on its “sporty and technical DNA,” incising it from the wanderings of the brand’s previous and rather low-end existence where it had no meaningful identity.
ClÉment Brunet-Moret intends therefore to wager “on the mechanical watchmaking of the 21st century,” by proposing pieces “whose objective is to go beyond the simple measure of time to offer new functions and innovations, but with a refinement in execution that connects these watches to the great traditions of timekeeping.” This approach, which he himself qualifies as “exclusive” and “niche market” (the stated goal is to gradually produce 2,000 pieces per year with a price range of 10,000 to 30,000 Swiss francs), found its first expression with the Mercury Collection in 2007.

Mercury Collection
The Mercury Collection is composed of a Chronograph in rose gold, a Big Date in rose gold, and a Power Reserve in steel, all with a large 44mm case and a dial with a multi-level construction. Superbly designed, with notably the perfect integration of its alligator or rubber straps, the Mercury line possesses a classic aura with a touch of high technology. The high-tech aspect is seen in the patented bi-directional crown locking system, which prevents any accidental manipulation and guarantees water resistance even when the external crown is pulled out.
The Chronograph and Big Date are also equipped with an integrated working reserve indicator—a bi-colour counter—which is coupled to the seconds hand. This function, according to its designers, “reflects the internal life and the vitality of the watch.” The finishing is impeccable, especially with its alternating brushed and polished metal. The watches are driven by Dubois Dépraz movements—special elements were designed especially for the brand—which are fully protected since everything screws in to the case.


Exclusive depth metre
This year at BaselWorld, the brand will present prototypes of the new Bathy V.2, indicating a return to its own traditions. The Bathy V.2 is equipped with the specific technology of the Favre-Leuba depth metre, which functions by means of pressure on a membrane whose composition still remains confidential. This particular product will be available in three models (with three different membranes) with depth metres for 45 metres, 150 metres, and 300 metres. It will feature an automatic movement, complex grade five titanium case, rotating bezel with large numbers, over-sized hands to facilitate readings under water and a rubber strap.