The great strength of Christophe Claret is to have succeeded, in 22 years of independent activity, in constructing a very high-end integrated production tool, worthy of the very sophisticated products that the company creates to the level of 90 per cent in-house. Of the 115 people who work there, some 40 are certified watchmakers who produce a very small number of watches—around 420 to 450 per year. The simplest and least expensive is CHF 35,000, while the most expensive reaches around CHF 120,000 (ex-factory price, so multiply that by four, five, six or even seven, depending on the brand!). Besides his undeniable talents as a watch designer, the power of Christophe Claret is that he excels as much in the design and production of his own movements as he does in the cases.
In 2000, the Christophe Claret manufacture, founded in 1989, set up shop in the Soleil d’Or, a beautiful house built at the beginning of the 20th century by the watchmaker, Urban Jurgensen, on the heights of Le Locle, just below the watch museum in Les Monts. Since 2000, the house has seen the addition of two ultramodern wings. In this compact setting is one of the most complete and performable manufactures, as well as one of the most modern and innovative. With this tool, Claret has been able to realize, in hardly a dozen years, 63 original in-house calibres, of which the simplest is a tourbillon. The day of our visit, the manufacture was working in parallel on 46 different calibres. A record, without a doubt.
All this obviously involves very rigorous coordination when we think of the operational flow that has to be managed, especially when all these pieces are produced in only ‘small series’—12,000 references on the list, or 12,000 operational ranges to develop, and more than 2 million pieces in production and in stock in the ‘Treasure Room’. It is here, in the computer-managed card file, where the finished pieces and the unfinished ones are contained, making up the kits—80 per cent will be distributed for assembly in-house and 20 per cent will be delivered as they are to the brands that ordered them.

Symbioses between movement and the case
One of the originalities of Claret is the way that the movement and the case are designed, constructed and produced together, in a close symbiotic relationship, if we might use these words. The research department dedicated to calibres, with its ten constructors, is next to the department dedicated to cases. Christian Cartier, head of the design and technical monitoring of the cases, explains that those “intended to receive very specific and complex movements are necessarily as sophisticated as the mechanism they harbour, protect and showcase. Like the construction of the calibres, the production of the cases is an exercise in innovation: articulated horns, lateral openings, articulated fold-over clasps…”
The Claret ‘style’ is completely evident. By developing his own manufacturing capabilities in the domain of the movement, Christophe Claret has given wings to his own type of watchmaking. He has thus been able to develop specific techniques such as the use of rollers like in the Shabaka, for example, developed for Jean Dunand (of which he is a partner with Thierry Oulevay), a watch that is particularly exemplary of this integration or this mutual pollination between the mechanism and the case.

For the love of machines
This development has also been made possible because Christophe Claret is nearly as fascinated by the movements he designs as he is by the machines he develops. A good example is the ‘monster’ that was recently created for the manufacture’s case department: a 17-axis CNC, capable of working in pairs with 2 x 5 axes, which allows not only the operational time to be divided in half, but also, by minimizing the manipulations and adjustments, to offer superlative tooling precision.
An additional example, not far away, in the ebauche department, another machine is the pride and joy of its owner: the Flashcut laser, developed by the manufacture in collaboration with BC-Technology. This machine cuts out 70 per cent of the component parts. In four hours, it does the work of five electro-erosion machines that would have to run for 24 hours. This gain in time and energy relegates the other machines to the status of ‘dinosaurs’. In the same workshop, is a Witech machine tool, used up to now only in automobile production, but that Christophe Claret had adapted for watchmaking. It has a system permitting the automatic replacement of 96 tools that it controls, or the auto-control of the pieces being produced allowing for automatic corrections. And, there are other top-secret machines, hidden behind doors that can only be opened with a digital recognition system, such as the mysterious machine capable of automatically polishing the curves of sapphire crystal. (Remember that it was Christophe Claret who was one of the pioneers in the use of sapphire.)
“I am always looking to maintain a very progressive vision of the modes of production,” explains Claret, “and to be as innovative in the domain of equipment as in that of watchmaking.” But this concern has other reasons. The mastery of the fabrication process, besides bringing an always welcome autonomy, allows for better reactivity by decreasing deadlines, allows for ‘real time’ research and innovation, and for these various factors, is economically determinant.
We cannot go into detail here about all the ateliers of this manufacture—of which the great specialty is the tourbillon—but, other than the assembly of movements that is obviously done in-house, the finishing, polishing and decorations also occupy a choice position: thermal treatments, tempering and then polishing after tempering, electroplating, the impressive chamfering atelier where no less than 15 people work to patiently hand-finish the component parts, and the decoration atelier where finishings such as Côtes de Genève and circular-graining, among others, are carried out. 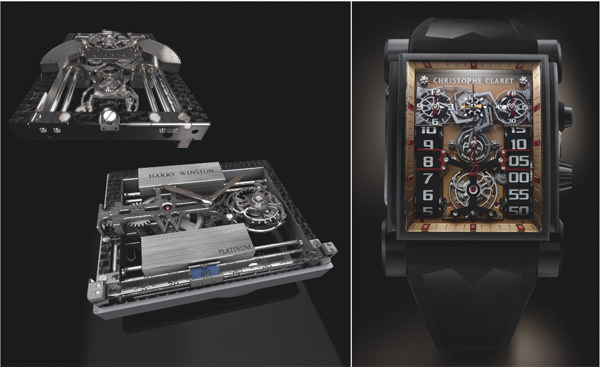 A style apart
In spite of the large diversity of timekeepers produced in the manufacture, we can say that the fascination Christophe Claret holds for the machines, the processes, the savoir-faire and the innovations is the same for the products he designs. Connecting rods, rollers, animations, chimes, mechanical ballets, all play a part in this. The mechanical is not hidden, on the contrary, it is showcased; it is discovered under the sapphire cases; it plays with volumes and depths.
In this regard, the Dual Tow, launched by Christophe Claret in 2009 to celebrate the 20th anniversary of his company, synthesizes and condenses, with its 568 components, the spirit of timekeeping according to Claret.
This single pusher planetary chronograph with chime is equipped with a tourbillon and belt-driven hour displays—no less!—and is a veritable wrist machine. A unique and totally original particularity, the Dual Tow’s chronograph functions thanks to three satellites or planets, linked to a column wheel that drives the operations via six levers and hammers in the shape of ‘legs’ that give the piece a gracious allure. It embodies all that is Christophe Claret in a mix of mechanical fascination, transparency and depth of movement, as well as original displays.