The first Patek Philippe watch with a regulator dial


The first Patek Philippe watch with a regulator dial

Patek Philippe recently presented a new timepiece, never before featured by the Geneva manufacture—a “regulator” type dial that also includes an annual calendar function.
The watch is driven by a new self-winding calibre, the 31-260 REG QA, an ultra-thin movement (33mm in diameter with a combined thickness of 5.08mm for the basic movement plus annual calendar) with a unidirectional micro-rotor offering a power reserve of 60 hours. 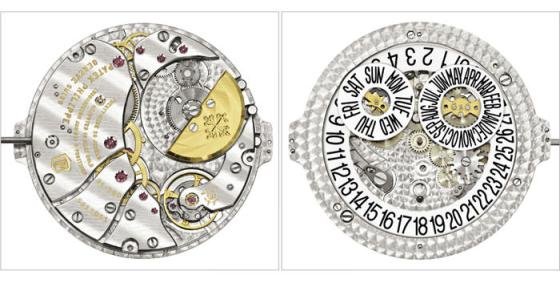 Designed for the new technology
This new calibre, directly inspired by the famous ultra-thin calibre 240, launched in 1977, was designed from the very beginning to accommodate a regulating organ made in Silinvar® with its Spiromax® balance spring and Pulsomax® escapement (with pallets and pallets wheel in Silinvar®).
In itself, the use of a Silinvar® regulating organ, developed specifically for Patek Philippe, is nothing new because, already in 2006, Patek Philippe revealed its first escapements made in this special alloy of silicon. (For more on the use of silicon, see the article, The Silicon Revolution on www.europastar.com).
Improved in isochronism and an increase in efficiency leading to an optimisation of the calibre’s operation and reliability are the main advantages of this technology. The planned integration of this technology into the new calibre has allowed Patek Philippe to optimise the profiles of the teeth on the gear train, from the barrel wheel to the pallets wheel. These new profiles ensure better meshing between the wheels and the pinions, a reduction in friction, and thus more efficient energy transmission.
Another notable point is that, using these technologies, Patek Philippe has been able to increase the frequency of the new movement to an unheard-of 23,040 vibrations per hour, or 3.2 Hz, which represents an increase in frequency of 10 per cent. According to the watchmakers at Patek Philippe, this higher frequency “makes it easier to adjust the precision to within the brand’s tolerances, which are -3 to +2 seconds over 24 hours”, in other words, a delta of 5. The COSC has established a delta of 10. (As an aside, Patek’s watchmakers are the only ones capable of calibrating their watches to this frequency since no commercial machine does it, further demonstrating the determination for self-control and self-certification behind the Patek Philippe Seal).
The increase in energy efficiency obtained by these various innovations has thus permitted Patek Philippe to utilise a less powerful and much longer mainspring, enabling them to raise the power reserve from 48 hours, in the previous calibre, to the current 60 hours (a gain of 25 per cent). A related advantage is that the torque curve of this extra long spring is much flatter all along the length of the disarming process, thus procuring a better stability in the amplitude.
So, it is on this new base that Patek Philippe has “grafted” a mechanism for an annual calendar, displayed in three windows (the day, month and date require only one single correction per year). Introduced in 1996, this “useful complication” is among the greatest commercial—and technical—successes of the Geneva manufacture. 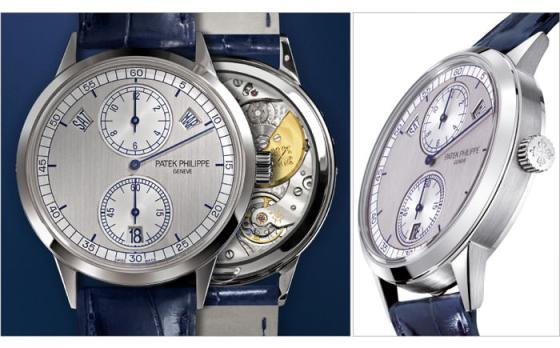 Timeless technical elegance
The annual calendar ideally complements the regulator-type display of the new timekeeper. We have become accustomed to seeing the three calendar windows located in an arc between 10 o’clock and 2 o’clock, but in this case, it was not possible to maintain this configuration. Here, the “regulator” display provides a central minute hand, hours at 12 o’clock, and seconds at 6 o’clock (in passing, this was not possible with the previous calibre 240 whose small seconds display was at 5 o’clock).
The day is placed at 10 o’clock, while the month is at 2 o’clock, and the date is seen in its window at 6 o’clock inside the seconds sub-dial (which some people might regret since, in a regulator, one should be able to continuously see the ticking of the seconds—but here there is no other option unless one forgoes the annual calendar).
All in the aim of high readability, working precision oblige, the general design of this watch evokes exemplary classicism. The white gold 40.5mm case, of the Calatrava type, traditionally constructed on three levels: the transparent case back, horizontally-satined middle case, and bevelled bezel with a flat profile, as well as the long bevelled horns, which confer upon the piece a grand and discreet elegance.
Standing out from the vertically-satined dark silver-grey dial are the snailed sub-dials, treated with a lighter grey, and the blue minute markers. Simple Arabic numerals, delicate indices, and blued baton hands all reinforce the elegantly technical nature of the watch.
Selling for CHF 44,000 and hardly out of the ateliers, this classic and precise new timepiece already seems like a classic of the Geneva brand.