Greubel Forsey at the foothills


Greubel Forsey at the foothills

A new GMT model will be the star of the SIHH 2012 for Greubel Forsey. It’s a model that signals a certain maturity of the brand’s unique tourbillon technologies, since it is the first time that one of these so-called “fundamental inventions” by the company has been associated with a complication.The invention in question is the 24-second inclined tourbillon, whose compact size is perfect for allowing complications to be added to the movement. The 25-degree inclination and the fast rotation of this tourbillon help to compensate for the effects of gravity on the movement and therefore offer improved isochronism. For Stephen Forsey, the GMT indication had to be something special. “We felt that there was very much a need for a timepiece which has world time, universal time, GMT possibilities and being able to have this temporal representation of the earth day and night,” he says. The result is a GMT display that includes a globe—visible both from above and through a sapphire window in the case middle—with a 24-hour day/night scale engraved on a sapphire ring around its equator. But the rear view is just as important as the dial side, since the wearer can use a large wheel divided into 24 time zones (each bearing the name of a city within that time zone) to set the “home time” on the globe using the GMT pusher at 10 o’clock. This practical scale even uses different colours for time zones that use daylight savings time.Once the time zone has been set for the globe, the same GMT pusher can be used to change time zones as the wearer travels. Pushing and holding the pusher locks the movement of the globe so that the primary time indication can be set. The wearer can then see at a glance on the globe—for anywhere on earth—both the time and whether it is day or night. 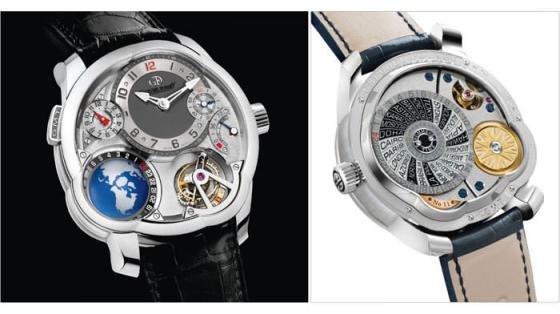 Aside from the revolutionary tourbillon movement and novel GMT display, the watch also shows a painstaking attention to detail in its decoration. Upholding the traditional decorating skills of 19th century English and French watchmakers is so important to the two founders of the company, in fact, that they have helped the canton of Neuchâtel set up a course for re-training that welcomes around 10 students each year. One of the fruits of this intensive decoration work is the relatively rare frosting finish on the base plate that is used in place of a dial. Not to be confused with shot-blasting, this decoration requires a fine touch using a metal brush with no room for error. Against this background, the elements screwed on to the base are also finished by hand using techniques such as graining, bevelling, polishing, lapping and flat black polishing.Greubel Forsey’s victory at this year’s chronometry competition with its double tourbillon movement is a vindication of the company’s research and development work, which continues with three more inventions currently passing through the company’s “Experimental Watch Technology” process. These are the binomial oscillator, the differentiel d’égalité and a system with two fixed escapement oscillators that are both inclined within the movement and driven through a differential.Despite creating a brand that has come from nothing to establish a genuine manufacture with around 50 employees in its state-of-the-art premises in La Chaux-de-Fonds (some 60% of components are produced in-house) over the past seven years, Stephen Forsey likens his present situation to standing on the foothills looking up at a mountain whose summit he cannot necessarily see. Given the company’s past record, the journey there and the view from the top are sure to be breathtaking.