For many Swiss watch companies, China has been the strongest market. It seems strange that the Chinese have embraced fine Swiss watches, while relatively ignoring the home-grown Chinese watch manufacturers. After all, China has a rich history of domestic horology, and for the decades that China was isolated from the West, Chinese companies supplied the watch needs for the country’s huge population.

With an intriguing concept—Chinese watches made by Chinese with a European focus on details and high quality—Adrian Choux, the brand manager for The Chinese Timekeeper, hopes to honour the Chinese timekeeping heritage while at the same time bringing Chinese horology to the forefront of people’s minds.“Over six dynasties spanning a thousand years, some of the most influential Chinese scholars spent their lives developing mechanical timekeeping devices,” Choux says. “Although in the early days, the conquest of time was driven by the pursuit of astrological knowledge rather than the precise measurement of time, China was among the first of all civilisations to be able to measure time accurately. Following in the footsteps of these prestigious ancestors, The Chinese Timekeeper is embracing China’s history to create the first exclusive Chinese watch collection.”One of the earliest methods of keeping time was Chinese, a system dividing the day into 100 “Ke” (quarters) equivalent to 14 minutes and 24 seconds. There were no dials nor hands to display the time, but rather each quarter was embodied by a wooden statuette, which became the keeper of time for 14 minutes and 24 seconds. Thus the name The Chinese Timekeeper for this brand.

China madeBased in Hong Kong, all of the watches by The Chinese Timekeeper are 100% Made in China. Though this doesn’t have the cachet of “Swiss Made”, Choux wants people to associate his watches with the highest quality, and linking his timepieces to the illustrious history of China is the first step in that direction. “My watchmakers and designers are based in Hong Kong, and we work with manufacturers who are all in China,” Choux explains. “The movements are from Sea-Gull or Hangzhou, and everything comes to Hong Kong. In a way, it’s quite a peace of mind, because it’s all supervised by Hong Kong people, for quality standards.”“My movements are either small dates or small seconds, which are not so complicated, and the quality is very good,” he continues. “We buy Grade A movements and we test them all. Consistency is still the weakness of Chinese movement manufacturers, so we have to test every movement when it comes in. I have quite strict standards. We are a Chinese brand, so I have to be very careful so every movement is tested for accuracy and power reserve.”The logo of The Chinese Timekeeper is a depiction of the scholar, Su Song (1020–1101 AD), “who was a statesman, astronomer, cartographer, horologist, pharmacologist, mineralogist, zoologist, botanist, mechanical and architectural engineer, poet, antiquarian, and ambassador of the Song Dynasty,” Choux details. “He was, therefore, the natural choice for Emperor Zhe Zhong to create the most advanced astronomical device possible. After six years of research and hard work, Su Song succeeded in building Kaifeng’s famous clock tower, equipped with a water-driven astronomical clock.”

Using the Kaifeng water clock as inspirationThe first collection from The Chinese Timekeeper is the CTK, a watch that has design elements inspired by Su Song’s water clock. All CTK watches are powered by a Chinese automatic movement and there are several limited editions. A hallmark of the CTK watches is that the number ten is written in Chinese, 十, in red, on every watch.So far, sales have been promising. “To date, our sales have been 50/50, Chinese and non-Chinese buyers,” Choux says. “Being French, it’s easier for me to sell to Europeans, but when we go to Beijing and Shanghai for exhibitions, we sell to many Asian customers. The Chinese are buying the watches because they are made in China, and they are proud of Chinese watches. Many experts have said that Chinese will never buy Chinese luxury products, but I am sure this is not true. If you offer a product of quality, the Chinese customers will like it.“I am working with Ace Jewellers in the Netherlands, and Ace is the only retailer I have in Europe so far,” he continues. “I am working with a retailer in Hong Kong and one in Beijing, but I would like to work with distributors in key territories. The Chinese Timekeeper really has the potential to grow big. We are not just another Swiss brand, we bring something different to the market—a new story, a new design, and the new collection we are going to launch is gorgeous.” The price range for The Chinese Timekeeper watches ranges from €1800–2100, excluding VAT. 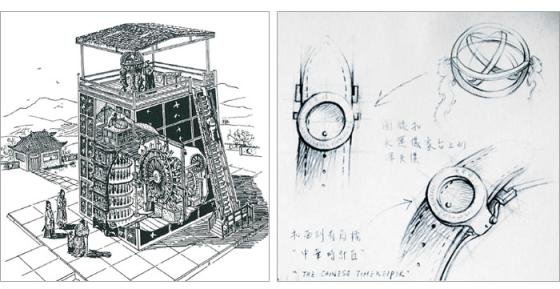 Su Song ClocktowerThe shape of the CTK’s case has been engineered to respect, first with an oversized diameter of 44mm, the round and impressive shape of the Great Driving Wheel of the water clock. Secondly, the other central piece in Kaifeng’s clock tower was the five-storey pagoda from which bystanders could hear and see the display of time. Based on the architecture of this, the case of a CTK is composed of four rings made of stainless steel 316L, which are held together by four large screws on the bezel and four smaller screws on the case back. The visibility of the screws calls to mind the roughness of the construction of the old towers.Armillary SphereAnother element worth noting on a The Chinese Timekeeper lies in the construction of its unique buckle. Chinese astronomers, to understand the heavens, used a tool known as an armillary sphere. The construction of an armillary sphere, or celestial sphere, consists of a series of nestled rings, also named Circles of Heavens, that rotate on a single axis around the Earth. The Chinese Timekeeper’s buckle is inspired by this armillary sphere.