Tamdi Chonge, together with his wife Ursula, took over the Epos watch factory in 2002 from Peter Hofer, who had originally established the brand in 1983. Hofer had been developing mechanical complications for twenty years but with an emphasis on private label production until the 1990s. Thinking of the future for his children, Chonge wanted to turn Epos into a genuine brand that could last and in which distributors would want to invest.

The first of Epos’s novelties for BaselWorld this year recalls one of the private label models from the brand’s past, using an ETA 2892 base calibre with a Dubois Dépraz moon phase module. The traditionally-styled 3391 has a 41mm stainless-steel round case with a striking royal blue dial. The innovative design of the dial is a credit to the family team. White dots on the royal blue give the impression of a night sky, with the day and date appearing in windows that cut across the dial at unusual angles. The moon phase display at 6 o’clock is very clear and the date is indicated by a central hand.

A finely decorated Unitas 6497 calibre is used as the heart of the company’s second new model, the 3412, which is available as a limited edition of 888 pieces. The engraved and circular-grained movement with its blued-steel screws is visible through a transparent back. The 42.5mm stainless-steel round case with a red-gold PVD coating bears the individual number of the limited edition engraved in the 3 o’clock position, with the winding crown located below it at 4 o’clock. The otherwise classic dial, with gold-plated applied Arabic numerals, is hollowed out at 12 o’clock to show off the balance, a signature feature used by Epos since the birth of the brand in 1983. The 3412 is also available with a yellow-gold PVD coating and a white dial with Roman numerals or with a stainless-steel case with a grey dial.

Uncertainties about the movement situation mean that Epos will be focusing on strengthening its existing markets at BaselWorld, as Tamdi Chonge explains. “It is no secret that there will be problems with movements, so we cannot be sure whether we will be able to supply new markets. It is more important for us to be able to meet the needs of our existing distributors who are doing a lot of promotion for the brand.”

Nevertheless, Epos will be able to count on its stock of old movement blanks for some time to come, says Chonge, “We still have a lot of movement blanks in stock, such as the Peseux 7400 and the A. Schild 1726, which we can use. Because Epos was one of the few companies back in the 1980s to be producing purely mechanical watches in the mid-range price segment, the former owner Mr Hofer bought a considerable amount of movements.”

Although the company is relatively small in size, it is already present in some 2,000 points of sale worldwide. But because of its history as a private label producer the brand is less well-known in Europe than in its historically strong markets in Asia, Russia and the Ukraine. For the same reason, you will not find Epos sponsoring any major events, although some partnerships have been entered into at local level, for example, with the sponsorship of the Mercedes-Benz Golf Trophy in Malaysia. But the brand is pinning its hopes on its sole ambassador, Switzerland’s Mike Schmid, who won the gold medal in Ski Cross at the 2010 Olympic Winter Games in Vancouver. 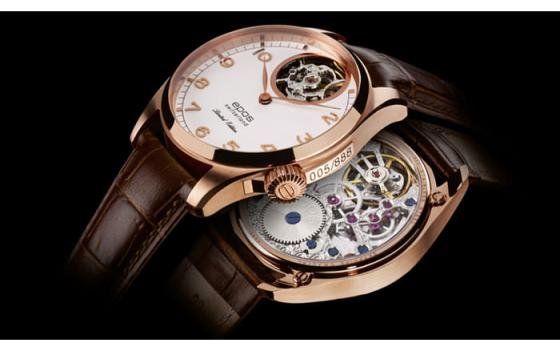 “We have been sponsoring Mike Schmid for the past two years,” says Chonge. “We are happy with this because the next Olympic Winter Games are in Sochi and if Mike takes another gold medal this will be very important for us in the Russian market.”

Mike Schmid also represents the sports watches of the brand, which are just one of eight different lines of gents’ models alone that Epos produces, in addition to ladies’ models and traditional pocket watches.