History has a habit of repeating itself and it is worth noting that the development of the watchmaking industry in the small village of Fleurier is in no small part due to the work of Edouard Bovet and his brothers, who from 1822 practically monopolised imports of watches into China as trade with the country improved. The Fleurier heritage, as well as a nod to China’s help in the company’s original success, now pervade the Bovet brand, which over the past decade has been elevated to the summit of fine watchmaking by its owner Pascal Raffy.The company today employs around 140 people spread across its head office in Plan-les-Ouates in Geneva, the historic Château de Môtiers in the Val-de-Travers, purchased by Mr Raffy in 2007 (which houses the company’s Haute Horlogerie Artisanale workshop) and the Dimier 1738 company (formerly Progress Watch) in Tramelan, in the Bernese Jura. Building up this mini watchmaking conglomerate has allowed Bovet to amass a considerable amount of expertise in the world of fine watchmaking (Dimier 1738 alone masters 41 different crafts) and produce exquisite timepieces that are both highly complicated and sumptuously decorated. 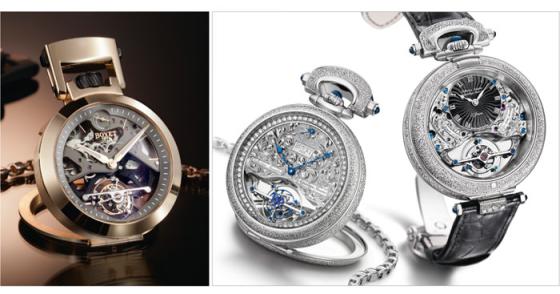 Although the emphasis on the brand’s heritage and traditional watchmaking skills are evident in all its timepieces, this has not precluded an interesting collaboration with Pininfarina, which dates back to the 80th anniversary of the renowned Italian design house in 2010. The original Ottanta model that Bovet presented in celebration of this anniversary was followed by the Cambiano chronograph last year. For 2012, a new Ottanta Due tourbillon, fitted with a completely revised tourbillon movement, further enhances this small collection.The unique Amadeo case is the cornerstone of the Bovet collection. With the crown at 12 o’clock and a special strap attachment, the watch can be worn either as a pocket watch or a reversible wristwatch. The hinged case also means that it can serve as a stunning miniature desk clock. To celebrate its 190th anniversary in 2012, Bovet presents the new Amadeo Fleurier 0 collection in which the Amadeo case houses a completely new tourbillon movement with a 19th century-inspired design that will be the basis for all of Bovet’s new complications. With the tourbillon carriage now located at 6 o’clock and all components other than the tourbillon housed on two three-quarter plates, more space was available for the regulating organ and the power reserve could therefore be increased to seven days. The power reserve is indicated at 12 o’clock on the dial and is the only other indication on the dial apart from the hour and minute hands, as well as the seconds hand on the tourbillon carriage.Whilst the dial side maintains a discreet elegance, the movement side shows off the talents of the craftsmen at Dimier 1738. An off-centre sub-dial at 12 o’clock shows the time using inversed hands and is surrounded by the exquisite hand-chiselled Fleurisanne decoration on the three-quarter plates, with the tourbillon carriage visible directly below it at 6 o’clock.

The true rising starThe Amadeo Fleurier Rising Star takes things a step further by adding two additional independent time zones to the guilloché dial on the three-quarter plate, each with its own separate day or night indicator and a window indicating the chosen city for each time (out of a choice of the 24 cities representing each of the world’s time zones). The choice of three different time displays alludes to the three places that were instrumental in the success of the three Bovet brothers: Fleurier, Canton (China) and London. 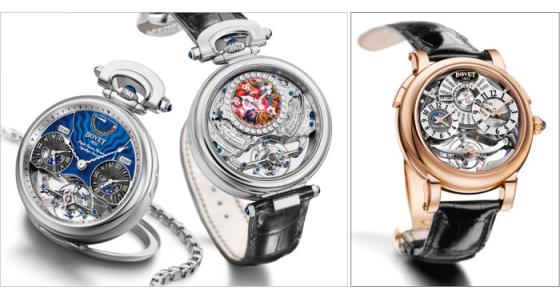 While the 463 components within the movement remain skilfully sandwiched between the guilloché dial on one side and the chiselled three-quarter plates on the other, every effort has been made to show off in the best possible way the 66 components of the tourbillon carriage. The result is a tourbillon that is clearly visible from both sides, allowing a critical view of the black polished tourbillon bridge, which requires a full day of bevelling work alone. Beneath this beats an aluminium balance chosen for its lower weight (to improve the power reserve) that has three hatchet-shaped movable weights in blued steel screwed to it in order to allow optimum adjustment of the going rate. The distinctive shape of these weights was first seen on the balances of timepieces manufactured by Edouard Bovet in the 19th century.The Rising Star is a limited edition of 190 pieces to commemorate Bovet’s 190th anniversary. Furthermore, nine pairs of unique pieces will be produced with miniature paintings on mother-of-pearl (which Bovet claims produces a better finish than on grand feu enamel) on the movement-side dial in recollection of those found on 19th century timepieces in the private collection of Bovet. The idea of producing watches in pairs harks back to the practicalities of exporting watches in the 19th century: because any repairs would require a four-month boat trip back to Switzerland, Bovet shipped watches in pairs so that their owners had a spare if they had to return a watch for any reason. This quaint detail serves to illustrate just how much both watchmaking technology and transport links have improved over the past two centuries!