Jean-Claude Biver – passing on the knowledge at Hublot


Jean-Claude Biver – passing on the knowledge at Hublot

In our survey of various retailers from around the world in this issue, several include Hublot in their “must-see” brands at BaselWorld. Hublot has emerged from near anonymity a decade ago to become a major player in the luxury watch market as part of the LVMH group. Jean-Claude Biver was the man at the helm, until the announcement came late last year that his right-hand man, Ricardo Guadalupe, would be taking over as CEO of Hublot from 1 January 2012. But is the visionary Mr Biver really taking a back seat? Europa Star put this and other questions to Hublot’s Chairman of the Board at the brand’s manufacture in Nyon.

Europa Star: How was business in 2011 for Hublot?

ES: Everyone is talking about China. How important is this market for Hublot?

ES: So if your sales aren’t coming from China then where are they coming from?

J-C. B: It’s quite well balanced. They come from the USA, South America, Europe, Russia, the Middle East and Asia excluding China, in particular Singapore and Japan where we are very strong. In a way we are running on five cylinders instead of six. China is the sixth cylinder and the piston is broken. But even with only five cylinders we are doing better than our competitors who are running on six!

ES: In the wake of the SIHH and in the run-up to BaselWorld there is a lot of talk of a return to classicism. We have seen this to some extent at Hublot with a refreshed design for the Classic Fusion model. Would you agree that this is becoming a trend?

J-C. B: I would agree in the sense that what you say is true. But is this what the market wants? I would say no. Is it what the Chinese market wants? Then yes. It’s clear that if you sell a large proportion of your production to China (and remember that a lot of Chinese tourists buy their watches abroad, so we can assume that perhaps more than 50 per cent of production is bought by Chinese) and more than 50 per cent of your market wants classic watches, then everyone will start producing classic watches. But do the Argentinean, the Brazilian, the Mexican, the Russian and the Indonesian want this as well? No! So by concentrating on classic designs you are losing a lot of interest from customers in some important markets. I can understand brands wanting to serve their biggest markets but it’s not because that this is the case in China that we can speak of a global trend. 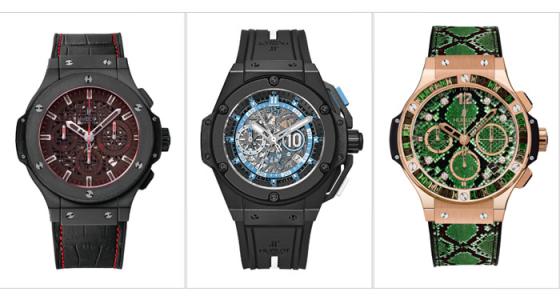 ES: You launched Magic Gold in November last year, which promises to be scratch-resistant and keep its look forever. At the time you mentioned discussions with Ferrari on the use of the same production technologies for aluminium. Can we expect further developments in this direction in Hublot timepieces, too?

J-C. B: We can now produce a superlight aluminium here in-house. It is 35 per cent lighter than standard aluminium, which is a huge difference—it is a third of the weight. It is also harder, scratchproof and rustproof. We could use this in the movement, too. We could even produce a “full aluminium” watch. I think the trend towards superlight has already begun, so we will move more and more towards ultralight components. Not just for mobile phones, computers or spectacles but for everything—including watches. This is the future and at BaselWorld we will have watches in Magic Gold and Magic Aluminium. These materials could end up accounting for 50-60 per cent of our production, but this depends on our internal production capacities. Because we are the only ones in the world to produce this material, we cannot depend upon anyone else.

ES: Ricardo Guadalupe officially took over as CEO of Hublot at the start of this year. To what extent will you be retiring from life at Hublot, if at all? And how easy or difficult is it for you to do so?

J-C. B: It’s very easy because it is my wish. Why do I want to do this? Because it’s a responsibility I have not to take what I know to the grave with me. If we all did this without passing on our knowledge there would be no development. Scientists do this by publishing books, which is why we have libraries—they are our memory of knowledge. I don’t write books, so I pass this knowledge on to my personnel. So it’s my responsibility but it is also the right of my employees to know this. And finally it is in the interest of the brand, because Jean-Claude Biver is not Hublot.