Before taking over Girard-Perregaux, the late Gino Macaluso studied architecture. Obsessed his entire life by an art that had always inspired him, Macaluso would surely be delighted to know that his descendants were building upon his passion by creating a superb trilogy dedicated to Le Corbusier.

This trilogy came about not just because of mere chance between a manufacture established in La Chaux-de-Fonds and one of the city’s most famous native sons (Le Corbusier was born there in 1887 as Charles-Edouard Jeanneret). Especially since before becoming a visionary architect who decisively transformed 20th-century architecture, Le Corbusier trained as an engraver-carver at the school of art in La Chaux-de-Fonds. 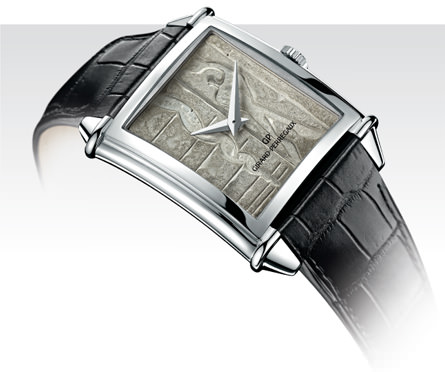 After a long formative voyage throughout Europe that would take him as far as Istanbul, Le Corbusier returned to his native town and established himself—without an actual diploma —as an architect. His first project was a house intended for his parents, the Villa Blanche. Recently restored, this is the location that Girard-Perregaux chose to present its Trilogy.

The Trilogy pays tribute to three aspects of the multi-faceted Le Corbusier: the young engraver-carver inspired by Art Nouveau; the architect and furniture designer who sought “space, light, and order”; and the pioneer of urban planning, the king of concrete.

These three “facets” of the famed architect are expressed by remarkable and very original dials, which share the common case of the perfectly proportioned Vintage 1945. The first watch, the pink gold Vintage 1945 Le Corbusier – La Chaux-de-Fonds, offers a superb reproduction, in mother-of-pearl inlay, directly inspired by one of his early creations.

The second watch, the Vintage 1945 Le Corbusier – Paris (the city that was his home from 1917), pays tribute to his novel proposals, notably his furniture made of steel, leather and skin, and his human-scale Modulor. This watch offers a hand-engraved steel dial with a calf leather bracelet.

The third watch, the Vintage 1945 – Marseille, whose dial is made of concrete [a world’s first, to our knowledge, in timekeeping] honours the famous Radiant City, a vast reinforced concrete housing development that Le Corbusier built in Marseilles between 1947 and 1952.

This lovely Trilogy demonstrates the rich relationships between art and timekeeping.

TIME.KEEPER T-Rex is the name given to the latest iteration of Urwerk’s UR-100 collection. It carries both Urwerk’s genome in its satellite hours and that of its (...)