Unlike with many other watchmaking factories, a visit to Girard-Perregaux’s production facilities, housed in a magnificent turn-of the-century building complex in the heart of La Chaux-de-Fonds, is enough to remind you of the company’s 223-year history. You could pass by the subtle and faithfully restored trompe l’oeil decoration of the interior (the grain on the wood and the marble on the columns and balustrades is achieved with meticulous painting) but it is impossible not to notice the first-generation CNC machine from 1991 at the entrance to the workshop where the movement components are manufactured. With 15 different tools that all had to be changed manually, the machine could produce a finished mainplate in around half an hour. With the latest, much smaller machines a few steps away, the time is reduced to eight minutes and the machines can be programmed by Wi-Fi and connected in series to offer greater flexibility. Nearby, watchmakers assemble movements on state-of-the-art production lines that automatically present the movement the right way up for the corresponding operation and assist the watchmaker with integrated electronic displays.

Girard-Perregaux has evolved rapidly over the past twelve months under the new CEO of the Sowind Group, Michele Sofisti. “Only a few years ago Girard-Perregaux had over 700 different references,” he told Europa Star, “now the figure is 140. Simplification of the collection was one of my main priorities, as was communication, which we have changed with our Young Watchmakers project and our partnership with Dominique Loiseau.”

Besides the more obvious changes (Girard-Perregaux, together with JeanRichard, have now left the SIHH and were present in BaselWorld this year together with Gucci on a new stand in Hall 1), much has been done behind the scenes to streamline workflows and production processes, with the result that it now takes “twelve months from sketch to finished product on the wrist”. This has translated into a 50 per cent increase in production last year alone, with “double-digit” growth in sales over the same period. Greater vertical integration is the next step in the strategy, “We want to push to bring as much as possible back in-house to strengthen our position as a manufacture,” Sofisti concludes. 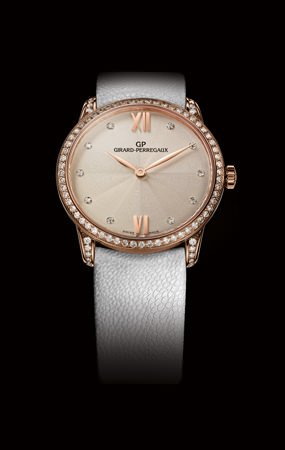 The core collection has also been reduced from eight different families to five: the Girard-Perregaux 1966, the Vintage 1945, the Cat’s Eye model for ladies and—new for Basel this year—the Traveller collection and the Constant Force Escapement. This totally new escapement design, with two escape wheels, no pallets and a strange undulating wire suspended between two arms, guarantees a transmission of constant force to the balance wheel over the entire duration of the one-week power reserve. Girard-Perregaux also offers genuine manufacture models for ladies, as the new 1966 Lady model shows: its pink-gold case set with diamonds and held on the wrist with a calfskin strap encloses the GP03200-0005 self-winding mechanical movement, which is visible through a sapphire crystal case back.