Having started at Corum in 2005 as vice-president of operations, Antonio Calce became CEO in 2007 and, when Séverin Wunderman died in 2008, also became a minority shareholder in the brand, alongside the Séverin Wunderman foundation. From the moment he arrived, Antonio Calce set about restoring consistency to a brand which had definitely come back under the spotlight (notably with the Bubble phenomenon) but had lost a little clarity, or rather consistency, not just with its products but also with its distribution. Today, Antonio Calce, who has not held back, believes that he has returned credibility, legitimacy and sustainability to the brand established by René Bannwart. He achieved this with a strict streamlining of the range—which today has reached full maturity—and a restructuring of its distribution, as well as by taking full control of the creative process.

Thus today the entire chain, from the original designer’s sketch to series production, is handled in-house. Design, modelling, construction, R&D for cases and movement, methods, naming, setting, series-production assembly, testing, manufacture movement assembly (mainly for the Bridges collection)... everything but the “shavings” (in other words, the production of components) is done under the same roof at the manufacture in La Chaux-de-Fonds.

Two pillarsAntonio Calce, an engineer by profession, likes clear and well-defined structures. His propensity for rigorous order (tempered by some Latin aesthetic fibres) was applied to Corum’s product range, which has thus regained its great clarity. The main collection is split across two pillars: on the one hand the Corum Bridges line, on the other the Admiral’s Cup line.

A complete range is offered within these two lines. The Admiral’s Cup is divided into two segments: one of classic expression, with the Legend 42mm, and one “extreme sports”, which comprises “instruments” equipped with genuine professional functions (regatta countdowns, chronographs etc.), in which the latest example is the 45mm AC1, a new chronograph with a vertical clutch, thinner than its predecessors (with a Dubois Dépraz movement), even more racy and with a superb and complex case that, for the first time, is not twelve sided. 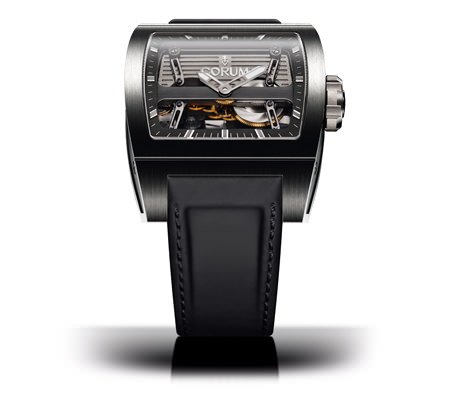 In the emblematic Bridges line, which is unique to Corum, there is an apparent distinction between the classic family of the Golden Bridge, available as a tourbillon with a mini rotor, as well as in manual and self-winding versions, and the highly contemporary T-Bridge, which is available as a flying tourbillon, a mechanical model with a three-day power reserve, Miss and Lady models and, as an absolute novelty this year, the Corum Ti-Bridge Automatic Dual Winder. Limited to 200 pieces, this new Ti-Bridge has a one-of-a-kind linear winding system that uses two masses in tungsten.

This tonneau-shaped watch is a symbol of the rejuvenation and wonderful blossoming of the Bridges collection and has a very high degree of refinement to its finishing, which illustrates Corum’s new ambitions (to take just one example, the Golden Bridge, with its absolute transparency, sometimes showed off the less-than-appealing body hair on the wearer’s wrist. Adding a finely metallised sapphire disk on the case back has not only put this “defect” right but has also added an extra depth to the piece, which produces a very nice effect).

A true storyTwo new heavyweight recruits will help Antonio Calce to bring even greater watchmaking legitimacy to Corum, which, historically, is a brand where creativity has always been at the heart of its activity. Laurent Besse, a proven specialist in R&D and founder of the Artisans Horlogers, has been appointed head of the R&D department at Corum.

Another high-level appointment, Vincent Calabrese, is none other than the historic creator of the Golden Bridge, who sold the patent to René Bannwart in 1977. With the arrival of Vincent Calabrese, who has been appointed “ambassador” of his own ingenious idea, Corum is in a way going back to its roots. “Better than just story telling with some marketing sauce, this is an opportunity for us to tell a true, genuine, human story that is quite rare in watchmaking,” Vincent Calabrese tells us. 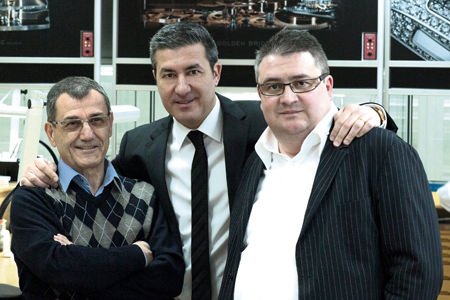 Antonio Calce shares the same view: “To rejoin forces with the person who invented this iconic movement, which has become a pillar of our brand, is a wonderful opportunity and will allow us not only to explore new avenues but also to promote them worldwide, with a spokesman who has an historical credibility.” The tour starts in Basel, on a spectacular new three-storey stand which gives a nod to the notion of transparency entrenched in the Golden Bridge. Fully refocused on the fundamentals and with a rich new human capital, having gained independence for its production capacity and progressing step-by-step towards greater vertical integration, with a totally reorganised distribution network, Corum is back at centre stage in the world watchmaking scene.