Carl F. Bucherer: selling in and selling through


Carl F. Bucherer: selling in and selling through

Carl F. Bucherer is doing well. The clearest indication of this is that Jörg G. Bucherer, the grandson of Carl Friedrich Bucherer, who established the family-owned company 125 years ago this year, has been seen wearing his eponymous brand’s timepieces on several occasions.

Over the past years, under the leadership of CEO Sascha Moeri, Carl F. Bucherer has grown substantially. “When I took over in 2010 I had the order from the board of directors to increase the volume and especially the profitability,” he told Europa Star.

Triple salesMoeri has achieved this with an impressive tripling of sell-through from 6,500 pieces in 2009 to 20,000 pieces last year. An important and welcome side-effect of this has been that the increased production of the brand’s in-house movement has brought down the average cost, with a corresponding increase in margins. A shift in product strategy also helped to boost the brand. “Before, the strategy was focused on the Patravi, which represents the technological advancement of Carl F. Bucherer with a sturdy masculine appeal, targeting a specific type of customer”, says Moeri. “Ladies’ watches and classical gents’ watches with big complications were not prioritised. Today, we have four different lines, each of which holds equal importance. The Manero, for example, already accounts for 25 per cent of our total sales by volume.” 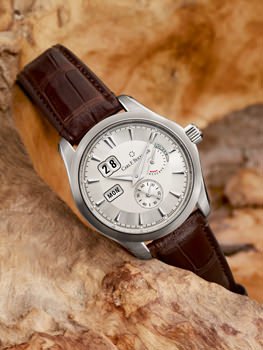 Although the boom in China has undoubtedly helped the brand, Moeri offers a different perspective on the market compared with other high-end brands, who may indeed be selling in lots of watches to China, but have not yet necessarily found their target customer. “We sell in and sell through,” he says. “Forty per cent of our sales come from Asia (including Japan and South-East Asia) but the biggest increase in 2012 came from Europe—not because of the Europeans but because of the tourists, mainly Asians.”

Big potential in the USIt is, however, not only Asia and Europe that are the focus of Moeri’s strategy for the immediate future, but also the USA, the traditionally strong market for the brand’s flagship Patravi model. “I see a huge potential for the brand there and we have a big advantage,” he says. “We can step into the void that has been left at retailers who lose big brands when they open their own stores.” In this particular case, Moeri alludes to Rodeo Drive, which has quickly been swamped with mono-brand watch boutiques. 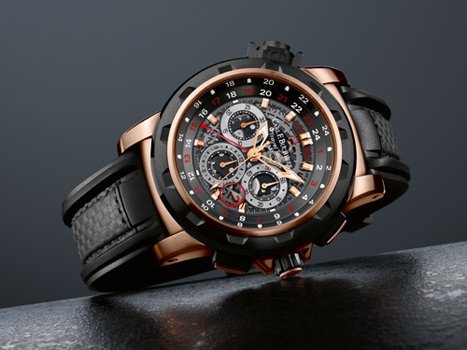 Carl F. Bucherer’s marketing strategy sets its own unique standards. Despite the brand’s relatively small size, it produces its own magazine in-house which is published in all major languages. Breaking the standard of today’s product placement deals, Carl F. Bucherer believes in the principles of its family culture and friends of the brand who are watch aficionados and wear the watches aside from negotiations and compensation. As if to drum home this point, Moeri pulls out his phone to show photos with watch aficionado Arnold Schwarzenegger and his friend Sylvester Stallone, both wearing stout Patravi TravelTec models.

At BaselWorld the brand presented several new products such as the Manero PowerReserve, which features the company’s calibre CFB A1011 in-house movement, and limited editions of 125 pieces in celebration of the 125th anniversary of the Bucherer retail chain: The Patravi TravelTec FourX (three time zones, four materials) and the Alacria RoyalRose for ladies, set with diamonds and sapphires.