Did you know that the first G-Shock was presented in April 1984? Almost 30 years later tens of millions of these watches have been sold worldwide but the G-Shock does not seem to have aged one bit. Has it become a quartz icon?

During its long career, the tough G-Shock, which saw its first feminine version in 1991 with the Baby-G, has done just about everything it could do in the world of watchmaking and wrist electronics and we have lost count of the different functions it offers. But the “icon” still has tricks up its sleeve. 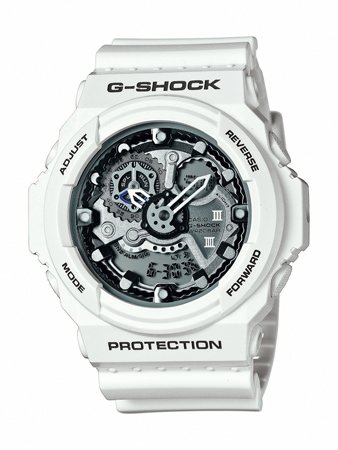 One of its most recent versions uses traits on the dial taken directly from mechanical watches. As its designers explain, the new GA-300-1AER “bridges the gap between the industrial and mechanical look of the last century and digital technology.” This desire to give “a mechanical watch feel” without the watch actually being mechanical can be seen in the dial, with its visible cogs, riveted components, openworked metal bridges, all alongside LCD displays. Protected against the effects of magnetism, water resistant to 200 metres and quite obviously shock resistant, it is available in black or white.

In the same family, the G-Shock Gravity Defier is intended to be a genuine and consummate aviator watch. As a veritable cockpit on the wrist it offers multiple functions including, for the first time, an integrated digital compass. At the push of a button, the seconds hand immediately converts into a compass needle. It also shows the temperature and can activate a world time display. Big hour markers and fluorescent hands, as well as a powerful LED light, allow night flights. It is available in matt black with red accents, black with metallic and yellow accents or in navy blue with a white dial.

A digital compass and thermometer are also included in the latest Edifice chronograph. Casio has dedicated this model in the sporty line with a more traditional look than the rugged G-Shock to the Infiniti Red Bull Racing Formula 1 team, which the brand has been a partner of since 2009, and for which world champion driver Sebastian Vettel is the ambassador. Everything about its design aims to convey precision and speed, under the motto that the brand reserves for this sporty collection: “Speed & Intelligence”.