Girard-Perregaux’s Constant Escapement exploits the phenomenon of a blade buckling to provide constant-force impulses to the balance.

By happy coincidence, Mr Girard-Perregaux’s first name of Constant lends itself well to the revolutionary type of escapement that the brand presented in a functioning commercial timepiece for the first time at this year’s BaselWorld watch fair. Because the Girard-Perregaux Constant Escapement addresses one of the main deficiencies of the configuration of a conventional mechanical watch – the problem of ensuring a constantly stable impulse to the regulating organ to maintain the same level of precision over the entire power reserve of a watch, in spite of the fact that this power reserve, by the very nature of the movement’s construction, gradually reduces as the springs in the barrels unwind. 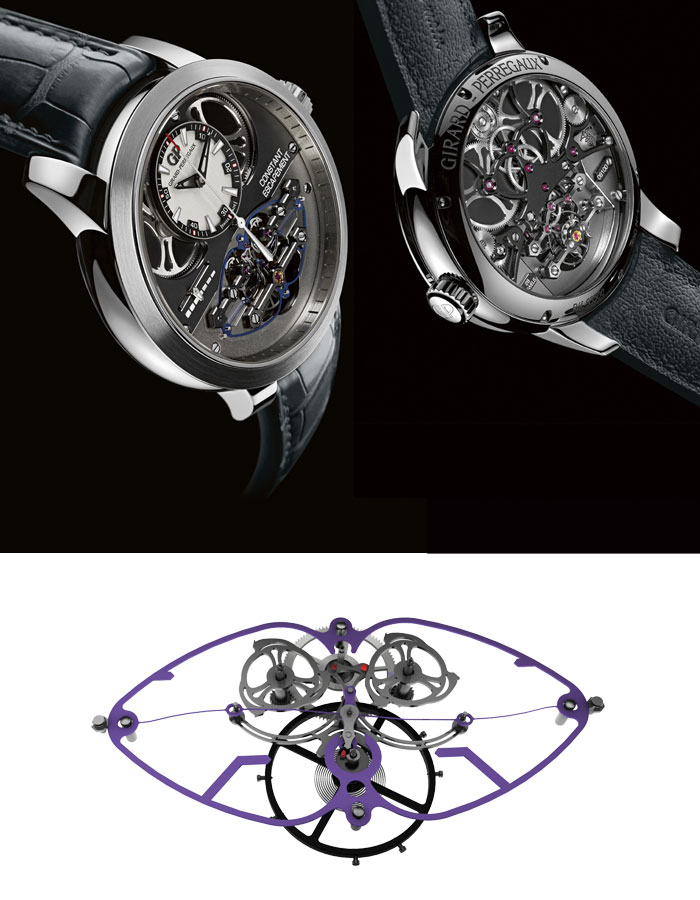 Girard-Perregaux has addressed this problem in a unique way, working over the past five years to perfect its constant escapement, which was only made possible with the use of silicon for watch components and the arrival of DRIE technology (deep reactive-ion etching) for manufacturing the small and complex components for the regulating organ of a timepiece. The theory behind this new escapement comes from that of “buckled blades”, essentially a form of spring, which, when compressed, approaches a state of instability before buckling.

The key point here is that the buckled blade transmits its energy instantaneously and at a constant rate, which is perfect for transmitting impulses to the balance. In the constant escapement, the blade is a mere 14 microns thick (one-sixth of the thickness of a human hair) and is arranged in a symmetrical construction that balances the forces at work at the centre of the balance wheel. Two escape wheels with a new design are responsible for handling the transfer of energy (from two barrels coupled in parallel in a new, patented design) to the time display. Each wheel has only three teeth, to correspond with the 3Hz frequency of the movement, and is connected to the same differential.

Used for the first time in the Girard-Perregaux GP09100-0002 hand-wound mechanical calibre, the constant escapement helps to ensure a power reserve of around one week with a theoretically constant precision. Measuring this, however, poses a new kind of challenge: the amplitude of the balance wheel, the beat and the overall accuracy of a conventional mechanical watch can be determined acoustically using workshop devices, thanks to the unmistakable ticking of the watch. Unfortunately, the completely different sound produced by the constant escapement means that such machines cannot be use to measure its accuracy. The only way to overcome this problem is to use a high-powered laser camera. So while the wearer of the beautiful Girard-Perregaux Constant Escapement L.M. (for the late Luigi Macaluso) can admire the new form of ballet that takes up half of the 48mm case in 18-carat white gold and marvel at a distinctive new type of ticking, he will just have to take the brand’s word for it that the escapement lives up to its name.