ESCAPEMENTS - URBAN JÜRGENSEN - Innovation in the service of tradition


ESCAPEMENTS - URBAN JÜRGENSEN - Innovation in the service of tradition

Urban Jürgensen adapts the detent escapement to the wristwatch.

We owe the invention of the detent escapement in large part to the Longitude Act passed by the English Parliament on July 8, 1714, which offered a reward of £20,000 to anyone who could find a method of determining longitude to an accuracy of half a degree. A similar prize was offered by the French Academy of Sciences four years later. It is therefore no coincidence that the names associated with the development of the detent escapement and the marine chronometers it was used in are either English or French: John Harrison, George Graham, Thomas Mudge, John Arnold, Thomas Earnshaw, Pierre Le Roy and Ferdinand Berthoud.

Le Roy is credited with first inventing the detent escapement in the mid-1700s, although all of the above-mentioned watchmakers produced their own configurations in the race to produce a marine chronometer accurate enough to win the substantial prizes on offer. The main objective of the escapement was to allow the balance wheel to oscillate as freely as possible, without being affected by friction from the gear train. _The resulting design used a detent to provide an impulse directly to the balance from the escape wheel, doing so only once for each oscillation of the regulating organ, rather than twice in the case of the lever escapement. While this gives obvious benefits in terms of precision, the detent escapement itself was much more prone to shocks than the traditional lever escapement. No problem for a marine chronometer mounted on gimbals in a solid wooden case, but impractical for use in a smaller pocket watch or wristwatch.

For Helmut Crott, the owner of Urban Jürgensen, the detent design was the natural choice when looking for a new type of escapement for the brand, for two main reasons. “We know the detent escapement is the most precise, because the balance is free, but there is the problem of shock resistance. But the detent escapement is also part of high-precision watchmaking history. It is a link between the past and the present but we wanted to take it a step forward rather than just copying an old design.”

The sensitivity of the detent escapement to shocks means that there is a risk of “tripping”, the unwanted release of the escape wheel, which can damage the movement or even stop it. Urban Jürgensen’s elegant solution to this problem is a specially designed detent that has a perfectly balanced counterweight to the pallet jewel positioned at the other end of the lever. “The trick was to ensure that the pallet fork could be returned if it tried to escape,” continues Mr. Crott. “So we have added a small aperture of 15-20° in the safety roller, where the detent can penetrate. That is the basis of our patent, but the system is of course more complicated than that and depends on the lightness of the materials used and the methods used to manufacture them. To take just one example, the ruby used for the locking stone is just 0.08mm thick and is therefore very difficult to produce.” 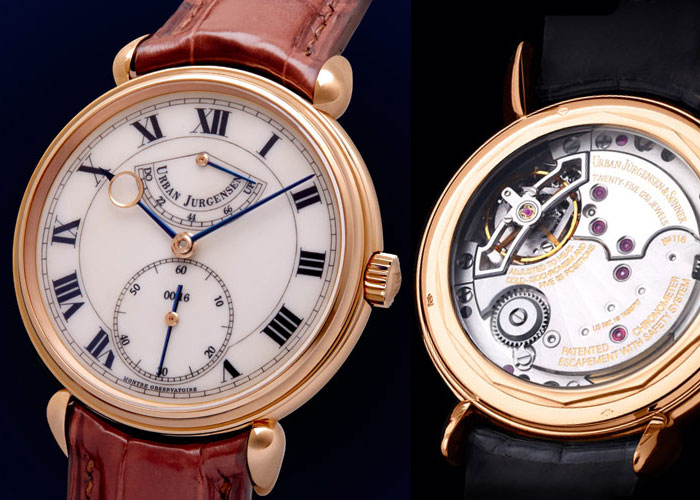 MONTRE EMAIL OBSERVATOIRE (Front & Back)
Presented at BaselWorld 2013, the ref.11C/R/E/O has a completely handmade and handpainted dial. It is a limited edition of 20 featuring the brand’s P8 in-house calibre with the pivoted detent escapement.

But the pivoted detent escapement offered by Urban Jürgensen is just one element in an overall package that has been designed from scratch by the brand, which includes a variable-inertia balance wheel with an inertia of 24g/cm3 (double the usual figure of 12g/cm3) and optimised tooth profiles on the gear wheels. “We wanted a robust movement that had been simulated and tested and one which would provide a lot of energy, which would give us more flexibility for regulation,” explains Crott.

Helmut Crott’s long-term view of the evolution of this escapement also considers the important issue of after-sales service. “Our aim is to have a movement that any experienced watchmaker can assemble or work on,” he says. “In 50 or 100 years’ time, an experienced watchmaker should still be able to repair it.” _Such figures may appear exaggerated, but they illustrate well Mr Crott’s appreciation of tradition and the need for perpetuating classic design. Although the brand produces only 50 examples of this escapement each year, it aims to increase this figure with a gradual industrialisation process, while maintaining the escapement’s exclusivity. Models featuring the pivoted-detent escapement sell alongside those with the brand’s own in-house lever escapement and, as Mr Crott suggested to Europa Star, may also be joined in future by a tourbillon with the brand’s pivoted detent escapement.