ARTS & CRAFTS - BOVET and the art of engraving


ARTS & CRAFTS - BOVET and the art of engraving

In order to appreciate the attention to detail of the work carried out by Bovet at its facilities for cases and movements (Dimier 1738, in Tramelan) and decoration and assembly (the beautifully restored Château de Môtiers near Fleurier), you must first adapt to new dimensions and the world of the ultra-minuscule.

Let us first consider the component side of this 99 per cent manufacture (the only elements purchased from outside are the mainsprings and the watch straps) at Dimier 1738, where the 70 employees represent no less than 41 different professions associated with watch manufacturing. Here, all movement components are produced by stamping or wire erosion and finished to an astonishing level of detail. Just one example that I observed was a humble pinion measuring a mere 0.12mm in diameter that has to be machined before polishing. The machinist has to grind down 1/100th of this already tiny diameter and has a range of just four microns, or four millionths of a metre, in which to operate… but half of this must be left for the polisher to work with! Simply setting the machine for this task (a special milling machine with two different milling discs, one in ceramic and one in aluminium oxide), adjusting the height and centricity of the working piece and spacing the milling discs on the machine, can take up to two days. Another example is the tiny tourbillon bridge, which can take up to two hours to hand file from the raw component into its cylindrical shape before it is passed on to a polisher, who then has a whole number of steps to complete to prepare it for the mirror polishing that gives it its final sheen. This is before we even consider the painstaking engraving of the movement, which takes around one entire week of work for Bovet’s signature Amadeo timepieces. 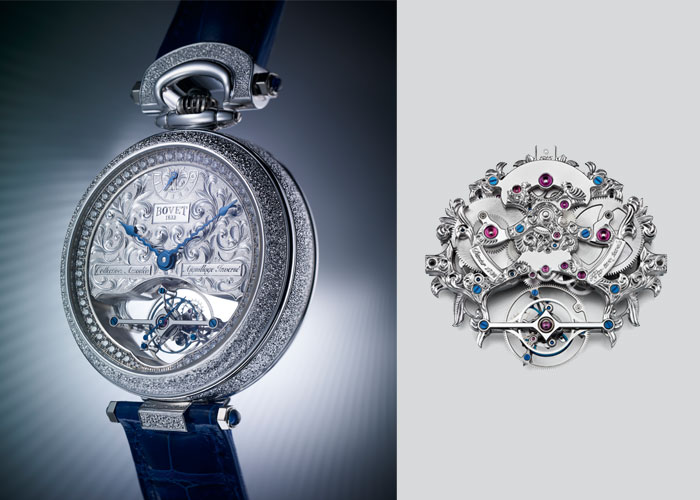 Left: Amadeo Fleurier 7-day Tourbillon - Right: Calibre 14BM02AI
Amadeo Fleurier 7-day tourbillon with reversed hand fitting This doubled-sided unique piece uses the 45mm convertible Amadeo case in 18-carat white gold that allows the watch to be worn on the wrist, as a pocket watch or used as a desk clock. The case middle, case back, bow, bezel and lugs are all hand chiselled, the front dial is hand-engraved with the Fleurisanne pattern and the reverse dial with black guilloché. The calibre 14BM02AI hand-wound tourbillon movement powers this piece. It operates at 21,600 vibrations per hour and offers a seven-day power reserve.

Over in the calmer atmosphere of the Château de Môtiers, with its sweeping views across the Val de Travers, engraving work is carried out on the complicated Amadeo case, bezel and bow. Here, too, there is a clear impression that work is being carried out in a different dimension. As I crane my neck to observe the engraver working using a microscope on the Fleurisanne pattern that is typical of Bovet, I notice a page of notes written in a handwriting that appears barely legible to the naked eye–even the engraver’s jottings are on a different scale! This small workshop in the attic space of the chateau, with its visible stone and wooden beams (which have been specially treated as part of the workshop’s conversion into a controlled air zone), perpetuates the tradition of Edouard Bovet, who introduced a hitherto unknown level of detail into the engraving of movements and watches. 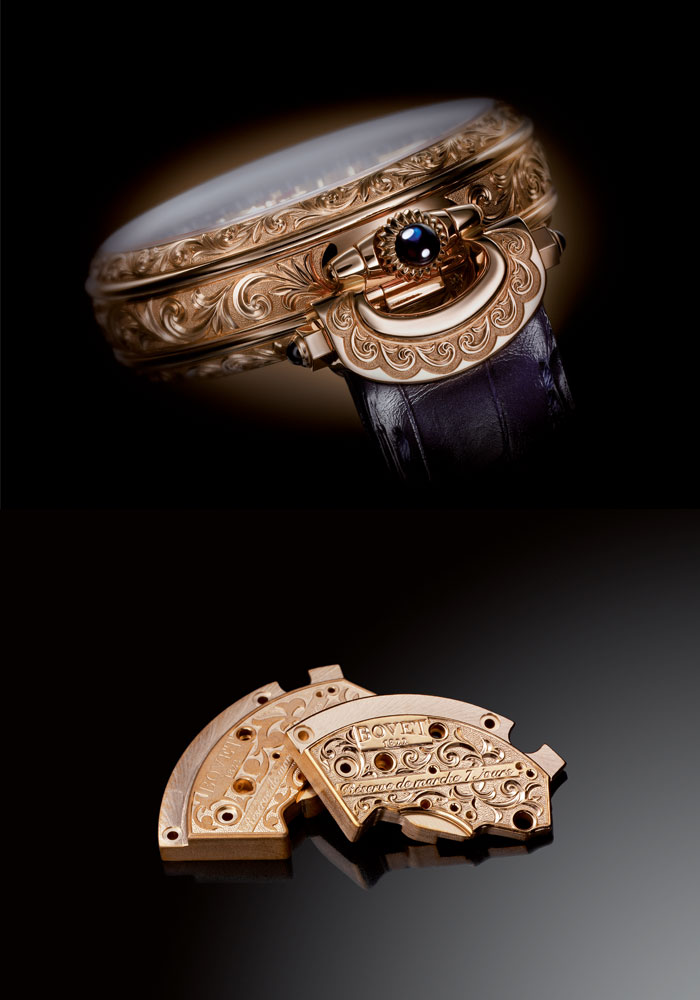 Having been offered the chance to engrave a small brass plaque, I soon appreciate the level of skill required of the engraver: the engraving tool must be seated firmly in the palm of the hand; the engraving motion should come from the elbow in a straight line along the arm; the arm should remain still, while the piece being engraved is rotated. But even after this is explained, the real skill is knowing the right amount of pressure to apply, which can only come from many hours of engraving experience coupled with the engraver’s own dexterity, as my poor attempts to engrave a simple, constant straight line confirmed. The Fleurisanne engraving is not only specific to Bovet but can also vary according to the individual engraver, who is involved from the outset in the design of the engraving on the case. Altogether, the engraving of the caseband, case back, bezel and bow can take up to 100 hours – a full two and a half weeks of work! Things get even more unpredictable for the chiselling decoration that is also specific to Bovet movements and cases. Here, the engravers say that the chiselling decoration can change on the same piece if they are interrupted and even show differences between work done by the same engraver in the morning and the afternoon. The effect is nevertheless remarkable, with sparkling reflections that rival those of a gem-set piece.

Bovet’s in-house capabilities also include miniature painting, which makes the brand a one-stop-shop for all the métiers d’art. Add to this the recent announcement by Bovet that its Amadeo Fleurier Rising Star Triple Time Zone Tourbillon was the brand’s first timepiece to be certified by the Fleurier Quality Foundation after passing its rigorous tests (the timepiece must pass the COSC, Chronofiable and Fleuritest examinations in addition to being 100 per cent Swiss Made) and you have the complete package of high-end Swiss watchmaking.