As we noted earlier this year in our report on Scandinavian watch brands (see Europa Star 02/2013), GoS Watches is the Swedish partnership between bladesmith Johan Gustafsson and watchmaker Patrik Sjögren. After producing watches with Damascus steel cases equipped with the Unitas 6498 movement, the company presented its first to feature a Damascus steel movement, the Winter Nights, at BaselWorld this year. 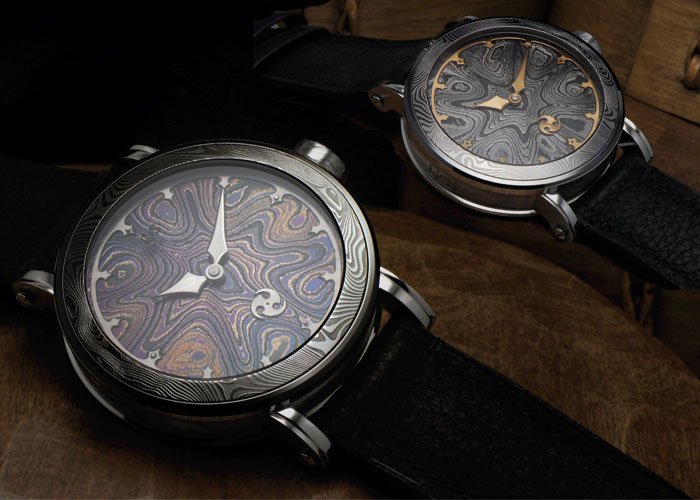 Winter Nights by Gustafsson y Sjögren (GoS)
A limited-edition of 10 watches with a 45mm case in Damascus steel and the GoS calibre 1 movement developed for GoS by Martin Braun, which has a 4/5ths bridge and balance cock made from a single piece of solid handforged Damascus steel. The movement incorporates Martin Braun’s HPE innovation in the use of silicon in the escape wheel and lever and offers a power reserve of 72 hours (with power reserve indicator on back).

The limited edition of 10 pieces features an in-house movement that has been developed with Martin Braun after a first meeting at the Geneva Time Exhibition in 2011. “I made the first prototype or proof of concept by customizing a Unitas 6498 movement with a Damascus steel bridge in 2010,” recounts Patrik Sjögren. “Martin liked what we had done with the prototype and approved of my design ideas while adding some of his own. We provided him with steel for the first prototype, which we finished during the summer of 2011. We made a few changes for the production movements and the first two were finished just in time for the release of the Winter Nights model during BaselWorld 2013.” 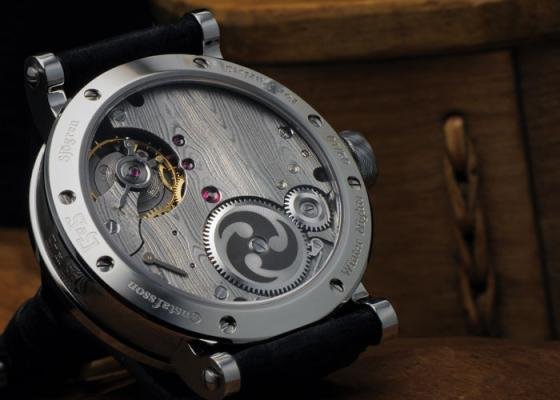 But producing the movement was only half the task, since it is a lot more time-consuming to decorate it compared with a standard watch movement. The Damascus steel is harder than both brass and nickel silver and the jewel setting is therefore more difficult. The contrast between traditional watchmaking finishes (polishing, bevelling) and the raw Damascus steel look is not easy to achieve, either. “The bridges are mirror polished before the pattern is made visible by dipping the part in hot acid,” Patrik Sjögren explains. “The acid eats away the surface of some steel types that have been forged into the patterned steel, while others are not affected as much. This means that all surfaces where tolerances must be kept also have to be protected from the acid. The finishing continues after the etching procedure to give back some brightness to the pattern and increase the contrasts in the pattern itself. The polished bevels and holes are then finalised once the Damascus steel surface is done.” It takes one week just to finish a Damascus steel bridge. 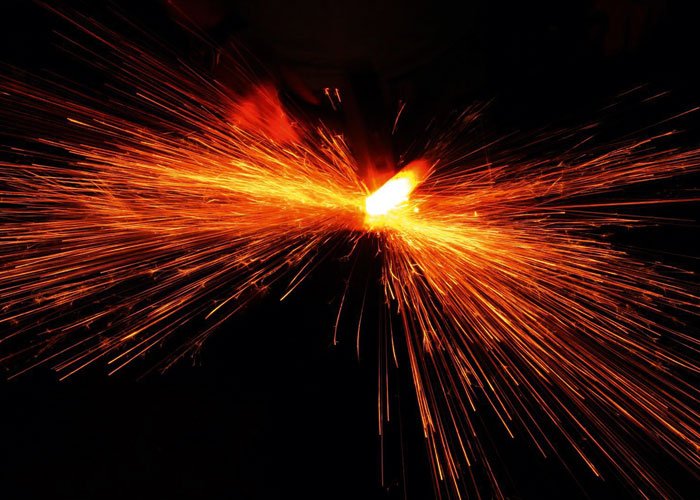 Damascus Steel
Damascus steel takes its name from the fact that European civilisation’s first encounters with such steel was during the crusades in the Middle Ages, when the crusaders first encountered the hard swords of their enemies, with their distinctive patterns. The blades were forged by bladesmiths in Damascus, Syria, from cakes of Wootz steel imported from southern and central India. Wootz is a grade of iron ore that dates back to 300 BC and was worked into steel in a crucible, burning away impurities and adding other elements. The most important ingredient in Wootz steel is carbon, which makes up 1.5 per cent of the steel by weight, compared with 0.1 per cent in wrought iron. The high carbon content is what makes Damascus steel so special, but it is also what makes it so difficult to forge. The proportions have to be just right: too little carbon results in wrought iron, which is too soft for blades; too much creates cast iron, which is too brittle.
One of the great mysteries of Damascus steel is how the secrets of its production were lost. The examples of patterned blades found in Europe in the Middle Ages, such as the Viking blades that inspired Johan Gustafsson, were produced using the pattern welding technique, in other words combining alternating layers of steel and iron, to replicate the effect of Damascus steel.

It is rare indeed for a manufacture movement to have to compete for attention with the watch’s case and dial, but this certainly applies to the pieces in the GoS watch collection. The wearer may well be able to view a superlative movement, with a unique finish and wheels polished according to Geneva Hallmark standards, through the case back. But his eyes must first overcome the attraction of the Damascus steel case and dial. Like the movement, the Damascus steel cases are also dipped in acid, but they undergo the treatment twice and are finished in between each dip. Only the visible parts of the case are exposed to the acid to ensure that the case maintains its water resistance. The dial has a beautiful “semi-symmetrical” pattern that is made up of 128 layers of high-grade folded Swedish tool steels. The only parts not in Damascus steel are the bezel and case back, whose high-gloss polished surfaces are the perfect contrast with the Damascus steel. 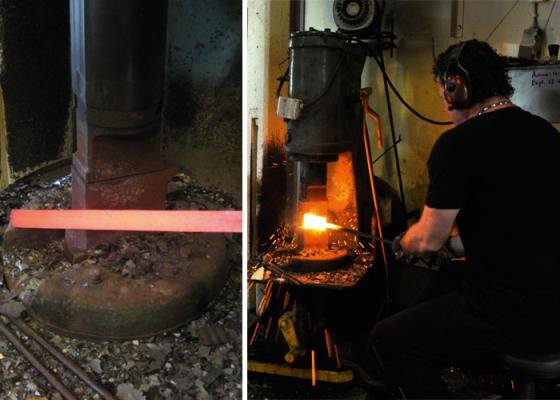 GoS have so far been selling their watches directly to end customers “on almost every continent.” But the brand’s premiere at BaselWorld this year has opened up the first contacts with retailers. “Direct sales of high end watches are difficult,” says Sjögren, “and certainly more so when you are offering something that few have seen before. Our watches need to be seen to be fully experienced. One of our goals with exhibiting at BaselWorld was to connect with high-end retailers who can show our watches to watch enthusiasts and collectors in a way that isn’t possible online.”

After following up BaselWorld with a tour of the US that brought new retailers in California and Ohio, in addition to an existing agent in Hong Kong, GoS is now looking to expand in Europe. “We think that the UK, and London in particular, would be the best retail presence for us in Europe,” says Sjögren. “I’ve always though that Germany would be a good market, too, as they appreciate Scandinavia and Scandinavian design, but the feedback from the UK has been far better.”

The main challenge for GoS will be to ensure that its production can meet the demands of its expanding retail network. The Winter Nights model will be in the brand’s authorised retailers in the US and Hong Kong from October (retail price: $25,000) and GoS are already working on a smaller 42mm model for BaselWorld 2014, which will have a Damascus steel oscillating mass.

Using only Swedish tool steels, Johan Gustafsson has been forging knife blades as a full-time bladesmith for the past 20 years. His work has won him numerous international awards and one of his major accomplishments has been the development of the technique known as mosaic Damascus steel. This allows the bladesmith to create detailed patterns that repeat throughout the material. Gustafsson achieves this by placing metal plates of different steel types into a pattern and then forging them into a single piece. He then cuts this solid piece into new bars, which he forges together again to create the repetitive patterns. 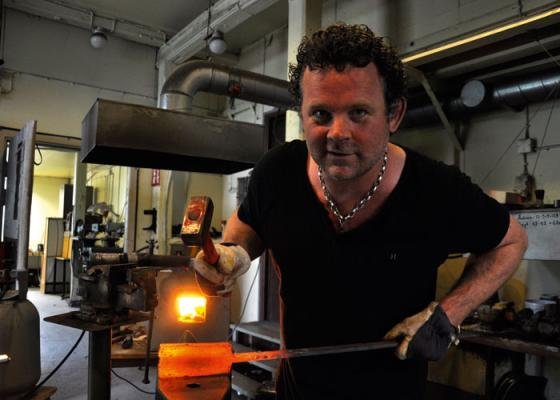 How did you learn the technique of pattern welding?I took a three-day class in basic forging and from there I have been experimenting. I decided that I wanted to make something that had never been made before, by getting colours and “crazy” designs in the steel, so there was only one way to go….By trial and error.

How much time does it take to produce a set of watch dials in Damascus steel and what are the steps involved?It is a bit difficult to say, because when I fire up the forge, I forge two to three weeks preparing for both dials and steel for knives and blades. For the dials I start with a 2.5kg billet using four different steels. I stack the steels in a 12-layer billet. I forge weld and fold this billet 10-12 times to get the amount of layers that I want. Between every forge welding I need to use an oven to slowly lower the temperature to room temperature. This is done to make the steel soft and ”workable”. When the desired layers are achieved I work the surface with different techniques, removing material (and reforging it to create the pattern) that will later show up on the dial as the design.

Is it harder to produce the dials compared with blades?Yes it is much more work to make dials! Starting with a 2.5kg billet and ending up with 5 dials at 5 grams each is a material loss of 99%! It is very important to remove all that material to get in to the core of the steel, where the most beautiful steel is.

What other items do you produce or would you like to produce in Damascus steel?I make a lot of different knives and blades. I also sometimes make pens, fishing lures and dog whistle pipes in Damascus steel. A while ago I made a fully working crossbow at 1:3 scale with a Damascus steel bow.