One of my abiding memories from last year’s SIHH was the unmistakable sound of the Roger Dubuis Excalibur Quatuor, whose four balancespring assemblies beating in unison produced a sound similar to that of a cricket, far removed from any of the usual “tictocs” of a mechanical watch operating in the single-figure hertz range. But the Quatuor was much more than just a talking piece: The first watches were delivered immediately after the show and the owners of the three pieces in silicon (retail price: 1 million Swiss francs) will be picking them up directly from the manufacture in Meyrin in December 2013.

Despite the Quatuor models taking 2,400 hours to produce and despite the hefty price tag, Roger Dubuis plans to deliver 35-40 more pieces this year, all of which have already been pre-ordered by customers. As if to reinforce the notion that this is not just a “one-shot” product, the brand now presents a resolutely technical model in black DLC treated titanium as a limited edition of 188 pieces. 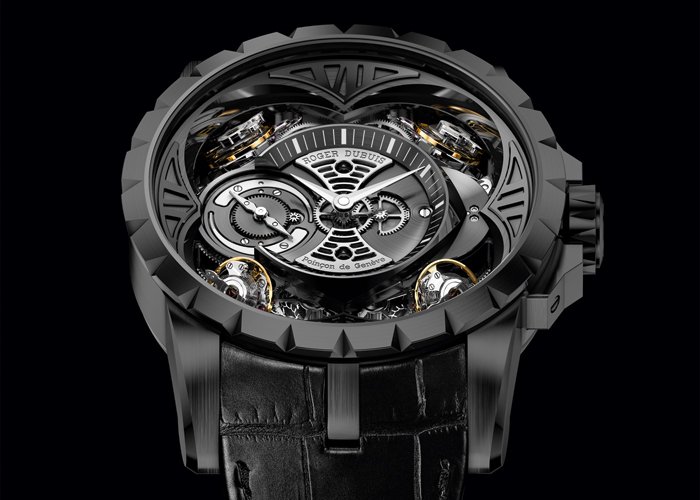 EXCALIBUR QUATUOR DLC TITANIUM
The use of DLC-coated titanium gives this highly technical piece an even more technical look. Its four balance springs are arranged at 45° angles to ensure that whenever one is in its “worst” position for isochronism, the opposing balance spring is in the optimum position. The four balance springs are connected by five differentials that average out their rate. The RD 101 calibre that powers the Excalibur Quatuor is a manually-wound movement consisting of 590 components and 113 jewels that offers a power reserve of 40 hours.

“We have largely exceeded the overall growth rate of Swiss watch exports this year.” Jean-Marc Pontroué

In addition to these healthy sales figures for its ultra-high-end pieces, Roger Dubuis also sells in excess of 500 tourbillons per year. When combined, these two figures explain why the company’s CEO, Jean-Marc Pontroué, can say that the brand is doing well. To give an idea just how well, however, he expounds: “We have largely exceeded the overall growth rate of Swiss watch exports this year. Plus we do not just sell to Chinese: we are doing well in North and South America as well as in Asia.”

Nevertheless, out of a total of 160 points of sale, Roger Dubuis has 20 own-name boutiques spread around the world and no less than six of these are in Hong Kong and Macau, which is one of the brand’s top three export destinations. An additional store will soon be added in Hong Kong and three more new stores will be opened in the Special Administrative Region (SAR) of Macau over the next 18 months. “You need to have a boutique in every casino complex,” explains Jean-Marc Pontroué, “because they do everything to keep you inside.” It is also worth noting that the watches sold by the stores in Hong Kong and Macau are almost exclusively diamond-set pieces. The brand also expects growth in other Asian markets and beyond. It will be opening its first store in Korea, in Seoul, in the near future and has already opened stores this year in Abu Dhabi and, more recently, in Moscow in November.

After Roger Dubuis the master-watchmaker launched his eponymous brand in 1995 with a “Hommage” model dedicated to generations of watchmakers who have kept the tradition of mechanical watchmaking alive, it is now the turn of Roger Dubuis the brand to pay tribute to its founder with a very special “Hommage” piece. The “Hommage Tribute to Mr. Roger Dubuis” is inspired by a model that dates back to 2003 and features the flying tourbillon, big date and power reserve from the RD540 calibre movement in a pink-gold case.

Production of this piece will be limited to 208, which was Roger Dubuis’s registration number at watchmaking school. The tribute model is one of four limited editions in a collection of ten new Hommage references that will be presented at the SIHH 2014, of which five will be self-winding (look out for the new RD 820 calibre self-winding movement with a microrotor) or chronographs and five will have other complications.

The chronograph pays its own tribute to watchmaking crafts with a sunray pattern engine-turned dial that can take up to 50 minutes to produce – just one of several layers on the dial that include snailed symmetrical chronograph counters, applied oversized Roman numerals and a minute scale on the flange. Only when Roger Dubuis unveils its SIHH booth at 9.30am on 20 January 2014 will the full collection be seen for the first time. This unveiling once again promises to be an event in itself. After the presence of a huge eagle dominating last year’s booth (the emblem from the Geneva flag was a powerful reminder that all the brand’s timepieces are produced to the standards of the Geneva hallmark) and the occasional appearance of examples of this magnificent bird of prey in the flesh, Roger Dubuis will present an entirely new booth for the 2014 edition of the show to honour the Hommage collection. The brand promises us a tribute to traditional watchmaking seen from a modern viewpoint, combining the beauty of mechanics with the “organic creativity inspired by the postindustrial era and steampunk.” 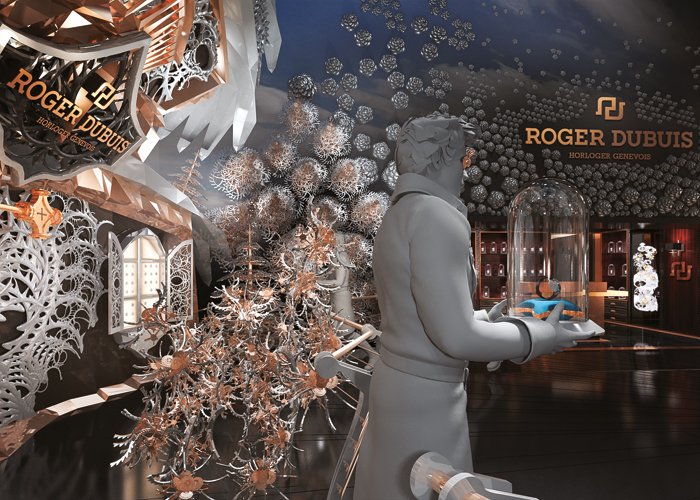 Roger Dubuis is traditionally the first SIHH exhibitor to give a preview of selected models in its 2014 collection. But the brand went a step further by revealing a highly ambitious project for 2015: tailor-made timepieces. As Jean-Marc Pontroué explains, “Price is not one of the factors considered in the decision to purchase a Roger Dubuis timepiece. Customers do not want the standard version, they want something different, something unique. However, they are ready to spend but not to wait.” The challenge for the brand is therefore to channel this pent-up demand into a whole new area of watchmaking, in which customers can customise every aspect of their timepiece (including the movement) and have the watch ready by a deadline that will satisfy their patience. 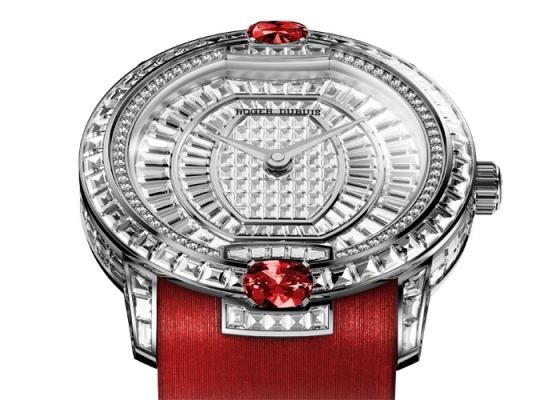 The perfect complement to the technicality of Roger Dubuis’s bestselling skeletonised tourbillons, the Velvet Haute Joaillerie eloquently illustrates the skill of stone setting with three different diamond cuts (cushion, baguette and emerald) and three different types of setting (invisible, claw and “Clou de Paris”). The case and dial are set with 304 diamonds, for a total of approximately 11.13 carats, the folding clasp for the red satin strap is set with a further 30 diamonds totalling approximately 0.75 carats and the veritable pièces de résistance come as two specially-cut 0.52 carat cushion rubies at 12 o’clock and 6 o’clock. This sublime fully-paved piece is powered by the RD 821 calibre selfwinding movement, which offers a 48-hour power reserve. It is available exclusively on request from Roger Dubuis boutiques.