In 2014, the Greubel Forsey manufacture officially celebrates 10 years of existence but Robert Greubel and Stephen Forsey have been working together for around 15 years. The two watchmakers thus took five years to meticulously hone their concept before setting up their company. This is not surprising, given the extreme rigour with which these two watchmakers have conceived their creation and planned its progressive development. Nevertheless, as they themselves admit, “nothing had been decided in advance but we were profoundly inspired.”

Their inspiration? As deeply knowledgeable and fine connoisseurs of classic watchmaking who rejected the “typically postmodern” notion that everything had already been accomplished in this mechanical art, they first set about improving the performance of classic tourbillons, even going as far as revolutionising their operation.

A PIPELINE OF INVENTIONS

Methodically and scientifically, Robert Greubel and Stephen Forsey have established a process of invention that they call Experimental Watch Techonology (EWT), which is a highly rigorous “platform” for theoretical reflection, research, study and experimentation from which the majority of their mechanical inventions have come.

Methodically and scientifically, Robert Greubel and Stephen Forsey have established a process of invention that they call Experimental Watch Techonology, which is a highly rigorous “platform” for theoretical reflection, research, study and experimentation. 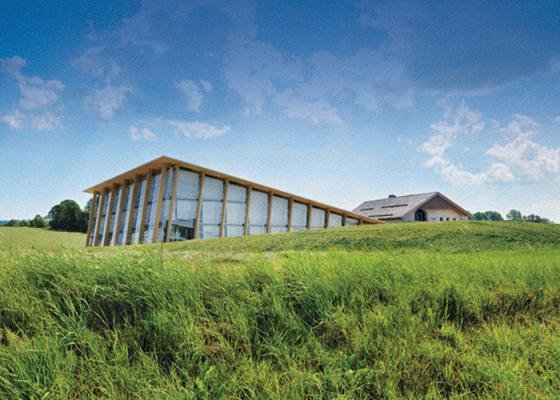 Their first invention, the Double Tourbillon 30°, is the perfect example of how effective this process is. It starts with an “inspiration”, in the form of an intuition: what if we inclined the tourbillon cage to improve the average rate? Four years were needed to implement what was originally only a hunch and to arrive at a novel solution: inside a cage that rotates once every four minutes there is a smaller cage, containing the sprung balance, inclined at 30 degrees, that rotates once every 60 seconds. This combination of inclination and different speeds of rotation cancels out the differences in rate due to the Earth’s gravity in all positions of the wristwatch. In 2011, this new configuration won first prize in the International Chronometry Competition in Le Locle. After this first invention, five other novel ideas from the EWT pipeline were gradually presented (and continue to be presented): those fully implemented are the Quadruple Tourbillon, which couples four tourbillons to a differential to achieve even greater precision, and the Tourbillon 24 secondes, which rotates three times faster than a normal tourbillon; still at the prototype stage, the Balancier Spiral Binôme, characterised by its synthetic diamond balance spring, which aims to improve the performance of the regulating organ, as well as the Différentiel d’Egalité, which aims to “even out the driving power before distributing it in a constant way to the regulating organ” are now coming out of the EWT process; still in the starting blocks, the Double Balancier, which, for the first time, takes the research away from the tourbillon by aiming to improve the average rate using two regulating organs.

FROM HIGH-TECH TO HIGH AESTHETICS

The resounding success of Greubel Forsey would not have been the same if the researchers had contented themselves with a “simple” implementation of their technical intuitions. What is quite unusual in their approach is that it is this very technical creativity that has in a way constrained them to think about new aesthetic approaches. Because they believe that “technology and architecture are Siamese twins”. 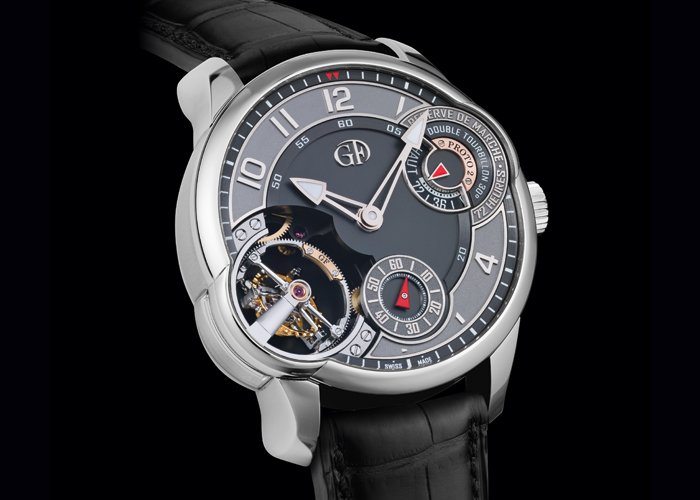 GREUBEL FORSEY DOUBLE TOURBILLON ASYMETRIQUE
A new interpretation of the Double Tourbillon 30° in an asymmetric case. 6 pieces in white gold. Greubel Forsey launched the Double Tourbillon 30° Vision in 2004. A decade later, this new interpretation features an asymmetric positioning of the Double Tourbillon 30° which has only previously been presented symmetrically in the collection. To achieve this, the movement architecture has been completely reconstructed, with the outer cage of the patented Double Tourbillon 30° inversed. However, the one-minute rotation of the inner tourbillon cage and the four-minute rotation of the outer tourbillon cage remain the same. The movement is housed in a 43.5 mm diameter case with a curved lateral window in the case band at 8 o’clock. This three-dimensional opening offers the observer a very special view of the double tourbillon system, showcasing the complexity and aesthetic qualities of this unique complication. The black treatment of the mainplates, forming the backdrop for the tourbillion system, accentuates the three-dimensionality and depth of the double cages, which are composed of no less than 130 components. The polished conical arm and the flat black polish of the steel tourbillon bridge is one example of Greubel Forsey’s signature superlative hand finishing. The power reserve indicator at 2 o’clock features an innovative rotating disk displaying optimal remaining running time by means of a fixed red triangle instead of a conventional hand. 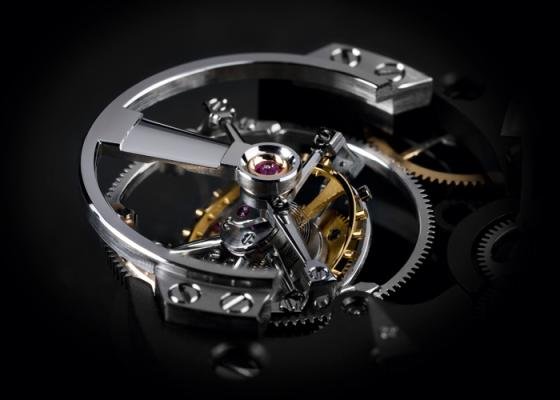 The same invention, as in the case of the Double Tourbillon 30° for example, can therefore be redesigned repeatedly, its components reordered in space in accordance with an architecture chosen to show it off. This architectural work, carried out in depth in three dimensions (and far removed from the simple pairing of dial and movement), “forced” them, we could say, to use a level of care and attention to the aesthetics of their components and their finishing that is frankly astonishing. There is a certain craziness (and this is reflected in the price of the timepieces) from wanting to push as far as they do the perfection of decoration and finishing of the least significant and most hidden components in the watch. Two numbers tell you all you need to know: Greubel Forsey has almost 100 employees to produce… 100 watches per year! “Maybe one day we will manage to produce 120…”, Stephen Forsey ventures timidly, “but each new piece takes us further in our research, production and finishing…”.

These one hundred employees (which includes Compli-Time, a sister company specialised in developing complications for third parties) have been grouped together since 2009 in a “home” that perfectly expresses the spirit of invention that is deeply anchored in the tradition of fine watchmaking that drives our two watchmakers. From the base of a splendid 17th century farm that has been magnificently restored – the “roots” – the “wings” literally sprout from the ground in the form of a sloped glass-fronted building (I swear it is at 30°) composed of metal and wood that houses all the work shops. Arranged over three floors around a vast and luminous patio, these workshops are spacious, ordered, comfortable and warm, whether they be the machining or profile turning workshops, the laboratories, construction offices or decoration, assembly and casing-up workbenches.

Around 70 per cent of components are produced in-house on this site. Given that each new creation requires 80 per cent of components to be completely new – including pinions and, therefore, gear trains – and the modest number of watches produced each year, we can easily deduce that everything is geared towards meeting the specific (and costly, when consistently perfect quality is needed) requirements of small series.

The resounding success of Greubel Forsey would not have been the same if the researchers had contented themselves with a “simple” implementation of their technical intuitions. What is quite unusual in their approach is that it is this very technical creativity that has in a way constrained them to think about new aesthetic approaches.

These quality requirements have a whole series of consequences, in particular in terms of responsibilities. Far removed from assembly line work, the machine operators (six CNC technicians for seven machines, two profile-turners for four machines), the artisans employed for decoration (14 people who spend an average of 300 to 350 hours decorating each timepiece) and the 12 watchmakers who work on assembly (each movement is fully assembled a first time, tested, disassembled, revised if necessary, assembled a second time with its terminal screws, then tested again before being cased up and tested for a third time), are all responsible for their piece from A to Z. The importance attached to the laboratory and tests is another good example of the level of quality being targeted. The laboratory, with a staff of six, is almost over-equipped: magnetic fields, shocks, temperature extremes and materials science are their daily bread. In permanent communication with the laboratory, the three movement constructors and technical and aesthetic prototypists subject their prototypes to a simulated 10 years of wear and tear. “You need to spend a lot, in terms of energy and resources, to make an object produced in small series as equally – if not more – reliable than a mass-produced item,” stresses Stephen Forsey. 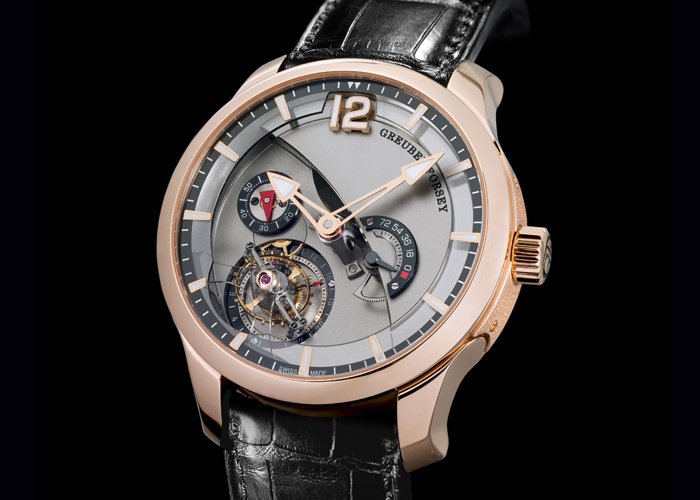 The aim is, of course, to ensure that the object, which is produced in a process where the role of the craftsman’s touch is essential, will last. But will the clientele, which is mainly – but not exclusively – wealthy connoisseurs of fine watchmaking (because the more you know about great mechanical watchmaking, the more you will be able to fully appreciate the veritable break in the continuity of a tradition that Greubel Forsey brings) also last?

“In ten years of existence, we have seen our customer base get younger, from an average of 60 years old to around 40 years today. This reassures us about our own future,” Stephen Forsey admits with a smile.