Could this be the year of the practical complication? In addition to some ingenious interpretations of astronomical themes (see Pierre Maillard’s article in this issue), there seemed to be a focus on making the familiar top-of-the-range complications more practical.

ULTRA-THIN FROM JAEGER-LECOULTRE Perhaps the most accomplished example is Jaeger-LeCoultre’s Ultra Thin Minute Repeater Flying Tourbillon. Despite adding the flying tourbillon to what is already an extremely complicated piece, the brand from the Vallée de Joux proclaims that this model is the slimmest minute repeater watch ever made, with a total thickness of 7.9mm and a movement that is less than 4.8mm thick. It is the first ultra-thin Grand Complication model from Jaeger-LeCoultre and the eleventh creation in its Hybris Mechanica collection. 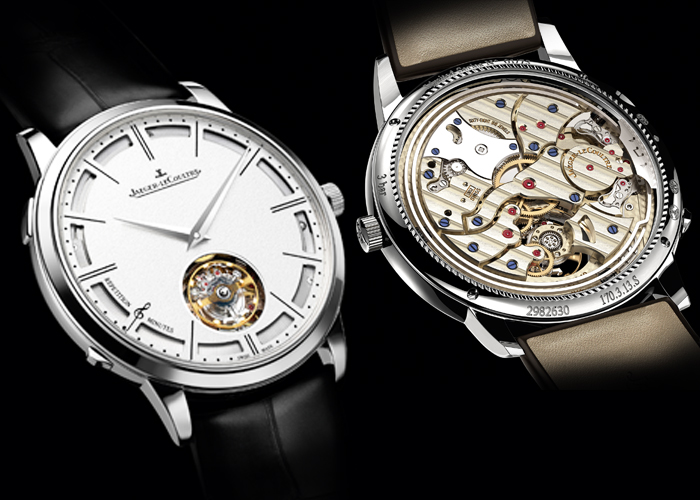 Two innovations have been combined to reduce the thickness of this watch: firstly, it is not just the tourbillon but also the balance wheel that is “flying”, since the balance wheel is positioned above the tourbillon and has no upper bridge (a configuration similar to the new Exotourbillon model that Montblanc presented at this year’s SIHH); secondly, a peripheral self-winding system is used, with a platinum segment visible through apertures in the dial that rotates around the movement to wind the watch. Furthermore, the new pushbutton used to activate the minute-repeater, rather than the usual slider, activates a system that hides a number of very significant innovations. Jaeger-LeCoultre’s “silent time lapse reduction system” eradicates any gaps in the striking in the absence of a quarter gong. Thus at 8.12 there is a seamless transition between the eight strikes on the hour gong and the 12 strikes on the minute gong. The brand’s patented catapult striking system also ensures a cleaner strike with greater energy on gongs that have a square, rather than circular, cross section, which gives a greater strength to the sound because there is a greater surface area in contact with the hammer. Most important of all is the fact that you can activate the minute-repeater mechanism again as soon as it has stopped – in a traditional minute-repeater watch doing so would break the mechanism.

OVERSIZED FROM PARMIGIANI FLEURIER Since a minute-repeater alone no longer seems sufficient to impress, Parmigiani’s new Toric Resonance 3 model also lays claim to a record. This 655,000 US dollar piece has the largest instantaneous jumping date ever manufactured, which brings its own further complications. Since the two date discs are the same size as the dial, they require a substantial amount of force to both trigger the instantaneous date jump at midnight and then immediately stop the discs. This force is managed by a double cam system in which one cam continuously arms the spring lever for the date jump while another controls a spring-mounted lever to stop the discs. 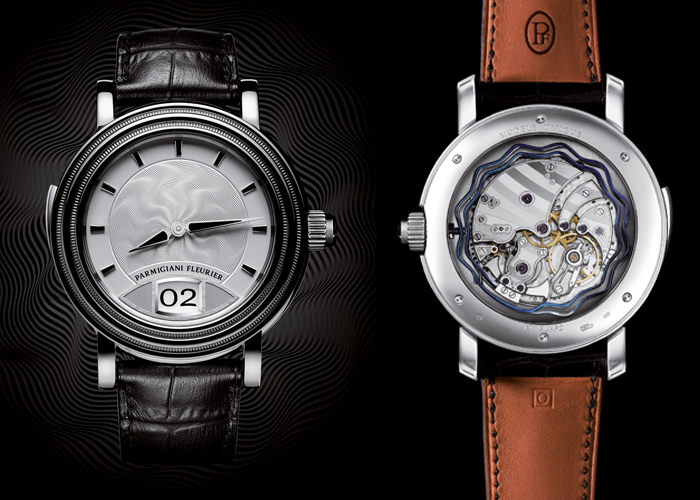 The sublime 18-carat white gold dial, with black lacquered hour markers and black lacquered delta-shaped hands, has an exquisite hand-guilloché central section and its sober appearance belies an extraordinary attention to detail that includes a redesigned logo, whose curves are adapted to the shape of the dial, and unique individual numbers on both date discs (in other words, the 1, 2 and 3 numerals that are common to the tens and the units on the two different discs are not identical). Similar care is lavished on the PF359 hand-wound movement, for which Parmigiani Fleurier simply describes the finishing as “absolute”.

THREE-DIMENSIONAL FROM CARTIER Cartier’s 2014 crop of fine watchmaking models includes no less than four new tourbillons, of which two in the brand’s Rotonde case are particularly noteworthy. Pierre Maillard covers the Rotonde de Cartier Earth and Moon watch in his article about astronomical complications in this issue, while the Rotonde de Cartier Astrocalendaire offers a new interpretation of the perpetual calendar that we will take a closer look at here. 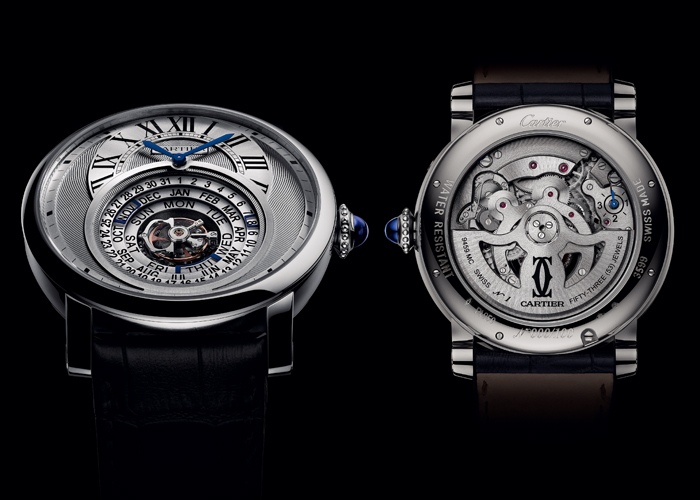 The design of the new Astrocalendaire piece automatically draws the eye to the flying tourbillon, located almost at the centre of the dial, around the circumference of which the new three-dimensional perpetual calendar indications are displayed on separate bridges. The desire to move away from the typical linear display of the day and month indications, or the use of subdials, also opened up new technical possibilities for the movement. In fact, instead of using the traditional system of stars, levers and springs for operating the date displays, Cartier has designed a system of gear trains with a special “brain” wheel (for which the brand has filed a patent) that uses a cam to push out three flexible teeth to cope with the different lengths of the months. A further advantage of this calibre 9459MC movement, which is finished to the standards of the Geneva Hallmark, is that the date can be corrected at any time without any fear of breaking the mechanism. All this can be done using the crown (with the exception of the day, which can be corrected using a separate pusher at 2 o’clock on the case).

It’s refreshing to see that the research carried out by these brands is not just focused on producing complications for complications’ sake but on adding a genuine practical value for the watch aficionado. Long may it continue!