Armand Nicolet traces its origins back to 1875, when a certain Armand Nicolet, the son of a watchmaker, set up his own workshop in Tramelan in the Swiss Jura region. After his death in 1939, his son Willy took over the company and developed it into a major producer of watch movements as Tramelan gradually became one of the top three places in Switzerland in movement production in the 1950s. 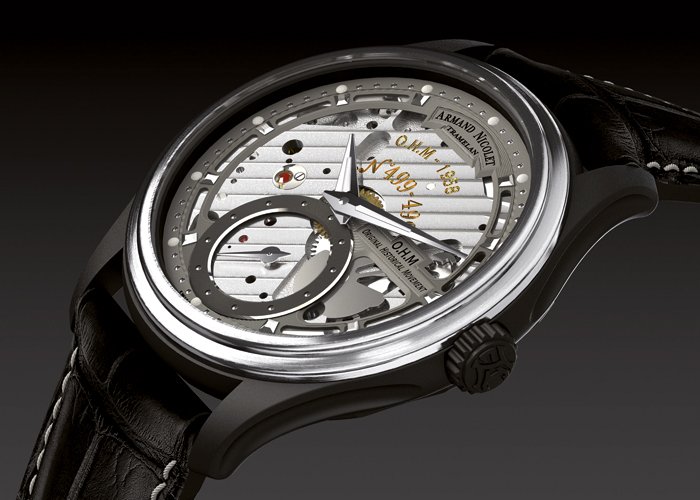 In a story similar to that of Auguste Reymond (see the separate article in this issue), Armand Nicolet survived the devastation of the quartz crisis but emerged as a different operation, assembling watches on a much smaller scale and relying on its existing stocks of proprietary movements. But in 1987 Willy Nicolet met Rolando Braga, an Italian entrepreneur, who injected the Italian design into the collection, which was presented anew at BaselWorld in 2000.

The brand’s limited-edition OHM collections (OHM meaning “Original Historical Movements”) feature vintage movements, including the famous Venus calibres produced by the company, that undergo extensive “tuning” to meet modern day aesthetic requirements and are decorated accordingly. The movements are therefore disassembled, catalogued, converted into 3D renderings on computer in order to plan technical improvements (the addition of Incabloc shock absorbers, for example) and decoration, then the individual components are refined and decorated before the movement is re-assembled by hand. 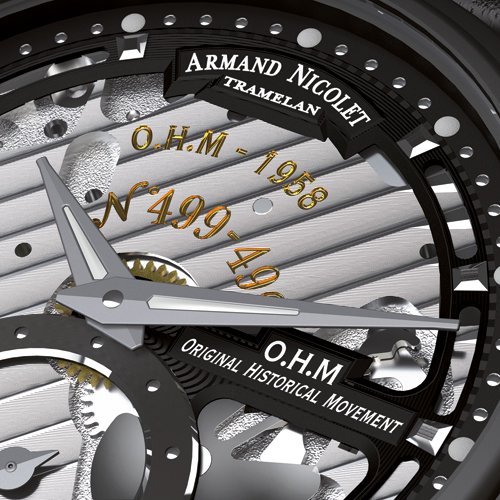 L14 is the latest model in this OHM collection and it uses a reworked version of the UT 600 calibre from 1958. This hand-wound movement operates at 18,000 vibrations per hour and offers 36 hours of power reserve. It is partially visible through a grey open-worked dial and can be admired in full through a transparent sapphire crystal case back. The technical look of the dial is framed by a black DLC-coated stainless-steel case with a matching black alligator leather strap with black DLC-coated steel buckle. These collections are necessarily limited by the availability of the historical movements used in them. In the case of the new L14 this number is a convenient 499 and the individual number is engraved on to the back side of the mainplate, together with the year the original movement was produced, so that it is clearly visible on the dial.