NEWCOMER - BARBOUR: From the waxed jacket to the wrist


NEWCOMER - BARBOUR: From the waxed jacket to the wrist

Quintessential British brand Barbour has been family owned through five generations and to this day is based in South Shields on the north eastern coast of England. It is thanks to this location, which was a booming port when John Barbour established his company in 1894, that Barbour has such a reputation for two unique types of clothing, both of which evolved from John Barbour’s trade in oilskins for the sailors departing from the port. The first is the waxed jacket, with its unique waxed cotton finish, that has been the staple garment of Britain’s hunters for decades. The second, known under the Barbour International brand, is the oiled cotton suit introduced by Duncan Barbour, of the third generation of the family, which became a hit among motorcyclists and was worn by virtually every single British International Six Day Trials team from 1936 to 1977, when the company ceased their production.

With these two iconic garments as a foundation, Barbour has grown into a genuine lifestyle brand, adding a range of shirts, footwear and accessories to its extensive range of jackets for ladies and gents, which are sold in over 40 countries worldwide, from the United Kingdom as far afield as Japan. Building on its 120-year history, Barbour now launches a range of timepieces under the Barbour and Barbour International brands at BaselWorld 2014 that will be designed, marketed and distributed by UK-based Zeon Ltd., which is a wholly-owned subsidiary of the Hong Kong-based Herald Group. 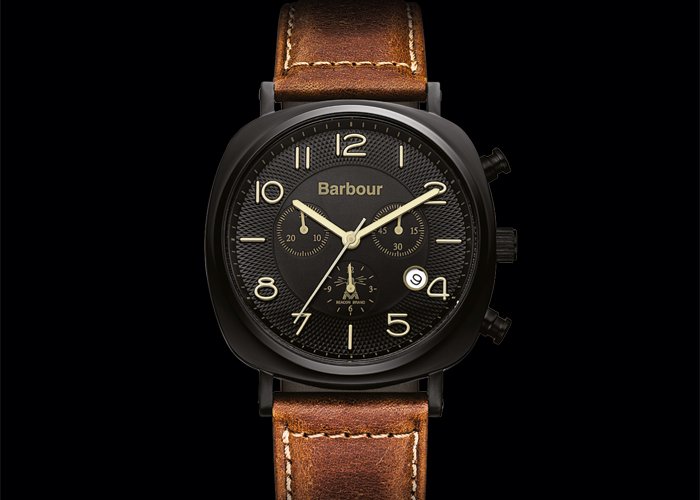 “Barbour is known across the world for its iconic clothing, accessories and footwear,” says David Godfrey, Barbour’s Global Licensing Manager. “Developing a collection of watches is a natural evolution in our brand extension as we work towards our goal of becoming the best British lifestyle brand worldwide. The watches we have developed with Zeon are smart, contemporary classics that include features which are unique to Barbour such as our exclusive tartans and Barbour studs.”

Although the collection includes Swiss Made movements, Richard Tibber, Managing Director of Zeon, is keen to point out that the collections will be “totally designed in Britain” and will feature exclusive straps crafted from rugged quilted leathers.

You can see the new Barbour and Barbour International timepiece collections at BaselWorld on Zeon’s stand in Hall 2.0, Stand A51, along with the company’s other brands: Ingersoll, Bench, Braun, Penguin, Paul’s Boutique and Vivienne Westwood.