Several years ago, Bell & Ross made its first foray into custom motorcycles as marketing tools when they teamed with Shaw Harley-Davidson in the UK to build the “Nescafe Racer”. The bike featured Bell & Ross graphics and a BR-01 watch mounted in the fuel tank. Raising the profile of Bell & Ross among a new clientele, and helping Shaw Harley-Davidson at the same time, the motorcycle toured the world, entering custom bike contests and appearing at watch events (you might remember that it was on display in the Bell & Ross booth in 2012). It even won several custom motorcycle shows and got a tonne of press, especially in mainstream magazines, blogs and websites. 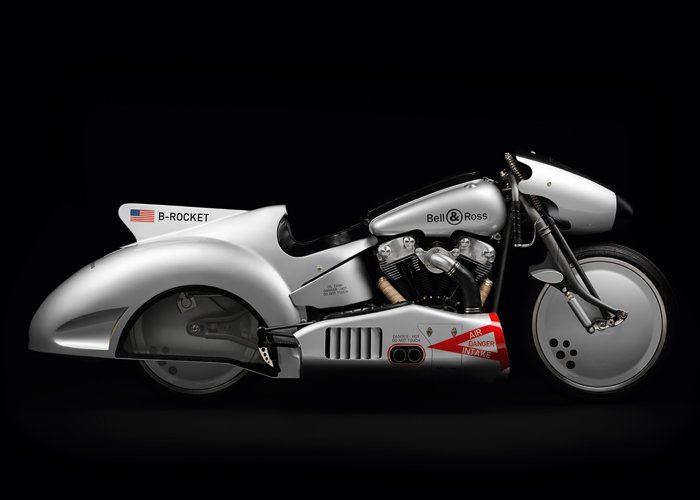 This year, Bell & Ross and Shaw have teamed up again with a clean sheet project, a motorcycle and watch inspired by the “Right Stuff” era of the ‘60s and ‘70s. “We decided to do another project together, developing a special bike inspired by the Bell & Ross universe,” explains Bruno Bellamich, the designer manager of Bell & Ross. “The name of the bike is the B-Rocket – we wanted to design a bike like a plane. The lines of the bike are inspired by aerodynamics, speed bikes and planes from the ‘60s – it’s a neo retro concept. For planes, the most mythical period is the ‘60s and ‘70s, with all those experimental planes and radical concepts. It’s a timeless instant – you don’t even understand what it is – is it a future concept or a different planet? This era expresses innovation and man’s intelligence.” 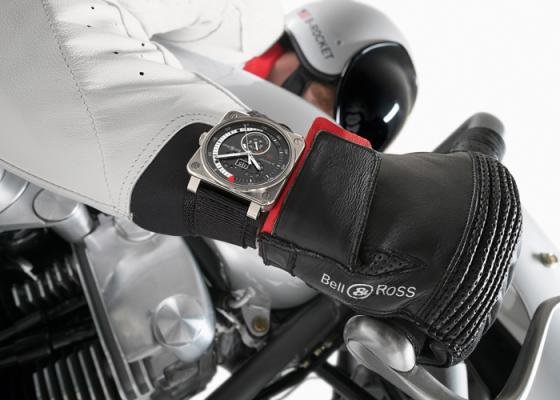 For Shaw Speed & Custom, the goal of the B-Rocket was to build something unique, something stimulating to the eye, and to be able to show it to the motorcycle media and the motorcycle community and have them understand what it was built for. “It is a straight line bike, airplane meets motorcycle,” says Steven C. Willis, Team Principal, Shaw Speed & Custom. “I wanted it credited for the engineering rather than just being a bike that someone put their brand name on. We wanted it understood in the biking world - I wanted to make sure everything we did was backed up by mechanical works.”

Unlike the first collaboration, this project also includes matching timepieces that share the same inspiration as the B-Rocket motorcycle. “The bike came first, and the watch is a piece of the bike,” says Bellamich. “In the bike, there is a counter and the graphic design of the counter is designed by us, and the watch is inspired by the outside of the bike and the counter.”

The bike is gorgeous, evocative of the era of the daredevil test pilots, fast airplanes and pushing every envelope available. Built for the straight line of the Bonneville Salt Flats, the motorcycle looks fast just standing still. The motorcycle used the Harley-Davidson Softail Blackline FXS as a base, but everything was modified for the B-Rocket – the bike looks like nothing else that has come before it. Streamlined and aerodynamic, the B-Rocket is meant to go fast – using a jet-looking nose cone, a cabin protecting the pilot from the wind blast, the twin turbines and the fin at the back. The 1,584 cm V-Twin engine has a custom exhaust system that sounds, in a word, awesome.

“I love that we have captured this era of the 1960s and 1970s,” says Willis. “It was an exciting project in that we had to unlearn everything we knew and develop a bike as if we were standing in that era. The most exciting part for me is when the frame has the wheels and the engine in it, and it comes to life. I love working with the Bell & Ross brand. The first bike was pretty sensational for both of us and to beat that was always the task, and I think we’ve done that with the B-Rocket.”

In companion with the B-Rocket motorcycle, Bell & Ross is launching two new B-Rocket inspired watches at BaselWorld; the BR01 B-Rocket (at 46mm) and the BR03 B-Rocket (42mm). The BR01 version is a chronograph with tachymeter scale and three, uniquely designed counters. The BR03 model has a large date window and a power-reserve indicator. The padded leather of the straps is directly inspired by the bike’s cushioning, where the rider lies almost completely prone to pilot the bike.

“I like how the watch fits into the overall design mission,” says Bellamich. “It’s the perfect mix between the plane and the bike. When you see it, you know it is a part of the concept.”

“The motorcycle will travel around the world to special events, exhibitions, shops, to show our customers what can be done, to allow them to dream,” says Bellamich. “What I like in this concept is that it’s not just putting our logo on the bike or a car, it’s the demonstration of our creativity applied to a motorcycle. It’s evident when you see the bike – you see the motorcycle, the plane and the Bell & Ross watch.

“This motorcycle and the watches are a window onto our know-how and it really helps us develop brand awareness,” he continues. “We will get a lot of exposure. To be completely honest, more people know Harley-Davidson and bikes than know Bell & Ross.”

You can expect to see the motorcycle and the watches in the Bell & Ross booth at the BaselWorld show (Hall 1, A33). Ask them to fire up the B-Rocket so you can hear the engine roar!