MID-RANGE - EMILE CHOURIET, a new manufacture on the horizon?

MID-RANGE - EMILE CHOURIET, a new manufacture on the horizon?

Emile Chouriet, owned by Fiyta of China (which produces close to a million watches per year), presents a talking piece as the standard-bearer for its 2014 collection in the form of a sublime moonphase model with a case that features the distinctive winged lugs that are a hallmark of the brand. The classic elegance of the piece reminds us that China, and the classic tastes of its consumers, is the main market for Emile Chouriet.

The moonphase module for this new model was developed in-house at the brand and functions using two sapphire discs, one that is metallised blue and fixed to an aluminium disc with inner asymmetric toothing and has a large mother-of-pearl moon and stuck to it, and another disc positioned above it that bears the Roman numerals and a darkened circle between 3 and 6 o’clock that hides the moon as it moves around the dial, thus indicating the phase of the moon. The complication module is fitted to an ETA 2892 base movement in a stainless-steel case and sells for a surprisingly reasonable 3,564 Swiss francs, mainly because the brand’s prices are benchmarked to those in the Chinese market. 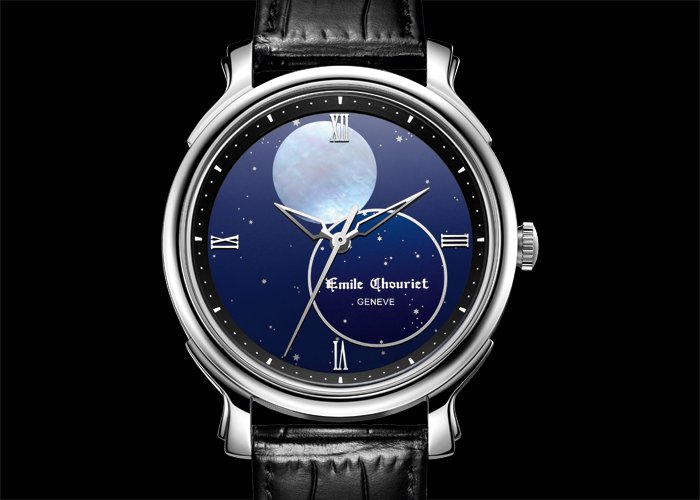 Emile Chouriet had a good year in 2013 despite the slow-down in its main market, as Jean Depéry, CEO of the company, told Europa Star. “We did feel the impact of the slow-down but it was less than we thought it would be. But it’s a good thing anyway, because things were getting crazy. We had quadrupled production in four years.” The brand still expects a respectable 10 per cent growth in 2014 and hopes to open up new markets after gaining a foothold in Switzerland with 12 points of sale last year to follow the Chinese tourists. “We are a Swiss brand after all, so Chinese tourists expect to find the brand when they visit Switzerland,” explains Depéry.

Expansion into further markets is limited not by the brand’s production but the availability of Swiss Made movements, especially since the proportion of quartz movements in the collection has dropped from 45 per cent just a few years ago to only 20 per cent today. “We want to expand further but we have to supply the Chinese market before we consider other markets and to do this we would need more movements,” says Mr Depéry. “We will continue to look for alternative suppliers, and some are now emerging, but this does not stop us looking into producing our own movement. But if we did so it would be a manufacture movement at a higher level.”

Such a new movement would take at least two years to develop and would therefore not be on the market before 2016. But in the meantime the brand presented some other interesting new models at BaselWorld, including its first dedicated line for ladies’ (the existing collections are derivatives of gents’ watches) and the first divers’ watch in the collection.