From day one, just over ten years ago, DeWitt watches were imbued with an inspired personality, a bold, architecturally structured appearance that made them not only stand out handsomely on the wrist, but also be conspicuous within an industry that boasts some of the most original mechanical designs created by man. To this, Jérôme de Witt the founder of the company, has slowly developed the technical know-how and innovative complications for the brand’s watches to place them in a niche of their own whilst striving determinedly to develop a true manufacture. Today, with the introduction of its own in-house automatic movement, conceptualised and constructed one-hundred per cent in-house and the promise of a chronograph and an intriguing perpetual calendar to come, DeWitt will have achieved the autonomy and security that not many independent watch companies possess.

IMPERIAL INNOVATION Being a relatively small company by choice, DeWitt produces timepieces in small quantities or Limited Editions – between 1,500 and 2,000 a year - that gives them an added value, but we’re not talking about simple hours and minutes creations, we’re talking about horological complications that collectors and connoisseurs revere: the Perpetual Calendar Nebula, an Academia Tourbillon Differential, Twenty-8-Eight Regulator ASW Horizons, the Tourbillon Force Constante, the Twenty-8-Eight Tourbillon – the brand’s first entirely in-house tourbillon movement - and the latest Twenty-8-Eight Tourbillon Prestige which is assembled by a single watchmaker and carries his signature on the movement which is visible through the timepiece’s caseback. 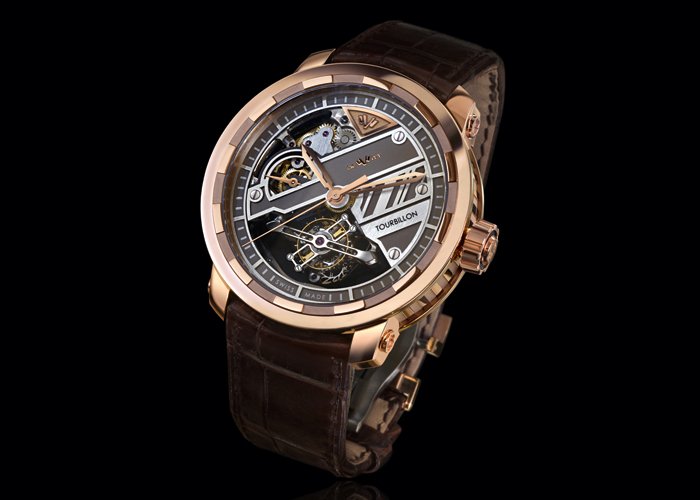 The Calibre DW8014 is another remarkable creation, an automatic tourbillon with a dead-seconds complication and a 72-hour power reserve. One of the fascinating innovations is that there is no visible rotor to impede one’s observation of the movement since an Automatic Sequential Winding system (ASW) uses a peripheral rotor assembly whereby the oscillating mass converts the circular motion of the peripheral rotor, via a ruby-rocker system, into the piston-like movement necessary to wind the mainspring. A tourbillon is particularly susceptible to variations in torque as the mainspring runs down because of the extra load the tourbillon puts on the going train. The ASW system however, overcomes this via a special clutch mechanism that disengages the mainspring when it reaches 96 per cent of its maximum torque and re-engages when it drops below 92 per cent, thus the energy reaching the escapement is always ideally primed for optimum timekeeping. The dead-seconds mechanism is also another interesting complication since the seconds hand moves once a second and not each time the escapement unlocks. In the Calibre DW8014, the dead-seconds complication is driven by the tourbillon carriage thus reducing the energy required to operate the complication to a minimum.

A STYLISH MOONPHASE One of the latest additions to the DeWitt collection is the Twenty-8-Eight Full Moon. This eye-catching timepiece has a 43mm titanium case incorporating the brand’s imperial columns and is equipped with an automatic movement vibrating at 28,800 with a 42-hour power reserve. A partial skeleton silver dial reveals the gold colour tone of the two gear wheels and makes a stunning contrast to the celestial infinity represented by two Goldfluss plaques (a gold flecked blue aventurine or synthetic glass, produced with copper and a special firing method using a very ancient process that dates back to twelfth century Venice). 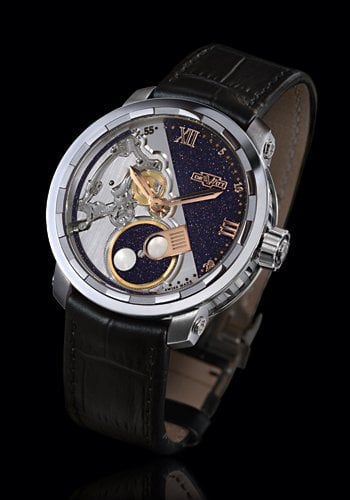 The moon phase module, manufactured in-house, is positioned in the lower part of the dial. The moon, which symbolizes the cycle of life, is presented here in white mother-of-pearl appearing and disappearing as the days pass through an appliqué rose gold-coloured aperture and the moon phase function with its two moons offers a unique interpretation of the cycles of life. Rose gold coloured Roman and Arabic numerals add subtlety and poetry to the reading of time.

POETRY IN MOTION Another original this year is the Twenty-8-Eight Double Time GMT2 Poetic. Equipped with a self-winding mechanical movement with a power reserve of 42 hours, it has three complications: date, GMT, and day/night indicator for the second time zone. The 43 mm round titanium case enjoys the 24 traditional DeWitt imperial columns and the in-house produced dial has a rosette pattern with various decorations: sunray brushing, beige mother of pearl half-moons, and Arabic and pink gold appliqué Roman and Arabic numerals. The upper section of the dial has an aperture at 12 o’clock, where the sun’s rays emerge at dawn and fade at dusk, and the second time zone is represented by a small hollow sword-shaped red hand. 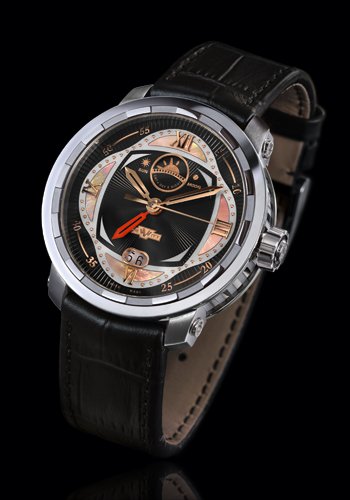 Finally, a brief mention of two of last year’s successes. The Classic Quantième, a 40 mm rose gold watch with hours, minutes and seconds indications with days of the week in the aperture at 11 o’clock, months at 1 o’clock and the date via a central hand; the Classic Jumping Hour in a 40 mm rose gold case with the hour indicated by a disk appearing through a large aperture at 9 o’clock and the minutes and seconds in two separate but intersecting off-centre dials. The hour change occurs instantaneously by a jump every 60 minutes. The dials are available in black, white and blue, enhanced by the contrast of the rose gold colour-tone appliqué with the radiating reflections of the background.

Because of the horological demands of building some of their multi-complication timepieces, DeWitt entrusts the work to a single watchmaker using the phrase One Man – One Watch – One Year. With their mechanical complexity, their majesty and their rarity, the addition of One Owner would not be out of place.