The Grandmaster Chime is not the only timepiece of note launched by the Genevan manufacture on its 175th anniversary. Here is a selection of new watches deserving of equal attention from watchmaking aficionados.

“My father told me he was handing over the family business to me for the next twenty-five years. I’m hoping the adventure will last quite a bit longer than that!In fact, we have already started thinking about pieces for our 200th anniversary.” For Patek Philippe president Thierry Stern, the bicentennial celebration doesn’t seem all that far away.

Previous Celebrations
1989: The Calibre 89 for the company’s 150th anniversary
1996: Limited editions for the inauguration of the Plan-les-Ouates manufacture
2000: The Star Calibre 2000 to welcome the new millennium

Amid the constant stream of anniversaries of all kinds, of which numerous watchmaking brands, quite appropriately obsessed with the passage of time, have made a fetish, Patek Philippe’s celebrations have a special flavour all their own.Firstly because, with its long history, the Geneva manufacture has the modesty and good taste to mark only the passage of generations. And also because, as a result of its watchmaking abilities, Patek Philippe has accustomed us to expect only truly outstanding timepieces.

ABOVE: Chiming Jump Hour Ref. 5275 This commemorative Patek Philippe watch, presented in a classic tonneau-shaped case, combines three jumping indications with an acoustic indication at the top of every hour. A closer look at the Chiming Jump Hour reveals that the seconds hand jumps from one scale marker to the next in one-second steps. Otherwise, everything remains unhurried on the gold dial with the floral motif. But as soon as the seconds hand reaches the 60, the minute hand also jumps from one minute marker to the next. And finally, once an hour, the digital display in the aperture at 12 o’clock jumps to the new hour at precisely the same moment as the seconds and minute hands advance. A soft tone can be heard at this moment: the Chiming Jump Hour indicates the top of each hour acoustically as well. The watch pays tribute to the Ref. 3969 with a jumping digital hour, which was launched in 1989 on the occasion of Patek Philippe’s 150th anniversary. The Chiming Jump Hour Ref. 5275 is being crafted in a limited anniversary edition of 175 pieces.

This generation is no exception. With all eyes naturally on the star of the show, the Grandmaster Chime in its seven incarnations (at CHF 2.5 million each), the most complicated wristwatch ever produced by the family firm, the other pieces presented on the same occasion were understandably thrown into the shade. In order to redress this injustice, Europa Star has decided to pay tribute to these other exceptional watches, which all reflect the DNA and values of Patek Philippe.So what exactly are these famous values? “It’s very simple: honesty, hard work, and a consistent, logical, long-term vision – not getting trapped in short-term thinking. And it does not just apply to the members of my family: our 2,200 employees share these values,” Thierry Stern assures me. “I myself was trained in-house, by enthusiasts,” he continues. “They didn’t teach me how to make money, they taught me how to make beautiful products. That’s the only recipe for lasting success.” 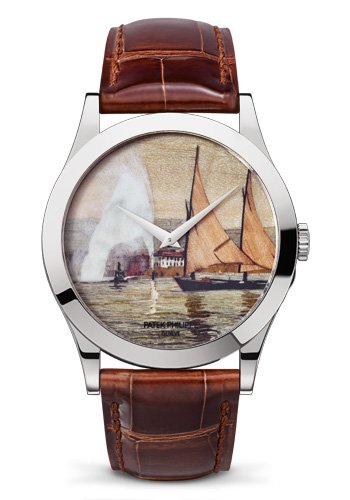 Patek Philippe Rare Handcrafts limited editions
Watchmaking has been intimately associated with the decorative arts for over 400 years: engraving, guilloché, enamelling, marquetry, gem-setting, skeletonising, and related techniques. To commemorate this year’s 175th anniversary, Patek Philippe is presenting a number of limited-edition Rare Handcrafts models that pay tribute to these incomparable artisanal skills. And no motif could be more appropriate than the city of Geneva with its landmarks, its citizens, and its harbour. Now, such motifs adorn a collection of forty unique or strictly limited-edition models featuring eclectic handcraft techniques to commemorate Patek Philippe’s anniversary: twenty wristwatches as well as twenty Dome table clocks and pocket watches with their respective holders. They all pay tribute to the different enamelling, engraving, marquetry, guillochage, and gem-setting techniques, individually and in combination.

The president of Patek Philippe introduced the results of seven years’ work. “It’s not just about complications: the design, materials such as enamel and even the choice of dial were also essential criteria.” The timepieces presented showcase traditional craftsmanship such as engraving, marquetry, guilloché and jewellery setting.