For the CEO of RJ-Romain Jerome, traditional watchmaking needs to embrace creative designs and new distribution channels. To attract the younger clients, cooperating with artists is particularly important. Explanations. 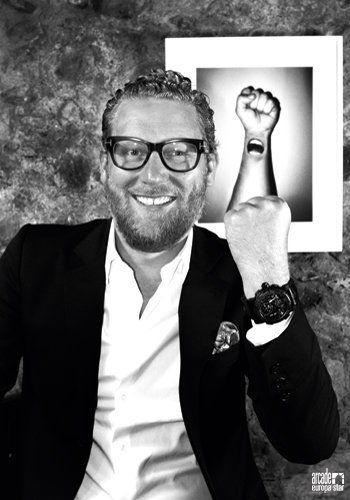 What is your perception of the watchmaking market today?

The watchmaking industry has to face changes in client consumption habits. It’s important to stay alert. Our client base is one of the youngest in the industry: they are hedonistic and creative, and they love a good story. They allow us to develop collaborations with contemporary artists, tattoo artists and retro-gaming companies. I also think that accessories will become more and more important in the world of watchmaking. With this in mind, we will soon be opening a showroom in Geneva that won’t be devoted exclusively to watches but will also offer a diverse range of products in the form of a gallery or a laboratory.

Will you then extend this retail concept to the rest of the world?

Yes, possibly. I believe the way we consume is about to change dramatically. For example, I hardly ever go to single brand boutiques anymore. I like being able to choose from a range of original products and I appreciate the creativeness of these retail environments. That’s why I am hoping to pursue this concept with our first showroom in Geneva. We are still discussing our retail concept but I already know that it will be open to products and artists.

Last year you celebrated the brand’s tenth anniversary. What chapter of this adventure stands out for you?

There have been so many anecdotes! However I would say that the Eyjafjallajökull-DNA timepiece is one of my favourite stories. I became CEO in January 2010, a few months before the Icelandic volcano erupted. I was looking for an ‘Earth’ Legend as we already had the Titanic-DNA (Sea) and the Moon-DNA (Air). Everyone was asking me what RJ’s next Legend was going to be. Of course there was a lot of speculation around the Great Wall of China and the Eiffel Tower, but it was too obvious, and I wanted to create something exceptional, unprecedented. When the volcano erupted and the European skies were paralysed, I took the opportunity to create a unique and highly emotional product. It really started out as a publicity stunt, as we didn’t have any material from the volcano when we launched the press release. We never thought demand would be so high, especially with an indicative price of CHF 50,000! When the orders started coming in, we had to find a solution and we were luckily contacted by the Nordic Volcanological Center. They sent us volcanic rock and ash from Eyjafjallajökull, we started production immediately and delivered the first watches in September of the same year. We adapted the price and have almost sold out of the 3rd edition of 99 pieces. Our customers include a couple who met whilst stranded in an airport waiting for their flight during the eruption!

After Tetris, RJ’s most recent collaboration, what other legends or icons do you plan on working with?

We are currently having discussions with a famous 1980s icon. Unlike most of our collaborations, this new associate has never partnered with a luxury brand before. We therefore have to reconcile the democratic aspect of the product and the luxury segment of fine watchmaking, which makes this partnership very interesting and exciting!We are always working on new collaborations or new models within the existing collections. Of course, some move forward faster than others but the ideal launch dates remain anniversaries, such as the 25th anniversary of the fall of the Berlin Wall, the 75th anniversary of Batman, or the 100th anniversary of the Titanic.