RENAISSANCE - Oris, the road to democracy


RENAISSANCE - Oris, the road to democracy

Oris is introducing its new Calibre 111, an original calibre that has been developed and designed entirely in-house, thus reconnecting with its past as a formidable manufacturer of mechanical movements. It is the reward for a lengthy journey and a democratic approach that it has never recanted. 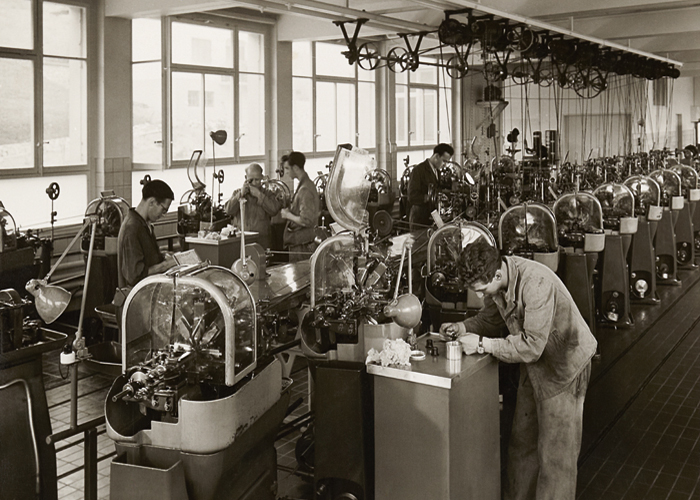 Democracy’, ‘citizenship’ and ‘real people’ are not terms we hear often in mechanical watchmaking circles, which prefer the smooth language of marketing, choosing to speak of ‘emotion’ and ‘craftsmanship’ rather than value for money or industry. And yet... these are the unexpected words that keep coming out of the mouth of Rolf Studer, vice-president of Oris. Is it perhaps just a different and more subtle kind of spin-doctoring? I can confirm that it isn’t! Everything points to these being genuine values that are implemented and followed through daily, and Oris’s entire history stands witness.

Created in 1904 by two natives of La Chaux-de-Fonds in the Waldenburg valley, Oris enjoyed a rich and varied industrial history that led at its height to its becoming one of the top ten watchmaking companies in the world, with close to 900 employees working on 279 calibres designed and manufactured in-house, building 1.2 million mechanical watches per year. When the blow came in 1982, the consequences were disastrous. Quartz swept everything before it, and when the ASSUAG was formed Oris was legally obliged to stop making mechanical movements, to the benefit of the fledgling ETA. It was at this point, the lowest point of its history, that two Oris executives decided to buy the company. Today Rolf Portmann is Oris’s honorary president and Ulrich W. Herzog is its primary shareholder and executive president. Shortly after the buyout the two men took a decision that at the time was considered at best deluded and, at worst, insane. In the raging heart of the quartz crisis, when the entire mechanical watch sector was in tatters, when no clients, retailers or distributors wanted to know, they completely turned their backs on quartz and decided to produce only mechanical watches. And they did so at prices that were consistently democratic and affordable, placing their faith in industrial production and refusing to compromise on quality. In an ironic twist, the turning point began with the ‘enemy’ – Japan – where the quartz tsunami had originated; while on a business trip Ulrich Herzog noted that the most fashion-conscious young Japanese were already beginning to go back to mechanical watches.More than thirty years later, we can safely say their bet paid off. The wheel has turned, their course has remained steady, useful innovations have followed, mechanical know-how has been retained, expanded even, through the development of a number of in-house modules. Success is on their side. With a presence in 80 markets, Rolf Studer says that Oris is now “gaining significant market share.” “The zeitgeist is on our side, and that is helping us a great deal,” he continues. _“You can sense a need to return to more solid values. Bling is out. People need more substance, but they don’t want to bankrupt themselves to buy a watch. There is also a better understanding of mechanical watchmaking. Consumers are better informed. All these factors are positive for us because we have never deviated from our mechanical line. We’ve taken a longer, harder road, but honesty pays off in the end, because it creates more substance. What is more, our independence gives us an important margin of freedom and allows us to focus on the essential: the product itself.” 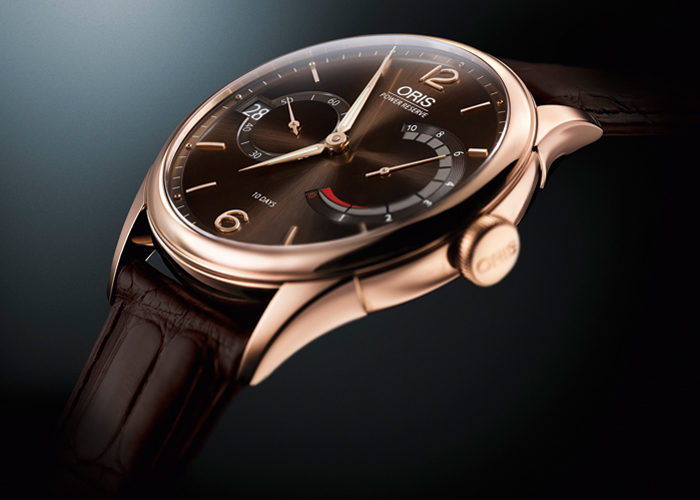 A PRODUCT ‘FOR THE PEOPLE’

So let’s talk about the product. “It’s a product for the people,” responds Rolf Studer. “That means, in the spirit of Bauhaus, outstanding quality, useful functions and a simple and readable design. The reality of mass-production has been central to this from the outset. The product reflects this, and it doesn’t lie, because its quality is also a consequence of its industrial manufacture and its production volume. Its ‘democratic’ pricing depends upon it.” [Editor’s note: the average price of an Oris watch is CHF 2,500.]Forced to halt movement production in 1982, Oris had to turn first to ETA, then to Sellita, which would become a very important partner. Despite this, the company nevertheless managed to hang on to its mechanical expertise. Since 1982, Oris has developed in-house a whole series of modules and mechanical innovations, such as the recent Depth Gauge, which uses water to measure depth, or the mechanical altimeter and barometer patented in 2014. Oris’s entire history is eloquent on this point; just look at the Pointer-Date, the Worldtime, the Artix chronograph with its countdown timer, the Pro-Diver Pointer Moon and numerous other innovations that have appeared over the decades.But looking back to the past, when the company was virtually destroyed by the crisis and the subsequent consolidation of the means of movement production with the ETA ‘conglomerate’ (which Rolf Studer likes to describe as “anti-democratic”) there is no doubt that Oris has more than got its own back. 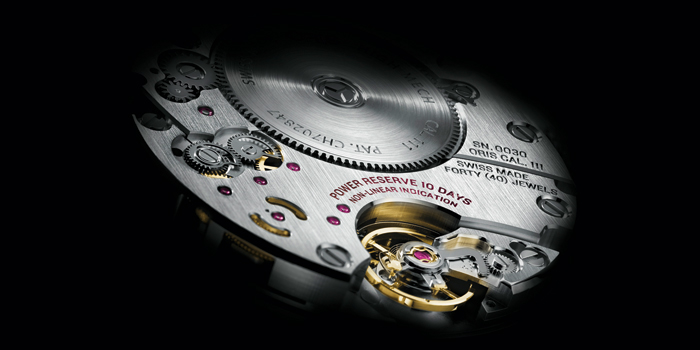 Having been put to the test with the Calibre 110, the technology deployed for this first special series was ready to be incorporated into the brand’s main collections. The Calibre 111 has the same movement architecture, the same combination of industrial and handcrafted finishes – the bridges are hand-polished and hand-chamfered – underlining the utilitarian appearance of the watch, but differs with the addition of a third complication in the form of a large date – a unique combination.

Oris, which designed and developed this new movement entirely in-house, is not yet equipped to produce every component internally. The parts are therefore manufactured by a series of partners along the Jurassic Arc, then all of them are checked, mounted and assembled at Oris.

For this important, perhaps crucial launch, Oris presents the Calibre 111 in a 43 mm round case. Its sleek, classical lines are available in steel (CHF 5,300) or rose gold (CHF 14,500). Eminently legible, graphically balanced and harmonious, with a domed sapphire crystal front and back and a screwed case back, the Calibre 111 collection comes with a choice of opaline silver-gold, maroon, sunray black-gold or silver-grey dial on a crocodile leather strap.

A PLAN FOR RECONQUEST

Although Oris had been thinking about it since the early 2000s the plan didn’t come together until 2011: Oris would once again begin producing its own mechanical movement. The spec sheet read as follows: a manually-wound movement, 190 components, power reserve of 10 days with a single large barrel, a non-linear power reserve indicator (patented: the needle accelerates as the barrel empties), a clean design and linear decoration bearing witness to its 100% Swiss industrial origins. This was the Calibre 110, presented in 2014, the year of the company’s 110th anniversary, which has been followed this year by the Calibre 111.“There are several reasons for this decision,” explains Rolf Studer. “As well as allowing us to reconnect with our industrial heritage as a movement manufacturer, we wanted to offer our clientele a movement of our own construction. A movement which, while demonstrating our abilities, remains in our typically affordable price range. It is nevertheless at the top end, coming in at around CHF 5,000. With this base movement we can develop new collections, expand our range and offer a number of price points. Initial reactions from our retailers and customers have been surprising and reassuring. The first anniversary series, limited to 110 units in gold, flew off the shelves, even though its price was exceptionally high for us at CHF 14,500. But we quickly realised that some are now looking at us differently. Retailers are more open to our proposals. Our long-term democratic strategy, ‘Real watches for real people’, seems to be coming into its own.”