WATCH EXPORT 2015: The Slowdown is Easier at the Top, but the Happy Few are Inceasingly Scarce


WATCH EXPORT 2015: The Slowdown is Easier at the Top, but the Happy Few are Inceasingly Scarce

In 2015, for the first time, watches priced at over CHF 15,000 (over CHF 35,000 retail price) constituted the biggest export category in terms of value. Analysis.

The resilience of luxury exports in times of crisis was confirmed in 2015. The category of watches over CHF 15,000, which had held up particularly well during the 2009 crisis, has experienced exceptional growth since then, reaching a record in 2014 of CHF 5.62 billion.

While this category experienced the smallest fall in value in 2015, the situation in terms of quantity is the opposite.

EVEN THE EXTREMES ARE MODERATING 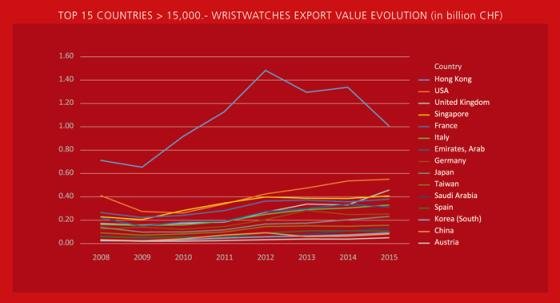 As every year, these figures do not take into account inter-market re-exports, or re-exports from the Swiss and Liechtenstein markets, whose importance remains directly proportional to the volume of tourists, largely from Asia, who travel there, and probably even in 2015 helped to make them one of the top five world markets for Swiss watchmaking. Also, the re-exportation system continues to produce a significant bias, as can be seen from the evolution of exports to the UAE, where many brands have set up Asian export hubs. Nevertheless, this study remains one of the only sources of reliable data on the evolution of a market whose development is always dependent on that of the extreme luxury sector, whether in a period of growth, or slowdown, or widespread crisis such as we saw in 2009, and that which our economies have been dealing with since 2015. At a time when the Swiss watch industry appears to be faced with another difficult choice between volume and exclusivity, the figures in our study cannot provide any definitive answers; they nevertheless offer a clear insight into the major trends in the current markets, and the increasingly deep rift between two diametrically opposed but strongly growing sectors: mass market and ultra-luxury.

As an adjunct to the official statistics of the Federation of the Swiss Watch Industry, which considers almost two-thirds of the total export value in one chunk – the notorious ‘over CHF 3,000’ category – Opus Magnum has for several years, in cooperation with the Swiss Customs Service, endeavoured to analyse these export figures in a way that is more representative of the evolution and structure of the market. This has led to the identification of four main price categories, each representing around 25% of export value, along with seven further sub-categories in the ‘over CHF 3,000’ segment to supplement the values defined by the FH. This has made it possible to paint a far more granular and representative picture of how the market, which for a number of years has been characterised by an increasingly important luxury sector, is evolving.

For further details, please contact the authors of this study: [email protected]