This ‘romantic’ brand with a strong client base in China, known for its logo of a dancing couple, is now hoping to revive the spark with its old flames in Europe and the USA. We take a look at its history.

"It is not as easy as one might think to treat these matters as one would wish, particularly when one is embarking upon such a complex endeavour.” The letter is dated 1859, but the content remains highly relevant as far as the watch industry is concerned. The letter was signed by Jules Borel and Paul Courvoisier, who three years earlier had got together to set up a watch workshop that would become one of the oldest manufactures in the town of Neuchâtel.

The two entrepreneurs were new to watchmaking, and had neither inherited savoir-faire nor extensive networks to rely upon, yet they were determined to set themselves up as producers of meticulously crafted watches, as we can see from another letter from the time: “The Maison will concern itself mainly with good watches, preferably gold (...); we have no intention of producing dross.” Watch manufacturing in Neuchâtel at the time was not necessarily synonymous with high quality, and its products had acquired a somewhat poor reputation. The new brand was hoping to distance itself from this. The first foreign buyers, in 1859, were companies based in Hamburg, Genoa, London and the United States, which was a particularly important market. Members of both families travelled widely and made the most of all available distribution channels, including local Swiss consulates! It was around that time that the company began to forge links with China, which would eventually become its main market. The strong relationship would later prove decisive. The Communist regime, which came to power in 1949, was in favour of domestic production, but the personal contacts Borel had built up over the years enabled the company to maintain its relationship with China. The brand had a strong focus on the Middle Kingdom well before the boom of the noughties, and its trajectory over recent decades has been marked by the surge in the Asian market. Today the company has a solid customer base in Hong Kong, but it is hoping to re- establish itself outside its historic hunting grounds. Under the influence of its current CEO, Renaud de Retz, it has turned its attention back to the United States, India, the Middle East, Europe and Oceania. 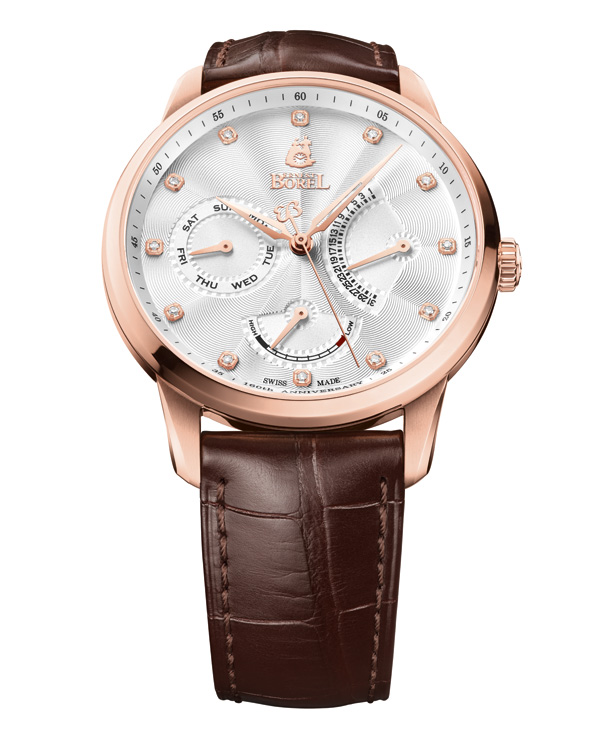 Ernest Borel is readily identified by its logo depicting two dancing figures, inspired, we are told, by a waltz its founder once enjoyed with a gracious damsel. The brand’s communication and identity continue to focus on a romanticism that has become a symbol of the company. Even today, Ernest Borel still offers many watches for couples in its (numerous) collections. Other references are more sporty: Ernest Borel is one of the major clients for COSC certification. To celebrate its 160th anniversary the brand has unveiled a collection designed as a tribute to its founder, Jules Borel, with ten new models, including one in a limited run of 888.