Founded in 2006 with the aim of preserving the artisanal expertise of the Franches Montagnes, which was in danger of dying out, the brand based in the Jura has nevertheless not been afraid to innovate, as its Harmonious Oscillator amply demonstrates. Its newest model places case decorating techniques in centre stage.

This is a young brand, but its aim is to preserve the knowledge of centuries. Since 2006 Rudis Sylva has been working to ‘aggregate’ the skills of watchmakers from the Franches Montagnes, in the Swiss Jura. This is the land of the famous farmer- watchmakers, to whom the brand’s founder, Jacky Epitaux, has dedicated a museum in the small village of Les Bois, where Rudis Sylva has its headquarters. The idea behind Rudis Sylva was to collate what remained of this heritage and preserve the skills of the last of the watchmakers of the Franches Montagnes. All that remained was to find the right product. That is where the Harmonious Oscillator came in. Launched in 2009, it put the company’s name on the world’s watchmaking map. This revolutionary movement comprises two toothed, interlinked balances. The symmetry and energy of the balance springs are constantly opposed, enabling instantaneous average correction in the vertical position, which eliminates the effect of gravity. The construction has a more accurate setting capacity than a conventional tourbillon, thanks in particular to the asymmetric deployment of the balance springs in all positions – hence the name Harmonious Oscillator.

For its tenth anniversary Rudis Sylva is introducing a new pocket watch in rose gold, equipped with the Harmonious Oscillator. Particular effort was made with the case decoration. The cases of Noirmont, the next village over from Rudis Sylva, have always been highly prized. In 1906 some 636,000 cases in precious metals were produced there. “Just a few steps away from here, we found one of the heirs of those days, Georges Cattin, who still performs the technique of fluting or knurling using a home-made machine,” explains Jacky Epitaux. “The machine is equipped with a contoured knurling-roller made of hardened steel, which compresses the perimeter of the case, giving it a structured and regularly patterned profile. It’s a technique that is rarely used these days, because the tools and knowledge have virtually disappeared.” This limited series of ten, priced at CHF 280,000 each, is named ‘Poilie’. Why? “That was the name given to the inhabitants of the Noirmont. It referred to their woodcutting past, when they used to sell ‘la poix’ or resin, as it is more usually known.” 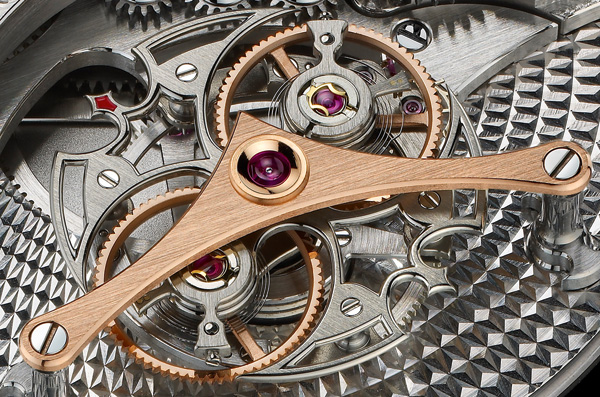