Founded by a Geneva electroplating specialist, the brand is celebrating its second anniversary. It offers bold and affordable personalised models, nut-shaped and luminescent. A frank and plain-spoken interview with Stéphane Greco. 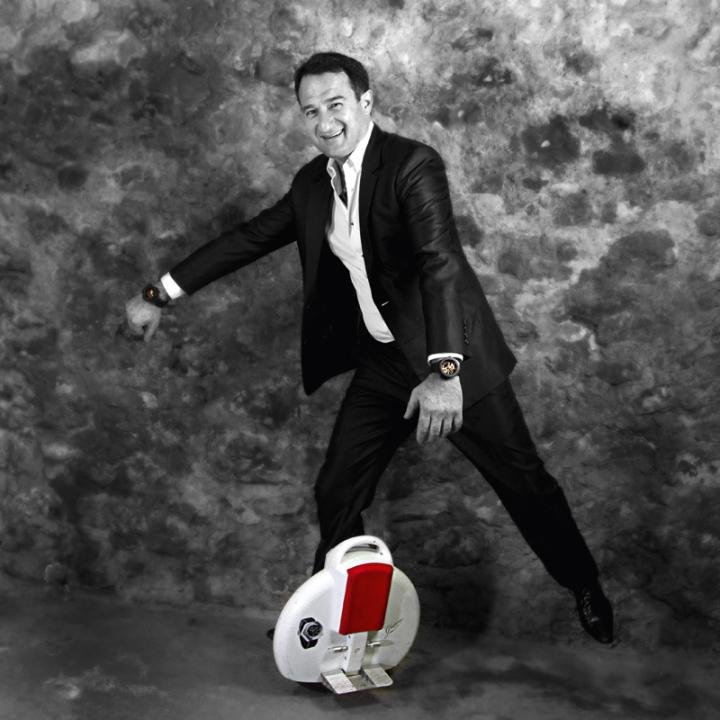 Stéphane Greco - Photo: Carlo Fachini
Object : selfbalancing vehicle
«I’ve been riding around on this selfbalancing vehicle for two years. This is not necessarily natural, you need about ten hours of training to get used to. It allows me to navigate quickly in town and it is a somewhat futuristic object that satisfies the science fiction in me. »

“ I’m from Reims in France. I had no vineyards, so I launched into watchmaking,” Stephen Greco jokes, with his usual self-assurance. He decided at a very young age to specialise in electroplating. After settling in Switzerland in 1991, he worked successively at ETA,  Rolex, Stern Creations, and finally Franck  Muller, before going freelance.

His most vivid memory is of Franck Muller, where he was given carte blanche and worked not only on movements and dials, but also on watch casings. “He was my mentor, someone very human, creative and sensitive, who gave newcomers a chance. I thought that when he left, I would set up my own company, which occurred in 2004. He always supported me and offered me good advice. He told me never to look back and to take responsibility for the choices I made.“

Admittedly, Stéphane Greco cultivates a spirit of independence and demonstrates a strong character! It was therefore inevitable that he would eventually stand on its own. “As soon as I joined the company, I wanted to be my own boss, to have a form of freedom. I prefer to work freely 16 hours a day rather than 8 hours feeling cramped. Today I can choose my clients, even if the context is difficult and I am increasingly annoyed by useless standards. This is not pretentious on my part.”

Today, with his Rhodior company, he supplies many watchmakers: Roger  Dubuis, Frédérique Constant, Dubois & Fils, Patek Philippe, Harr Winston, Vacheron Constantin, MB&F, Bovet Fleurier, Ludovic Ballouard and Antoine  Preziuso. He considers electroplating, however, as a fairly thankless profession: “You’re usually working in the shadows, except when there’s a problem — and then it’s a cataclysm! Mechanical watchmaking is logical, but its chemistry is tricky. A storm can disrupt the balance of my baths. You need to understand what lies at the heart of the material. It is like painting: if you want to paint a wall in pink, you’re bound to notice some unevenness.“

He became tired of purchasing watches from his clients, and felt an urge to make them himself... Two years ago, he launched his own brand, Greco Genève. His emblematic hallmark: the nut-shaped watch, for a retail price ranging from 5,000 to 12,000 francs. Stéphane Greco is a car enthusiast: he established his “meteoric” showroom in Lamborghini’s Geneva garage! “It was interesting to design a watch that does not have the shape of a watch. I’m working on series of eight copies for the collection of nut-shaped watches; otherwise, I only create unique pieces.” 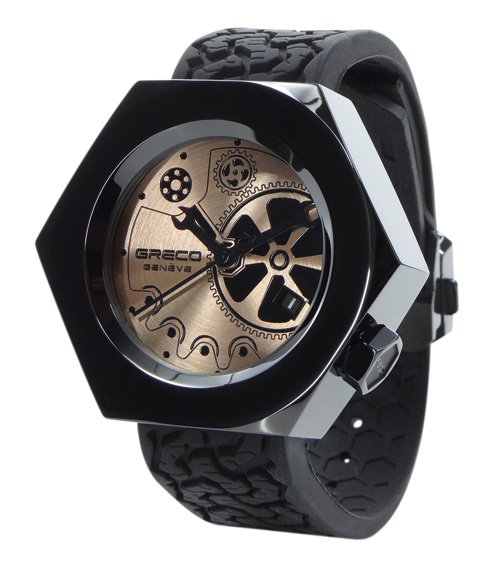 The nut collection was called “Modern Times”, in reference to Charlie Chaplin’s film where he is caught in the wheels of an assembly line. The square collection “Timesquare” is both for men and women; the round “Timelace” collection is very airy in comparison; “Trancetime” is a fully fluorescent collection; finally, there is the Asteroid model ... “A concept- watch, the first “galactic” model — I would not sell it for less than a million francs. I am a trained crystallographer and gemologist and I love stones, science-fiction ... I use a fragment of an iron meteorite that fell 5,000 years ago in Campo del Cielo in Argentina. Antoine Preziuso and Rolex had already produced meteorite dials but here I use a rough meteorite. And unlike stony meteorites, iron meteorites are very rare.

Stéphane Greco has invested CHF 1.5 million — all of Rhodior’s profits — in developing his watches. It took him years to design his fluorescent paint, used on the meteorite model, which is more powerful than Superluminova. The story is incredible: “Central banks have a monopoly on these anti-counterfeiting pigments but I had managed to get some samples. One day I received a call from the European Central Bank: they raided my premises to find out what I was up to. They were very serious but when I turned off the light and showed them my fluorescent watches, they were very quickly impressed and reassured. They authorised me to order an unlimited amount of pigments, but only once. I emptied my bank account and spent 25,000 francs, enough to last for generations because trace amounts of pigments are sufficient.”

What are the results two years later? “For sure, I launched a brand at the wrong time... The beginnings were difficult... But I feel that customers are waking up. I’m in an affordable and reasonable price segment for unique Swiss-made pieces. But as the crisis worsens, I sell more square and more conventional watches. “

Stéphane Greco, who crafts practically only personalised watches, operates directly as well as through agents: “Retailers take the mickey, one of them came to see me at Baselworld and wanted to take a 75% commission! They are used to wild margins. On the other hand, agents just take 20% and consignment stock. Furthermore, you must be in the dark and use UV mode to see the fluorescence — hardly ideal for a storefront retailer... My hopes rest with the United States, France and Switzerland first. These fluorescent watches are well suited to the night world, for DJ’s for example.