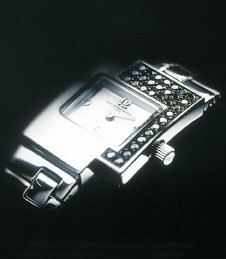 Balenciaga watches are designed, manufactured and distributed under licence by Christian Bernard Diffusion. Based in Paris, the Christian Bernard Group is one of France's leading manufacturers of watches and jewellery. With 2,000 points of sale the Group, which in addition to Balenciaga watches includes Louis Féraud, Diamanti, Fontenay and Alan Still, has annual sales of around US$ 150 million and nearly 700 employees. 90% of the Balenciaga watches, which first appeared in 2001, are ladies' watches and are Made in France.
The fashion house of Balenciaga, which remains a reference in the domain of fashion design, was founded in 1919 by the Spanish-born couturier Cristobal Balenciaga.